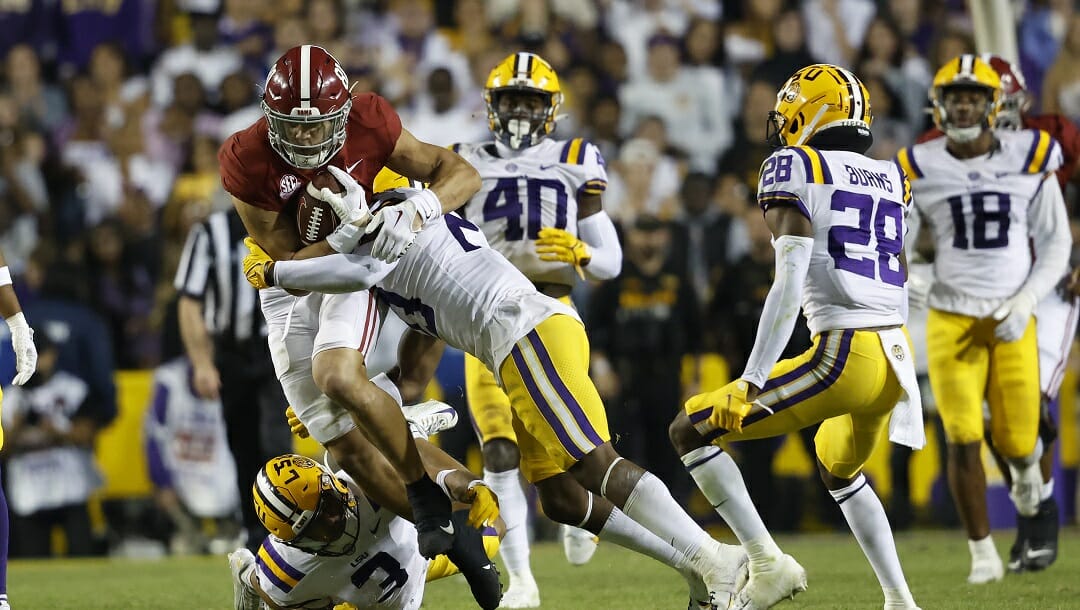 You don’t have to be an expert in online sports betting to know that Georgia and Ohio State are all huge playoff favorites at this point in the season.

That leaves an obvious question that will play out throughout the rest of the year: Who are the other two teams most likely to be included in the 2022 College Football Playoff?

Here, I’ll look at some of the most likely candidates every week.

When Do the Next College Football Playoff Rankings Come Out?

The College Football Playoff Committee will release their new set of rankings on Tuesday, Nov. 22 at 7 p.m. on ESPN.

When Did the First College Football Playoff Rankings Come Out?

The first College Football Playoff Rankings for the 2022 season were revealed on Tuesday, November 1.

Here are the teams I consider the most likely contenders for the final two playoff spots. They are listed in descending order.

Michigan: Win and You’re In

Michigan’s path to the playoff is the simplest of any team on this list.

If the Wolverines beat Ohio State in Columbus, they will win the Big Ten East and go to the conference championship game.

If they win the Big Ten championship and finish the season undefeated, they’ll certainly be in the College Football Playoff.

On the other hand, a Michigan team without a win over Ohio State will likely have too light a resume to stand out against other CFP contenders.

It’s not fair to TCU, but we have too much evidence that Big 12 playoff contenders outside of Norman, Oklahoma don’t get the benefit of the doubt.

TCU has assembled an impressive playoff resume, in part because the Big 12 offers true 1-to-10 depth this year that no other conference can match.

History tells us that likely won’t be enough for the committee unless most other contenders self-sabotage and remove themselves from contention. TCU needs to be 13-0 with a conference title in hand to truly feel safe.

Personally, I am wildly unimpressed by USC this year. Caleb Williams and the offense have been sensational, but the Trojans have played bad teams uncomfortably close. They’ve also failed to show any semblance of a playoff-caliber defense.

In other words, it’s a classic Lincoln Riley team.

If USC can finish as a 12-1 Pac-12 champion while other teams fall around them, there’s a chance the Trojans could hear their name called in December. But USC has spent most of the year overrated by college football odds markets, and I think most analysts and committee members likely feel the same way. The body of work just isn’t there.

The ACC has posted another mostly uninspiring season of football. Top-half teams like NC State and Louisville have dealt with injuries and consistency problems, and the Coastal division is – as usual – a total mess.

Clemson has given the conference a heavyweight presence in past years, but its 1-loss status and noticeably pedestrian offense hasn’t inspired much belief this year.

Still, it would be foolish to write off the ACC as non-factors in the playoff discussion.

At this point, the college football betting world knows it’s going to be Clemson vs. UNC in Charlotte on Dec. 3. Depending on what happens with other conference contenders, ACC champion Clemson could slide right into the No. 4 playoff berth.

LSU: Tigers Clinch a Berth in the SEC Championship Game

The College Football Playoff Committee has never included a two-loss team in the field. But if LSU gets to the end of the season and still only has two losses, though, it will have a compelling case to present.

At 11-2, LSU would be SEC champion with wins over both Georgia and Alabama. The top line of its resume would be stronger than most other playoff hopefuls.

The problem, of course, is beating Georgia in Atlanta. From my view, LSU looks ahead of schedule with Brian Kelly; this looks like a team that’s growing every week and happened to beat Alabama on a high-leverage, walk-off-the-field 2-point conversion play. I’m not sure the roster is playoff-caliber just yet.

If LSU can score an upset in the SEC title game, it has a chance at the field of four. I’m just not sure how realistic it is to expect that upset.

This is a cynical inclusion, but I (along with many other college football fans) will only truly believe Alabama is dead and buried for the playoff when the final field is announced and the Crimson Tide are nowhere on the screen.

That said, it would take true chaos for this to materialize. Tennessee has now lost to South Carolina; Alabama will also need LSU to get rocked by Georgia in the SEC Championship Game.

Then, TCU would need to lose at least one game in the Big 12. Let’s deal USC a loss in the Pac-12 title game, too, just to make sure.

North Carolina lost a head-scratcher to Georgia Tech this past weekend; it could turn around and beat Clemson in the ACC Championship Game, ostensibly knocking the ACC out of realistic playoff contention.

If all that happens, Alabama would still have a shot at a bid simply because the rest of the field took itself out. We know winning brands and cultures get the benefit of the doubt; we also know it matters when you lose. Alabama’s losses came early, which can only help Nick Saban.

The Vols might not have controlled their destiny, but a 1-loss team with good wins in the SEC East would have commanded a certain degree of respect in the final playoff rankings. That’s true even without the added data point of a conference championship game.

Saturday’s Hendon Hooker injury and the Tennessee/South Carolina football score changes all that.

Knoxville was the toast of this year’s college football season, but the Vols are all but eliminated from contention at this point.

For more helpful information on this season’s college football landscape, be sure to check out The Lion’s Edge for intelligent, weekly insights into trends and betting tips across the online sports betting world.