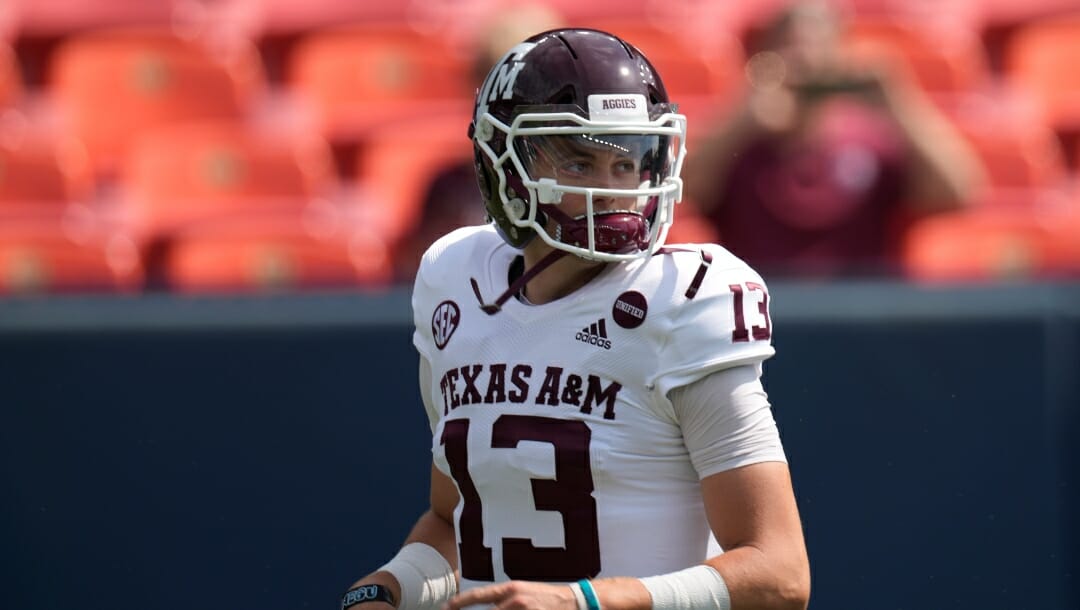 To compete for a national championship in the College Football Playoff era, not only is elite talent mandatory, but a “super quarterback” probably needs to be under center as well.

Gone are the days of Craig Krenzel and Greg McElroy.

That’s to say nothing of the pre-BCS era of college football when Jay Barker could win a national championship with 1,614 yards passing, seven touchdowns, and nine interceptions (no, those are not typos). Barker had more turnovers than touchdowns and still won the title in 1992 for Alabama.

Bryce Young could do that in three games — minus all the interceptions, of course.

So what about Stetson Bennett and Georgia?

While the walk-on isn’t a “super quarterback,” and has very little NFL upside, the Bulldogs quarterback played near-perfect football and had a supporting defensive cast that was a generational exception.

Bennett also tallied 30 touchdowns and had over 3,200 yards of offense while finishing fourth in the nation in QB rating (176.69) and third in yards per attempt (10.0). So, sure, if a program boasts the best defense in four decades and gets supremely efficient QB play, yes, it can still buck the trend.

Alabama and Ohio State enter 2022 with established super quarterbacks in Young and C.J. Stroud respectively. They are the two front-runners for the Heisman Trophy and Bennett returns with yet another elite defense and some extra jewelry.

But there are plenty of teams capable of reaching the College Football Playoff and being part of the national title race if they can find a capable player under center.

Texas A&M and Jimbo Fisher are atop the list.

Redshirt sophomore Haynes King has extraordinary athleticism and was poised for a big first year in College Station last fall before an injury derailed his entire season just two passes into Week 2. He will have to battle LSU transfer Max Johnson and uber-recruit Conner Weigman for the starting job. If he wins it and develops like many think he can, Fisher could have his best offense in six years at Texas A&M.

The Aggies are one of the few teams who are talented enough across the board to compete with Alabama, Ohio State, and Georgia. But only if they find a playmaker at quarterback.

Playoff teams from a year ago Michigan and Cincinnati both have fascinating decisions this offseason at quarterback and how those battles play out will likely determine if either can return to the College Football Playoff. However, they are two very different situations.

Michigan returns veteran Cade McNamara, who just led the most successful Michigan football team in 20 years. Yet, backup J.J. McCarthy is the one garnering all the headlines this offseason in Ann Arbor. His electric dual-threat ability make him the far more talented player, and after getting lots of spot duty last year on a championship team, he is poised to wrestle the job from McNamara.

Cincinnati’s Luke Fickell has a far more difficult task in trying to replace Desmond Ridder. The soon-to-be NFL quarterback was 33-5 as a starter for the Bearcats and will be missed. But the Bearcats have far more depth at the position than any other Group of 5 team in America.

Former four-star and top-10 dual-threat recruit Evan Prater is the favorite over veteran transfer Ben Bryant, who threw for over 3,000 yards last season at Eastern Michigan. Prater is in line to start for Fickell but Bryant isn’t a normal transfer. He actually began his career with Cincinnati before getting a year of experience in Ypsilanti while Ridder played out his career last fall and has since transferred back to try to win the starting job.

If either McCarthy or Prater wins the job and delivers on their enormous potential, both Michigan and Cincinnati will be challenging for a playoff spot in 2022.

Notre Dame and Clemson are both contenders as well. But only if their top-100 recruits become stars.

D.J. Uiagalelei has played a lot of football for the Tigers and has yet to show why he was a five-star prospect. Clemson’s playoff hopes are tied directly to the development of their quarterback and his talent is still painfully obvious. Remember, Joe Burrow took four years to become Joe Cool.

However, if he doesn’t show progress, yet another five-star freshman Cade Klubnik will be waiting to steal reps for the Tigers.

If first-year head coach Marcus Freeman has a player who can do everything on offense, Notre Dame could easily find its way into the playoff race. Buchner will have to hold off teammate Drew Pyne this offseason to earn the keys to the offense but all signs point to the electric young Buchner as the future in South Bend.

Either Clemson or Notre Dame could easily get into the playoffs if they got elite quarterback play this fall.

Oregon has a veteran with tons of talent but lots of baggage in former Auburn Tiger Bo Nix.

Nix is reuniting with his former offensive coordinator Kenny Dillingham and that should give him an edge for the starting job in Eugene. But five-star, second-year signal-caller Ty Thompson is the future for new coach Dan Lanning.

If Thompson is good enough to win the job over a player who’s started more than 30 games in the SEC, then the Ducks could easily leapfrog Utah and USC into the Pac-12 driver’s seat. Only the conference champion will have a shot at getting into the College Football Playoff. (Caleb Williams at USC could also single-handedly carry USC to the playoff but there is no QB battle in Los Angeles.)

Elite, unproven, five-star, dual-threat talented quarterbacks are littered across college football this offseason. Legitimate national title contenders from every corner of the country are one very difficult decision away from having a playoff-caliber roster.

Not all of them will develop into mega stars, but the ones who do will be competing for a national championship sooner rather than later.