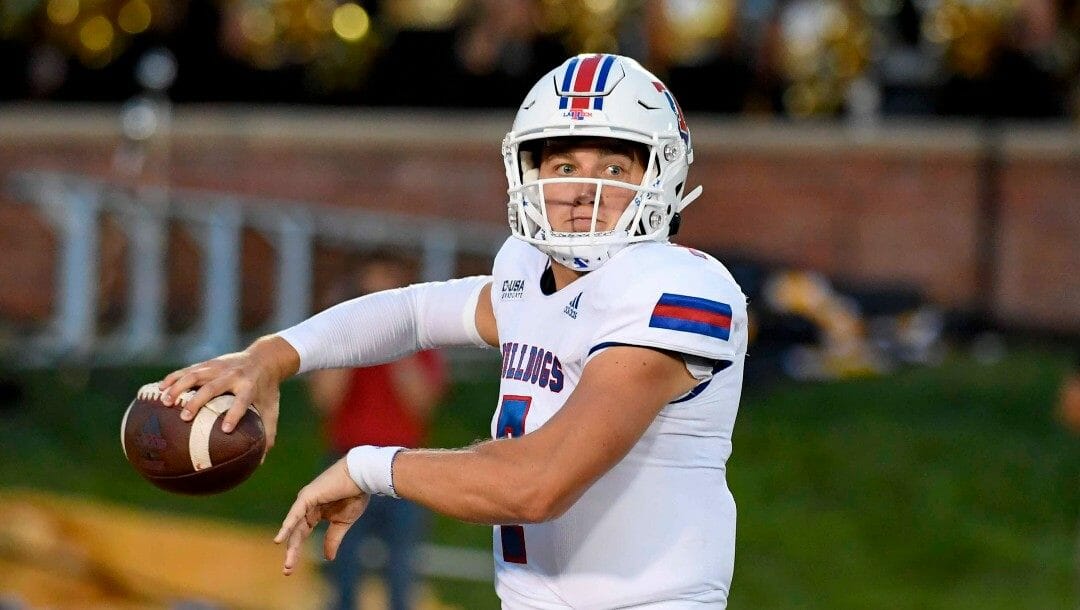 College football realignment this summer reminded me of a middle school cafeteria – no loyalty, just jockeying for the prime lunch spot. And it will lead to some sensational matchups each year in college football betting.

Oklahoma and Texas are leaving for the SEC, prompting the Big 12 to invite three schools from the American Athletic Conference – Houston, Cincinnati, and UCF. The AAC turned around and grabbed six schools from Conference USA – Charlotte, Florida Atlantic, North Texas, Rice, UAB, and UTSA.

There was no stopping Tulsa quarterback Davis Brin Saturday night, as the Golden Hurricane defeated the Jacksonville State Gamecocks 54-17.

The senior quarterback passed for 424 yards and four touchdowns, often connecting with Keylon Stokes, who finished with nine catches for 153 yards and one touchdown. Tulsa finished with 619 yards and 29 first downs. The Jax State offense, which entered the game 456 yards per game, was limited to just 295 by the Golden Hurricane.

The Demon Deacons relied heavily on the passing game, led by quarterback Sam Hartman who threw for 325 yards and three touchdowns. Hartman became the career passing leader for Wake Forest with more than 9,700 yards.

Liberty quarterback Kaidon Salter threw three first-half interceptions, but the Flames managed to hang on until the bitter end. A successful 2-point conversion early in the third quarter gave Hugh Freeze the confidence to go for the win instead of the overtime, but Wake’s defense stood tall.

La Tech quarterback Parker McNeil threw two interceptions that changed the pace, giving the Tigers some much-needed momentum. And sophomore running back Will Shipley ran with it, finishing with a career-high 139 yards and two touchdowns, averaging 11.6 yards per game. He’s also the first Tiger to have two or more touchdowns in each of the season’s first three games, according to Clemson’s records that go back to 1950.

Conference gets a much-needed W here with Middle Tennessee’s 49-6 victory over Tennessee State in front of the biggest home crowd in five years Saturday.

The Blue Raiders shut the Tigers out 42-0 in the first half. They boasted a new heavy offensive look complete with defensive lineman lined up as fullbacks, paving the way for sophomore running back Frank Peasant, who finished with 122 yards off of 13 carries and three touchdowns. MTSU’s defense had two big interceptions in the first half that got things rolling.

Special teams even got in on the fun – defensive end Taharin Sudderth blocked a punt, and Jalen Montgomery picked it up and ran it back for a touchdown.

The Aggies dropped a tough one to Wisconsin this weekend, 66-7.

Not much to say other than New Mexico State struggled to move the ball against the Badgers’ Big Ten defense. Head coach Jerry Kill tried to switch things up after starting quarterback Diego Pavia struggled to get any offense going. Still, backup quarterback Gavin Frakes proceeded to throw two incompletions, earn a delay-of-game penalty on third down and surrender an interception.

The only other Conference USA win came from Sam Houston State, who defeated Texas A&M-Commerce 27-17 in Huntsville on Saturday, earning the Bearkats their first win of the season. Sam Houston State led 10-0 at the half.

Quarterback Jordan Yates threw an interception that let TAMUC back in the game, so the Bearkats went with backup quarterback Keegan Shoemaker on the next play. Shoemaker finished 6-of-13 for 38 yards and one touchdown. Running back Zach Hrbacek held it down on the ground, finishing with 131 yards off of 19 carries and one touchdown.

The Miners struggled to find the endzone in their 27-10 loss to New Mexico in Albuquerque Saturday night.

UTEP only managed 76 yards of offense in the first half and 82 in the second half. Plus, they committed seven turnovers, their most in a game since 2005. The heartbreaking moment of the game was when wide receiver Tyrin Smith caught a career-long 76-yard pass only to be stripped at the goal line, resulting in a touchback and the Lobo’s ball. Ouch.

Smith did have a career-high 183 yards on eight catches.

The Hoosiers topped WKU 33-30 in overtime on Saturday in Bloomington despite the Hilltoppers possessing the lead until the almost-bitter end. With 47 seconds left in the game, the Hoosiers tied the game with a 4-yard touchdown pass from quarterback Connor Bazelak to Cam Camper and a successful 2-point conversion to send the game into overtime after the Hilltoppers kicker missed a field goal to win the game.

Indiana blocked a field goal in OT and set up kicker Charles Campbell for the game-winning 51-yarder. The victory was IU’s second comeback fourth-quarter win of the season.