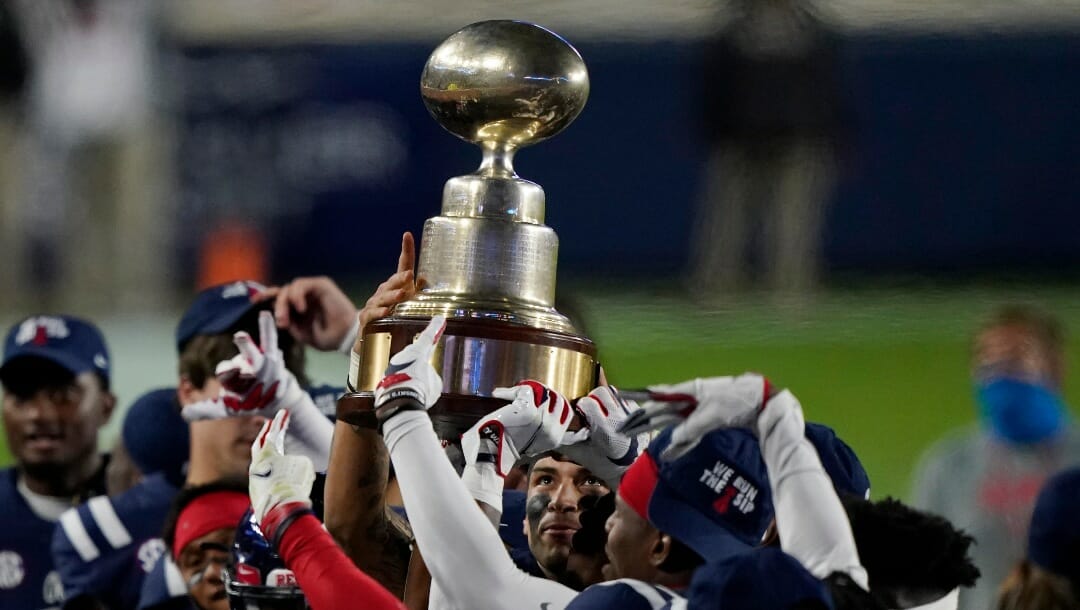 The Ole Miss vs. Mississippi State rivalry dates back to 1901, and they have played for the Golden Egg Trophy since 1927. Hence the name, the Egg Bowl.

The game is played annually on the regular season’s final week and typically has small spreads in college football odds.

Next Matchup: November 24 at Ole Miss

It was a ranked matchup to end the 1999 season as the No. 23 Rebels traveled to Starkville to take on the No. 18 Bulldogs. Early on, it looked like there was an upset brewing as the Rebels raced out to an early 10-0 lead and led 20-6 midway through the third quarter.

However, the Bulldogs had some fourth-quarter magic up their sleeves. Mississippi State tied the game at 20 on a 38-yard pass from Wayne Madkin to C.J. Sirmones with 27 seconds left.

Ole Miss decided to roll the dice and get into field goal range to win in regulation. However, Ole Miss quarterback Romaro Miller had his pass intercepted at the Mississippi State 47-yard line by Eugene Clinton and returned to the Ole Miss 26-yard line. Bulldog kicker Scott Westerfield would nail a 47-yard field goal for the win.

This game was played in Jackson, Mississippi, and shows why rivalry games are so fun. Ole Miss came into the game with a 3-6-1 record, while the Bulldogs were 7-3 and ranked in the top 10. In a back-and-forth thriller, the Rebels struck the final blow with a go-ahead touchdown with two seconds left.

Moncrief had a monster game in the 2012 Egg Bowl as he made seven catches for 173 yards and three touchdowns in the Rebels’ 41-24 upset of the Bulldogs.