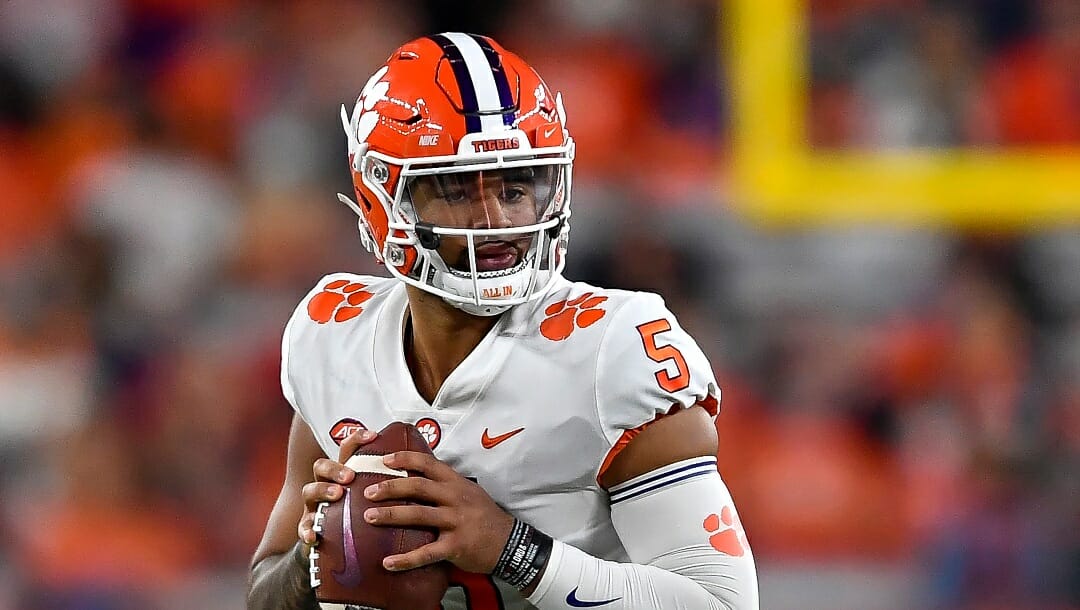 Defending national champion Georgia sits in a tie with Alabama, Ohio State, and Clemson for the highest win totals (10.5) at the online sportsbook. Four other schools boast win totals of 9.5, including Michigan coming off their first appearance in the College Football Playoff last year.

Here’s a deeper look at the teams with the highest totals for 2022:

Led by Bryce Young and Will Anderson Jr., Alabama is poised to enter the year with high expectations.

Stetson Bennett and the Georgia Bulldogs should be a threat to win another championship this season. Tight end Brock Bowers is almost uncoverable on offense, and while the defense was gutted by NFL departures, they have the personnel to avoid a major drop-off.

The Bulldogs open the season against Oregon and will also see Auburn, Florida, and Tennessee in conference play.

After a loss to Georgia in their opener last season to Georgia, things went off the rails for the Clemson Tigers.

Even with a difficult year for Dabo Swinney and company, the Tigers could be right back amongst the top teams in college football this season. An early-November trip to Notre Dame will be a pivotal game in hitting this win total. It’s one of only four true road games for Clemson.

Much like the Tigers, the Ohio State Buckeyes also have Notre Dame on their schedule, along with Penn State on the road at Beaver Stadium and Michigan at the Horseshoe.

C.J. Stroud and Jaxon Smith-Njigba should boast one of the best quarterback-wide receiver duos in the nation. Putting up points and keeping teams off the scoreboard shouldn’t be an issue this season for Ohio State, who likely will build off last season’s dramatic Rose Bowl victory. This roster is as close to elite as you can get and this Buckeyes team should go over the number in 2022.

Expectations are through the roof for USC this season.

Will Lincoln Riley be able to transform the illustrious program overnight, and can Caleb Williams show more consistency this time around in his offense? T

hose are some of the main concerns surrounding this team, along with a tough schedule that includes Utah on the road and Notre Dame.

It’s going to be interesting to see how Brent Venables does in his first season as head coach after the departure of Lincoln Riley.

Texas and Baylor present two great challenges on the Sooners schedule, and even if there’s a lot to like about this roster, including likely starting quarterback Dillon Gabriel, the Big 12 could boast impressive depth.

Jim Harbaugh helped lead Michigan back to relevance last season before being blown out by Georgia in the College Football Playoff.

The Wolverines finish their regular-season schedule on the road at Ohio State, which should be a good revenge spot for the Buckeyes after the Wolverines ruined their playoff hopes last season. Even with a blemish on their schedule from the Buckeyes, Michigan could still find a way to go over the number of 9.5

Marcus Freeman may have a bright future as the head coach of Notre Dame, but his opening tenure might be a difficult one with some of the matchups on their schedule.

The Fighting Irish have Ohio State, Clemson, and USC on the schedule in Freeman’s first season.