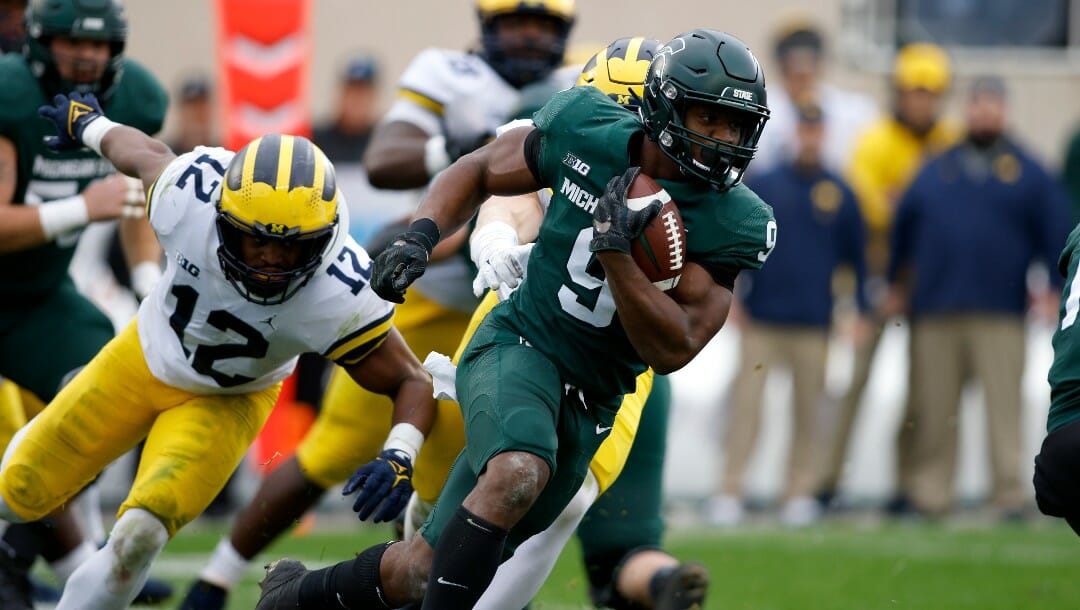 The Big Ten Conference has plenty of trophy games to go around, with the Paul Bunyan Trophy going to the winner of one of the most heated rivalries in not just the Midwest but all of college football, when the Michigan Wolverines take on the Michigan State Spartans for Mitten State supremacy.

The rivalry has had sensational moments on and off the field, especially since 2007. It’s a series that began in 1898, but the Paul Bunyan trophy was not introduced until 1953 to mark MSU’s acceptance into the Big Ten. As both teams look to stay within reach in Big Ten Championship odds at the online sportsbook, here’s a look at the rivalry.

The best game in the series was in 2004, when an underperforming Spartans team faced the 11th-ranked Wolverines.

Michigan State held a 27-10 lead with 8:43 left in regulation when Michigan began its comeback. A Garrett Rivas field goal and two Braylon Edwards touchdown catch in less than six minutes of game time sent it to overtime.

The Spartans and Wolverines traded field goals, and touchdowns in the first two overtimes before Michigan finally won, thanks to another Edwards TD, which he scored on a 24-yard pass. After the two-point conversion, the Wolverines stopped the Spartans from holding on to Paul Bunyan.

The 1978 edition of the Paul Bunyan game featured a hero that most people will know from his time in Major League Baseball, Kirk Gibson. The Wolverines entered the game ranked fifth in the nation, while the Spartans were 1-3.

Michigan State would go on to shock the Wolverines 24-15 behind 496 yards of offense, including Gibson’s five catches for 82 yards. The Spartans took home Paul Bunyan, for the first time in eight tries, as the victory catapulted them to a seven-game winning streak and a share of the Big Ten title with Michigan.

It was tough to pick between Kenneth Walker III’s 197-yard, five-touchdown performance in 2021 and Braylon Edward’s 11-catch, 189-yard, three-touchdown heroics in the Michigan comeback in 2004.

Walker III’s performance – after a College GameDay appearance – is slightly more impressive given that the Wake Forest transfer did that to the eventual Big Ten champions and a defense that was one of the best in the country.

College football odds are available at BetMGM throughout the year. And with live sports betting, there’s never a break in the action.

Available for hundreds of games each year, live betting allows you to place live wagers as you’re watching a game from home, the bar, or stands. Whether you like to bet on spreads, over/under totals, or moneylines, there’s something for everyone!