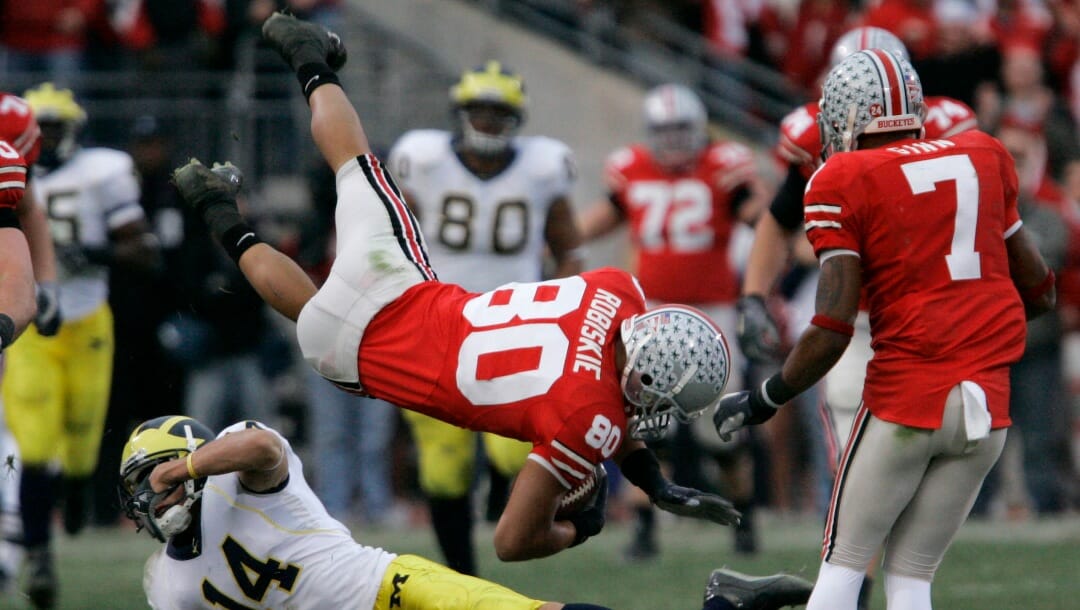 Michigan vs. Ohio State is one of the best rivalries in sports history, not just college football history.

The historic series began in 1897, and the teams have played every year since 1918, except for 2020, when the game was put on hold due to the COVID-19 pandemic. And the series will continue in November 2022 as the two programs – with the best Big Ten championship odds in college football betting – will meet for the 116th time.

Jim Harbaugh says, "Our goal is to beat Ohio State and Michigan State in the same year."

Here’s a look at one of the greatest rivalries in college football, known simply as “The Game:”

Current Streak: Michigan has won one

One of the greatest games of the 21st century is also arguably the best game in the long history between these two fierce rivals. Both sides entered this one with undefeated records as the two top-ranked teams in the country.

No. 1 ranked Ohio State prevailed with a 42-39 victory thanks to Heisman trophy winner Troy Smith’s 316 yards and four touchdowns through the air. Michigan’s Mike Hart was the Wolverines’ top performer with 142 yards and three touchdowns on the ground.

The sheer magnitude of what was at stake between these fierce rivals heading into the last game of the season makes this an unforgettable college football moment.

This meeting could also win the nomination for the best game in series history, but it fits more as the “biggest upset” due to the shocking nature of the win.

Ohio State entered this contest undefeated and ranked No. 1 in the country. Without a single blemish on their record, it appeared they would repeat after winning the 1968 National Championship.

Buckeyes head coach Woody Hayes was in for a rude awakening at the Big House, as first-year Wolverines head coach and former Hayes assistant Bo Schembechler had other plans. The Wolverines grabbed a 24-12 halftime lead, and neither team scored in the second half as Michigan cruised to victory.

Schembechler would coach another 20 successful years, compiling a 194-45-5 record with the program.

The late Dwayne Haskins put on a show in the Buckeyes’ dominant 62-39 win in 2018. Michigan entered the contest with a 10-1 record identical to Ohio State’s mark, making this a highly anticipated matchup.

The shellacking that ensued led many to believe Michigan coach Jim Harbaugh wasn’t capable of beating his rivals. Those questions would remain until Harbaugh was vindicated in 2021’s victory by a score of 42-27.

Haskins’s 2018 performance should go down in the history of all-time excellent statistical outputs in a meaningful rivalry game. The quarterback threw for 396 yards and a whopping six touchdowns while leading an incredible offensive performance.