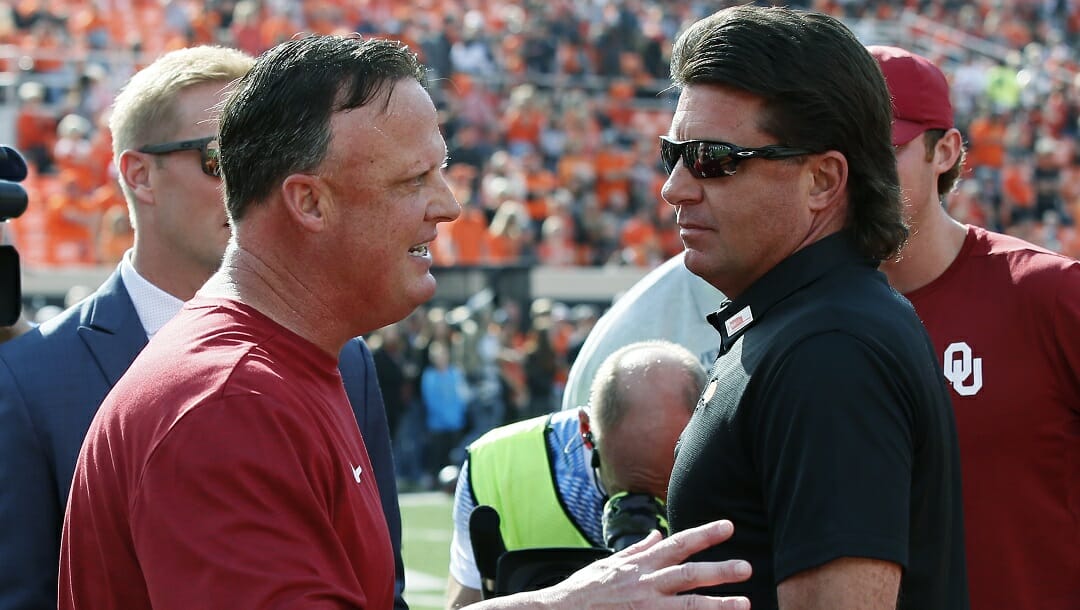 Oklahoma Sooners fans have not exactly had a pleasant offseason. The annual conference favorite in the Big 12 lost its brilliant head coach and five-star quarterback.

As a result, the annual College Football Playoff contender has dropped precipitously in the college football championship odds market.

Now, with less than a month before the college football season gets underway, we’ve got new drama in Norman.

It’s the increasingly intriguing saga of the Cale Gundy resignation.

Oklahoma is currently the betting favorite to win the Big 12 at +200.

In the broader NCAAF odds market, the Sooners are 35-to-1 to win the national championship.

Should You Bet on Oklahoma to Win the Big 12?

I would caution anyone in the online sports betting space against buying Oklahoma this year in either market. I’m not even sure I would recommend the Over 9 (-135) on their season win total.

Because I’m a West Virginia fan, I watch a lot of Big 12 football. I’m not sure average bettors – maybe even Oklahoma fans – understand the degree to which former coach Lincoln Riley elevated that program.

Former Clemson coordinator Brent Venables should be a good replacement, but I think the program will take a step back under him. It would be nearly impossible not to.

Add in the hugely significant transfer departures from this offseason, as well as a dramatic preseason resignation, and a bet on Oklahoma just isn’t much more than a bet on the name brand.

There are more valuable positions to examine in the Big 12, starting with TCU. The Horned Frogs are 14-to-1 to win the Big 12.

Cale Gundy Resignation: What We Know So Far

Cale Gundy is a former Oklahoma quarterback who has worked as an assistant coach for the Sooners in various capacities since 1999.

On Sunday night, he resigned from his position. The news shocked many Big 12 fans because of his long tenure and the proximity to the season.

Gundy’s version of events – which no one seems to dispute – is that he noticed a player unfocused during a film session, distracted by an iPad.

Looking to deploy a classic teaching method, Gundy picked up the iPad and read the screen aloud to the whole room.

“It’s with sadness that I accept Coach Gundy’s resignation. He’s dedicated more than half of his life to Oklahoma football and has served our program and university well. We’re thankful for that commitment. We also acknowledge that in stepping aside he’s placed the program and the welfare of our student-athletes first.“

“In coaching and in life, we’re all accountable for our actions and the resulting outcomes. The culture we’re building in our program is based on mutual respect. Our staff is here to develop successful student-athletes, but also young men of character. As the leaders of this program, it’s essential that we hold ourselves to the highest standards as we model for our players the type of men we want them to become. L’Damian Washington, who has been serving as an offensive analyst for our program, will coach our wide receivers on an interim basis.”

So, that’s the official version of events. Though I should probably point out that there are rumors – including a deleted tweet from Cale Gundy’s daughter – that Venables’ initial response was to try to cover the incident up.

Prior to his resignation, Oklahoma assistant coach Cale Gundy was the longest-tenured football coach in the Big 12 – even longer than his older brother. The latter has run the Oklahoma State program since 2005.