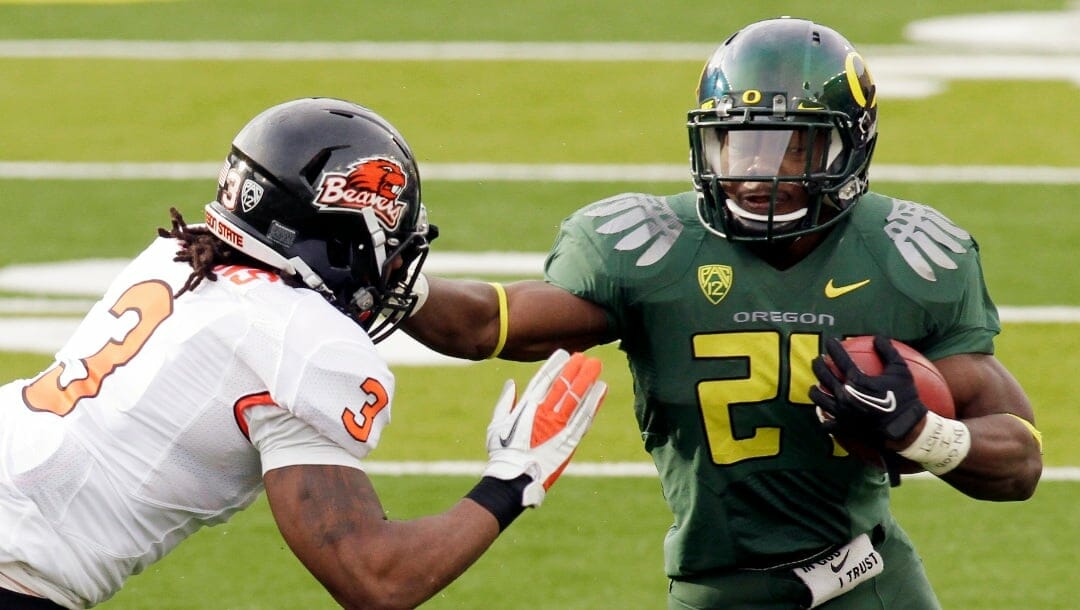 Ask anyone in the state of Oregon about how hard feelings and football intertwine, and it won’t take long until the Oregon Ducks vs. Oregon State Beavers football rivalry is mentioned. These two teams have a longstanding tradition, with the first meeting in 1894. There have been plenty of memorable moments over the years in the 125 meetings since.

Current Streak: Oregon at one game

Not only was this a momentous game due to the rivalry implications, but it also determined the winner of the PAC-10 conference that year. Both teams met with a PAC-10 championship and a Rose Bowl trip on the line, and the game did not disappoint.

The No. 13 Beavers grabbed an early 7-0 lead thanks to a one-yard Jacquizz Rodgers touchdown run, but the Ducks quickly answered with their own one-yard plunge courtesy of LaMichael James.

The back-and-forth action didn’t stop there, as the teams traded leads six more times before the evening was done. The deciding factor was a 52-yard run by James with 1:20 remaining in the third quarter to give the Ducks a 34-33 lead. They would not relinquish the lead from that point and only one score, a Ducks’ field goal, occurred in the fourth quarter.

Call it recency bias if you want, but both fan bases will remember 2020’s meeting for a long time.

The No. 9 ranked Ducks will be remembered because they held a 31-19 lead entering the fourth quarter and still managed to squander the lead to an unranked rival.

For the Beavers, it will be remembered for an epic 22-point fourth-quarter comeback headlined by a Chance Nolan one-yard touchdown run with 0:33 left on the clock to give them their first and only lead of the game.

This award should go to several Oregon running backs who spearheaded Oregon’s dominance in this series over the last 13 years. J

ames played in three games against the Beavers (all wins), racking up 442 years and six touchdowns on the ground. He wins the award as he was a critical member of the momentous 2009 win, but some other Duck running backs deserve mention.

Kenjon Barner was a part of each of those first three victories, as well as the 2012 win, and accumulated 428 yards and four scores on the ground for a robust 6.8 yards per carry. Royce Freeman was next in line, racking up 530 yards and four touchdowns from 2014 to 2017 while posting a 3-1 record in the series. Lastly. Travis Dye was 3-1 in his career against Oregon State, posting 482 yards and four scores rushing.