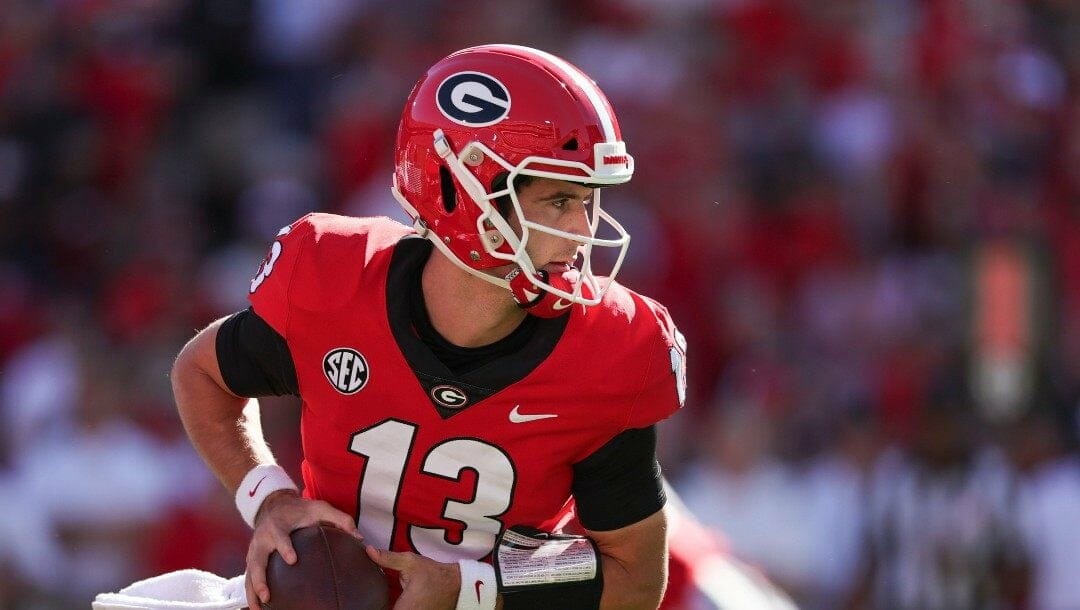 College football is back, which means teams are battling it out to see who will reach the College Football Playoff at the end of the season.

There are a number of teams with good college football championship odds, and these will change a great deal over the course of the year.

Here’s how the playoff would look if the season ended today.

The first semifinal would pit the No. 1 team in the country and the defending champions, Georgia Bulldogs, against No. 4 Texas Christian University.

Georgia was hardly dominant at Kentucky this past weekend but won 16-6, finishing unbeaten in conference play for the second straight season. That is an accomplishment in any conference, but especially in the SEC.

The positive from the Kentucky game was Georgia ran for 247 yards, good for 5.4 yards per carry. The negative is they only threw for 116 yards. That could be by design, but the Bulldogs will need more from Stetson Bennett if they are to repeat as champions.

They will close the regular season with a resurgent Georgia Tech squad that just beat North Carolina, and then they’ll play LSU in the SEC championship game on December 3. If they win out, the math is simple, and Georgia will be the first seed.

The fourth seed is a newcomer to the playoff, and they stay at No. 4 after winning a thriller in Waco over Baylor.

The Horned Frogs looked dead in the water as they trailed by eight and were missing multiple offensive stars. Max Duggan led them to a touchdown late in the fourth quarter, but they failed the two-point conversion and needed a stop. The defense was able to get Duggan the ball back.

He completed a few passes and had a pivotal scramble to get them into field goal range. Head coach Sonny Dykes opted to run the ball despite not having any timeouts, and the field goal unit scrambled on, snapping the ball with four seconds remaining.

The 40-yard field goal sailed through the uprights, and TCU’s perfect season survived. They now play Iowa State at home and Kansas State or Texas in the Big 12 championship game.

The other semifinal would feature the second-ranked Ohio State Buckeyes against archrival and third-seed Michigan Wolverines.

As amazing as a playoff matchup between the two would be, this game will not happen. The regular-season finale between these two teams is essentially a playoff play-in game. The winner is likely the second seed, and the loser will probably be just outside the College Football Playoff.

When is the 2022 College Football Playoff?

The semifinals will occur at the Fiesta Bowl and Peach Bowl on New Year’s Eve. The first contest will begin at 4:00 p.m. ET and the second game will kick off at 8:00 p.m. ET so that you can ring in the New Year with the four best teams in the country. The semifinal winners will battle for the national championship on January 9, 2023.