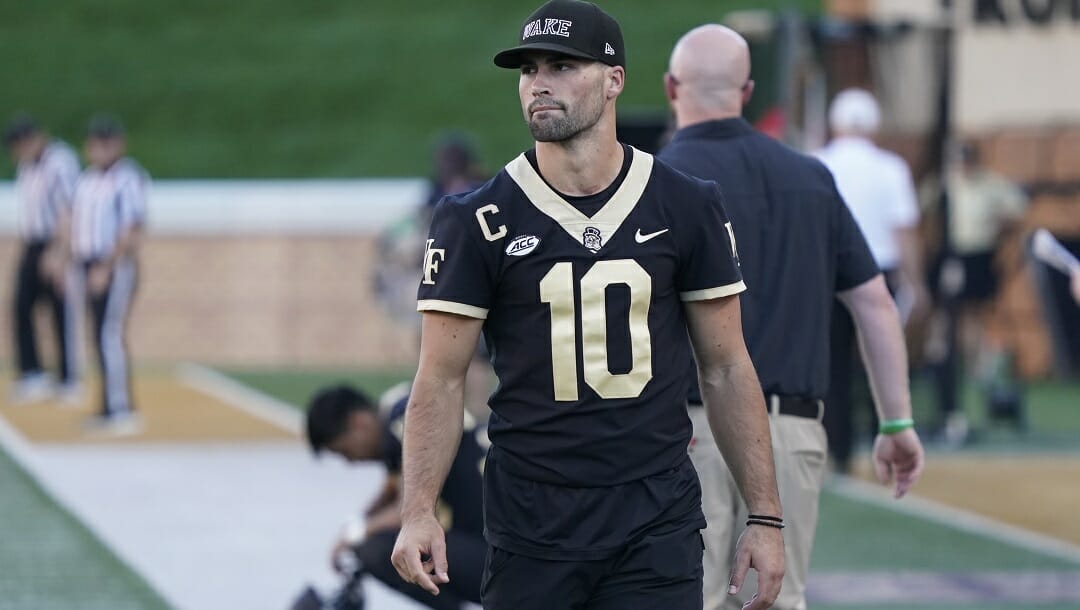 Winston-Salem was the epicenter of a major news earthquake in college football on Tuesday, as Wake Forest got its QB1 back in time for a Week 2 game against Vanderbilt.

What Happened to Sam Hartman?

Sam Hartman, a quarterback at Wake Forest since 2018, developed blood clots in his arm because of Paget-Schroetter Syndrome.

After the condition was identified in August, his doctors sidelined him from the field until the clots could be resolved.

Paget-Schroetter Syndrome is a rare variation of upper-extremity deep vein thrombosis (DVT), where blood clots can form in the deep veins of the arms.

Hartman was sidelined indefinitely on Aug. 10 for what was then a publicly unknown medical reason.

The results of those tests and subsequent treatment will remove Sam from team activities indefinitely. The timeline for his return to competition is uncertain.

In respect for Sam’s privacy and in compliance with HIPAA, no additional details will be shared at this time.”

Now, a month later, we know the issue the doctors found was a clot (or perhaps a series of clots) in his arm, caused by Paget-Schroetter Syndrome.

On Sept. 6, Wake Forest cleared him to play, releasing another statement from Hartman’s medical team:

“After our diagnosis on August 9, we first did a procedure to remove the blood clot. Secondly, we performed surgery to eliminate the pressure on the vein and then dilated the vein.

“On Friday, we did another follow-up ultrasound on Sam and everything looked great. The clot was gone, the blood flow was good and he felt great.

Blood thinner therapies were discontinued once they became medically unnecessary and he is medically cleared to return to full competition.”

Sam Hartman is currently priced at +3000 to win the Heisman at the BetMGM online sportsbook.

Given how Heisman voting is susceptible to media and narrative bias, buying a “hardship and adversity” ticket like Hartman might not be a terrible idea.

Wake Forest opened as a 6.5-point road favorite at Vanderbilt in the NCAAF odds market.

Then, Hartman was medically cleared to play on Tuesday, and everything went crazy.

As of Wednesday morning, the line is now Wake Forest -13.5, and it may continue to fall.

After an exciting Week 1 of college football, @chaseakiddy previews the Wake Forest-Vanderbilt game! 🏈

It’s important to understand the difference between being medically cleared to play and being announced as the definite Saturday starter. None of us know Hartman’s conditioning or game shape right now, three days before the team’s trip to Nashville.

I don’t really want to bet Vanderbilt in this spot, but the math tells me it’s the right move.

The Commodores have become a very sharp side; the only question now is how much more value I can get from the Wake Forest bandwagon effect.