The 10 Greatest Maryland Football Players of This Century 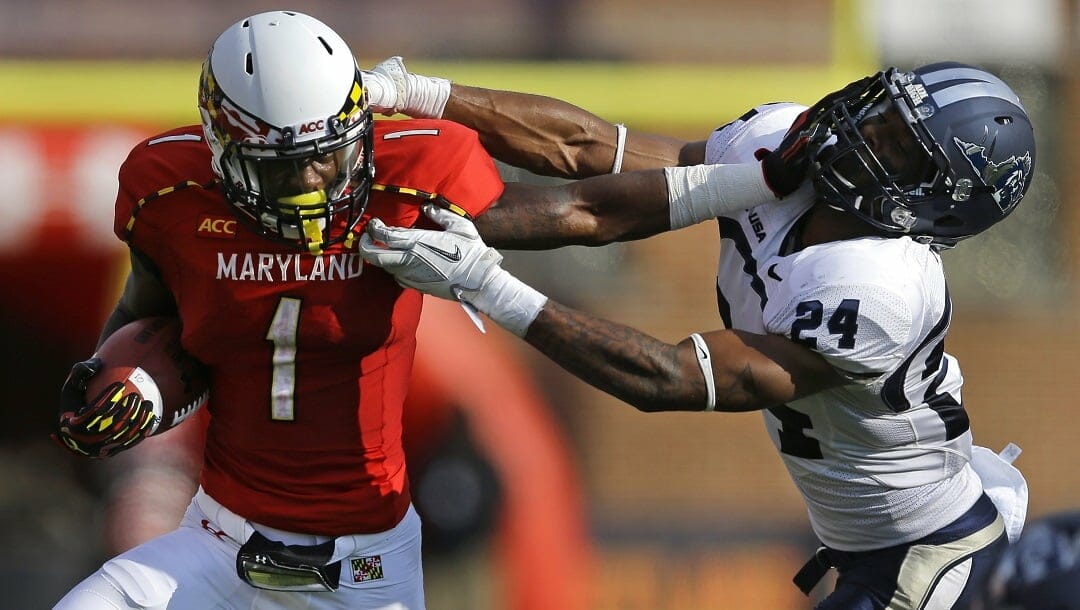 Today, The Roar is setting aside Heisman favorites and college football ATS records for one moment to jump into the way back machine.

Let’s take a look at the 10 greatest Maryland football players of the modern era – anyone who has put on a Terrapins uniform since 2000.

Ngakoue was a classic career climber on the defensive line, popping as an upperclassman after showing flashes as a freshman and sophomore. He appeared in all 13 games as a true freshman, then received All-Big Ten Honorable Mention as a sophomore in 2014.

But it was Ngakoue’s junior year that really earned him consideration for this list. He broke Bruce Palmer’s 35-year-old school record for single-season sacks by posting 13.5 QB takedowns.

It was an outstanding year that also brought first-team Big Ten accolades.

Like Ngakoue, Josh Wilson slowly built himself into one of the best defensive players in the nation. He was also one of the top athletes anywhere on the College Park campus in the mid-2000s, which explains why he also ran sprints for the UMD track team.

By the end of Wilson’s run at Maryland, he had stacked up an impressive array of accolades. He was a two-time Academic All-ACC selection, set the single-season record for return yards at Maryland and earned both All-ACC and All-American honorifics.

It can sometimes be hard for the average fan to know exactly how good individual offensive linemen are. However, CJ Brooks left little doubt, routinely erasing blockers and opening holes in the early 2000s.

Brooks started all 12 games in 2001 as a redshirt freshman, earning a Freshman All-America nod from the Sportings News. He started 37 games, earning multiple All-ACC honors while giving Maryland added flexibility with its offensive line configurations.

All kinds of stats could explain how good Shawne Merriman was at football. It’s probably easier to explain that he earned his nickname, Lights Out, after a high school game where he knocked four different players unconscious.

Merriman struggled with injuries throughout his career at Maryland, and he was limited to appearing in games situationally rather than starting and playing full games. Still, he managed 13.5 sacks across 12 starts and 27 games.

Vellano really started to come on during his redshirt sophomore year in 2010, plugging up the run lanes on Maryland’s defensive interior. He worked hard and developed into a consensus All-ACC selection and All-American DT, posting at least 60 tackles or more in each of his final three seasons at Maryland.

Following his graduation from Maryland, Vellano has had arguably the most interesting career of anyone on this list. He won a Super Bowl ring with the Patriots in the 2014 season while backing up Vince Wilfork; he now plays in Italy with the Parma Panthers.

The next season, he broke a Big Ten conference record after he returned eight punts for 233 yards in a game against FCS Richmond.

Long before he was an ESPN commentator or an NFL Draft pick, Domonique Foxworth racked up eight interceptions and more than 100 career tackles in his time at Maryland.

Vernon Davis was an elite NFL tight end and annual target for fantasy football players. He was a mainstay with the 49ers that’s likely on his way to the NFL Hall of Fame.

Before that, though, he was a standout in College Park, racking up 878 yards and six touchdowns in his 2005 season with the Terps. He earned consensus All-American status and was ultimately drafted sixth overall by San Francisco. The rest was history.

Jackson is the perfect example of a college football player who never put a ceiling on what he was capable of.

As a freshman in 2002, Jackson led all defensive freshmen contributors with 51 tackles. By his sophomore year, he had assumed command of the entire defense, leading the team with 136 tackles. (He also had 7.5 TFL’s and two picks.)

By his junior year, Jackson was the baddest man in the whole ACC. He led the conference with 123 tackles and earned multiple All-American awards. He finished his career in 2005 by earning ACC Defensive Player of the Year; the following spring, he was drafted at the beginning of the NFL Draft’s second round.

Diggs has been elite at virtually every stage of his football career. He was a five-star high school recruit that was considered the No. 1 prospect in the entire state of Maryland. He stayed home with the Terps despite a truckload of offers from other schools.

In college, Diggs posted 2,414 scrimmage yards (14 touchdowns) plus another 1,692 return yards (2 touchdowns). He entered the NFL Draft after his junior year, where he ultimately became an All-Pro wide receiver.

This season, the Bills are Super Bowl odds favorites, which means Diggs has his best-ever chance at becoming the second player on this list to grab a Super Bowl ring.

Henderson still holds three NCAA records, including for his 135 solo tackles during the 2002 season. He was ACC Defensive Player of the Year twice, and he was a consensus All-American twice. He also won the Jack Lambert Trophy in 2002 as the nation’s top linebacker.

Unsurprisingly, he was selected by the Vikings in the second round of the 2003 NFL Draft.

It’s been 20 years since he left College Park, and nobody has matched his greatness since.

Thousands of Marylanders are looking forward to the upcoming legalization of online sports betting when anyone located inside the state of Maryland will be able to access and bet with an online sportsbook.

The legal sports betting market became available in Maryland in November 2022. BetMGM is your go-to sportsbook to bet online on all your favorite players and sports throughout the year.

From college football and NFL odds, NBA live betting, and MLB playoff odds to golf odds to win the Masters, BetMGM has hundreds of wagering options for you.

Is Sports Betting Legal in Maryland?

How To Bet Online in Maryland

Marylanders can make wagers on their favorite sports using the BetMGM Sportsbook via our apps in the iOS App Store and Google Play Store, as well as on our website. Be sure to check out BetMGM’s welcome offers for new sports bettors in Maryland, including first-bet insurance valued up to $1,000 by registering here.

Now that sports betting is legal in Maryland, you may place exciting wagers that include moneylines, parlays, and straight bets on pro and college teams like the Baltimore Ravens, Washington Commanders, Baltimore Orioles, and Maryland Terrapins, as well as thousands of other squads around the world.