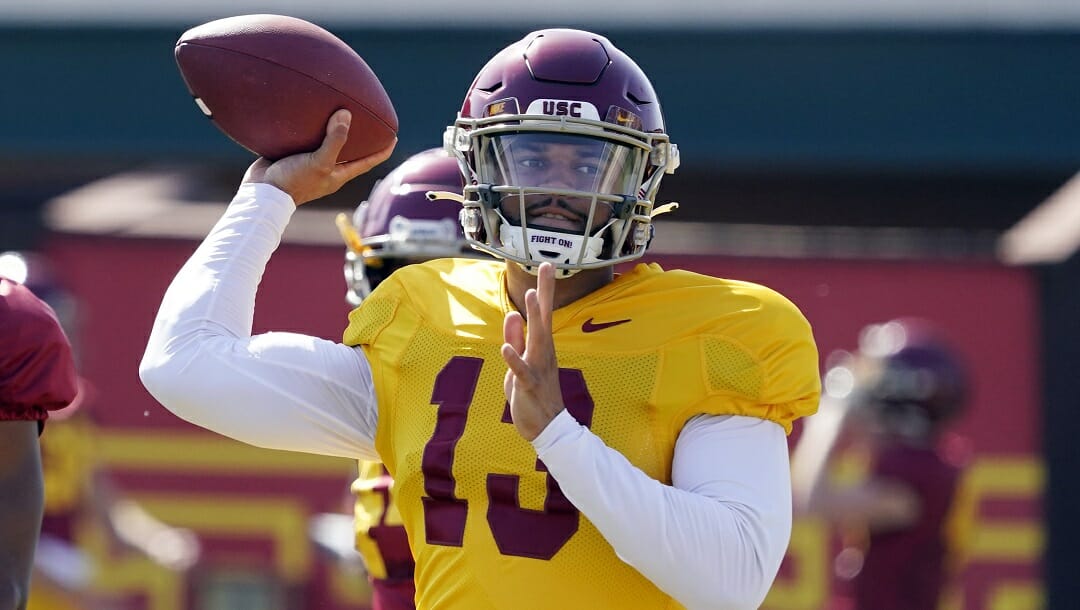 With another college football season finally here, the world of online sports betting is getting ready to lock in its futures positions.

One of the most fascinating handicaps remains out west, where the college football odds around USC have been a popular online sportsbook attraction throughout the offseason.

USC opened at +3500 in the 2022 college football national championship odds market. A sizable amount of public attention has pushed that number down to +2000.

It’s not difficult to figure out why so many bettors like USC. New head coach Lincoln Riley is an elite offensive mind – perhaps the best in college football.

Transfer acquisition Caleb Williams is the best quarterback the Trojans will have fielded in more than a decade.

We already know what Riley and Williams can do when they put their heads together, as we saw at Oklahoma last year.

Add in gobs of other high-profile talent, like former Pitt receiver Jordan Addison, and Southern Cal has extreme offensive potential in 2022.

There is one big problem with USC, though, and it has nothing to do with the on-field talent.

From a betting standpoint, the market for the Trojans is completely priced out.

Take a look at the Pac-12 odds market at BetMGM right now. USC and Utah are priced very closely together.

This is how the market sees the conference’s top two teams. They are de facto co-favorites.

Given the recent history of the Pac-12, it will take a near-flawless Pac-12 champion (or something very close) for either team to crack the College Football Playoff, let alone win the national champion. There is virtually no path to a two-bid Pac-12.

Regardless, the national championship NCAAF odds market prices USC at 20-to-1 and Utah – its only true conference peer, according to the football odds – at 50-to-1.

There is only one explanation of how these teams could be handicapped so tightly in the conference odds market yet so differently in the national championship market.

USC is perceived as a legitimate national contender thanks to a dump truck of sexy offseason additions. Plenty of bettors are buying the Trojans.

However, the Pac-12 odds tell the real story. Forget the national championship – it’s not even clear if USC can beat Utah for a conference title.

I recently invited Colby Dant onto The Lion’s Edge, which is my handicapping analysis podcast for BetMGM.

At the top of the show, I listed three obvious national title contenders (Alabama, Ohio State, Georgia) and then a trailing group of four: Clemson, Texas A&M, Michigan and USC.

I asked Dant if he would include anyone else in that group.

“I mean, I think if you’re going to throw in USC, then you have a few teams that deserve to be ahead of them,” Dant said. “I think Oklahoma Sooners. I think Utah Utes should be ahead of them… maybe you could make the case for Oregon.”

Like Utah, Oklahoma is 50-to-1 to win the national championship in Brent Venables’ first season as a head coach.

Dant – who lives in Los Angeles – is skeptical of the Trojans’ viability as a title contender. He also recommends a play on Under 9.5 wins for Southern Cal, partly because he believes that USC’s recently announced departure from the Pac-12 will translate to some tougher-than-usual road environments in conference play.

Couldn't wait until Thursday, so I dialed up @TheColbyD for a longggg conversation with tons of actionable tips and analysis.

For the full podcast episode with Dant, don’t forget to check out The Lion’s Edge podcast. It has intelligent, weekly insights into trends and betting tips across the online sports betting world. It’s available on iTunes, Spotify, or wherever you listen to podcasts.