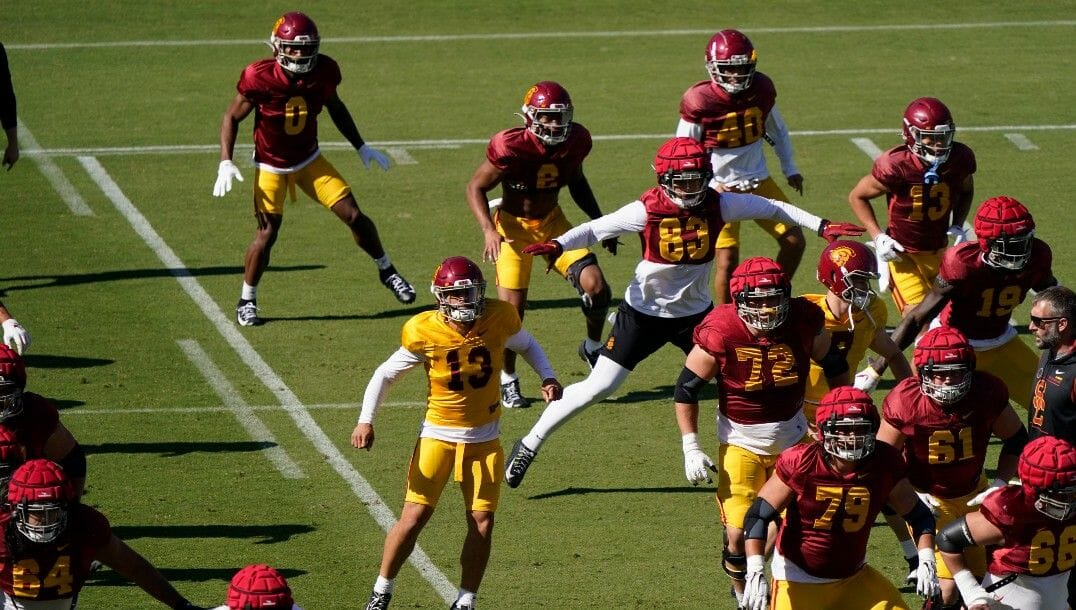 My girlfriend’s parents were visiting our house last Thursday when the news first broke.

You know, that news. USC and UCLA headed to the Big Ten. A century of tradition and college football odds shoved right out the door.

They were using a ladder to hang a new ceiling fan when I got the push notification on my phone.

“Jeff, I need to tell you something,” I said. “I’m going to need you to come down off that ladder.”

He’s a UVA alum and a big Hoos fan, so the news didn’t directly affect him. But then again, you don’t need to have been raised on hotdish and cheese curds to feel some kind of way about the Big Ten’s newest realignment wrinkle.

College football is beloved for many reasons, but one of the biggest is that it’s somehow personal, regional and national, all at the same time.

Alumni often have deeply personal connections to their universities that fertilize their love of college and college athletics.

In other cases, proud programs capture the mindset of a different region or state, becoming an avatar for the dreams of a place that might otherwise feel a bit dreary. Often, this is where college football actually thrives – not in big cities but in small towns and locales that have come to take pride in football and family above all other things.

All this is rolled into a cohesive national product with elements of class, economics, and even politics all bubbling below the surface. We understood that. Maybe we even liked it.

As someone that’s been the beneficiary of conference realignment twice in 10 years, I can hardly complain.

I was just starting my minor in sports communication in the fall of 2011 when Pitt and Syracuse announced they were joining the ACC, and the breakup of the Big East was suddenly imminent. I wondered how my favorite team, West Virginia, could survive.

The Mountaineers were a regional power in a lowly media market, apparently destined for college football irrelevance.

Then, the Big 12 came calling. I was ecstatic. It was a virtually unprecedented amount of travel for conference games, and I didn’t care one bit. I felt like I had won the lottery.

Last year, too, it felt like I had taken millions off the casino when JMU – my alma mater, a powerful Division I FCS school – beat out dozens of other colleges and won that golden Sun Belt ticket.

When realignment calls your number, it’s awesome. Even if it doesn’t quite make sense.

College sports, perhaps more than any other heavily-consumed form of sports, is about winners and losers. There are many losers and a few programs that win constantly. Feeling like a winner is rare.

But somewhere along the line, we all collectively told ourselves that college football was this wonderful, pure pursuit of athletic competition. On their way to manhood, boys are carrying the flame of fandom for 12 games at a time.

Maybe we drank enough in the tailgate lot to believe it; maybe we didn’t need to drink anything at all.

These two LA schools are not the first to leave for greener pastures. They’re not even the first schools to be added to the Big Ten, which will now be closer to a Big Twenty than an actual Big Ten.

UCLA and USC aren’t even the first high-profile duo to dive elsewhere in the last 12 months.

What they are, though, is the pair that shattered the delusion. At least for me.

Even Texas and Oklahoma could kind of be rationalized away. “Sure, they’re breaking tradition, but the SEC has always been much more stable than the Big 12.” There have been rumors of their departure swirling for years.

West Virginia, a decade ago? That was a similarly nonsensical move, as far as geography is concerned, but that was just desperation. Any port in a storm, as they say. Even Lubbock.

As the American prophet Dutch van der Linde once foretold: “It’s man so in love with greed that he has forgotten himself, and found only appetites.” Perhaps he thought the gang should stop watching the annual Harvard-Yale game.

In 1952, the NCAA sold exclusive broadcast rights to NBC for one game a week. The contract was worth $1.1 million. Since then, we’ve been on a slow descent toward this moment, with the increasing value of live rights just quickening the speed of the fall.

College football is about money. It’s not about your love for your team.

Maybe it never was.