What Are Alabama’s National Championship Odds? 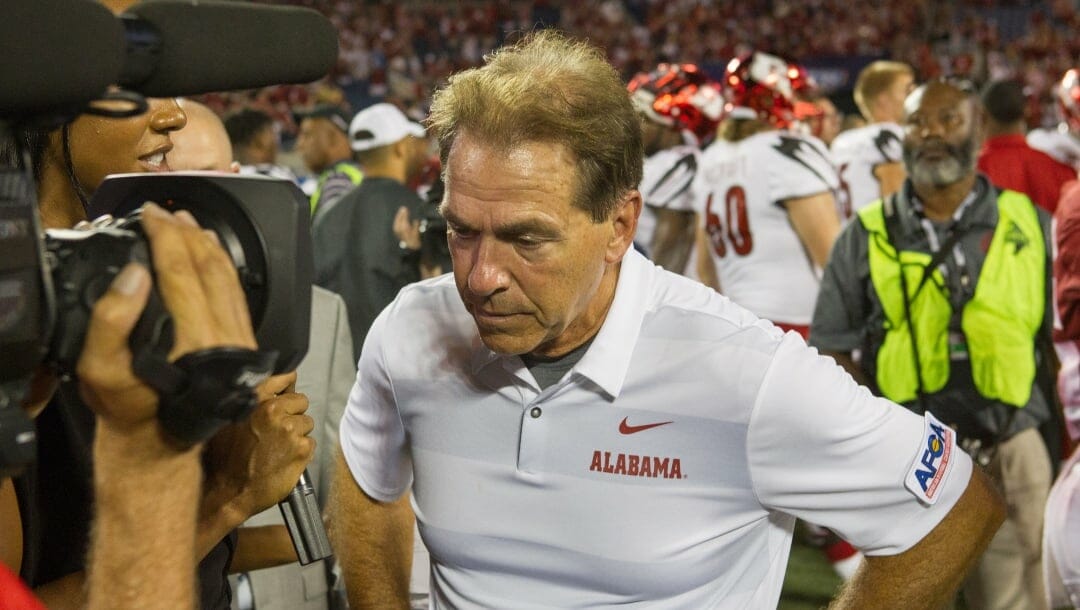 The Alabama Crimson Tide, who are one of the most popular teams in college football betting, have an easily recognizable and definable goal to begin every season. It’s championship or bust.

You know it’s a program with the highest of standards when a 13-2 season, SEC Championship, and College Football Playoff Championship appearance is described as a “rebuilding year.” As crazy as it seems, that’s where the Tide are heading into the 2022 season. Nick Saban’s squad returns Heisman Trophy winner Bryce Young at quarterback and brings in a litany of high-impact transfers via the portal. Will it be enough to rectify last year’s near miss?

Here’s a look at Alabama’s odds this season:

The Crimson Tide are the favorite to win the championship for the 2022 college football season. Saban’s squad has captured six titles since the 2009 campaign but has won “only” one since 2018.

The Ohio State Buckeyes and Georgia Bulldogs maintain the second-shortest odds, as both are +350 to win it all.

Alabama is favored to repeat as SEC Champions in 2022.

The Tide are narrowly ahead of the Georgia Bulldogs (+150), while the Texas A&M Aggies (+1600) are the only other team with better than +5000 odds. Alabama has won seven conference championships since the 2014 season, and the betting market expects that tally to increase.

It doesn’t hurt that the Tide host the Aggies and avoid the Dawgs until the SEC Championship.

This regular-season win total comes down to whether or not Alabama has an undefeated regular season.

The Tide would need to win all 12 games on the schedule to cash the Over. The Under 11.5 is listed at -135, so the betting market is anticipating that the Tide will likely slip up at some point this season.

There isn’t a definable loss on the schedule as they’ll be heavily favored in every game, so any defeat would need to be a significant upset.

Alabama’s schedule isn’t as difficult as some others in the SEC.

They have to travel to Austin to face the Texas Longhorns in Week 2, which will be a more challenging test than Texas’s 5-7 record from a year ago might indicate. All the other non-conference games should see the Tide favored by at least five scores. They get Texas A&M at home in a revenge game on Oct. 8, and their most challenging road tests will come against the Arkansas Razorbacks and Ole Miss Rebels.

They also play the LSU Tigers in Baton Rouge, and both teams will be coming off a bye week.

According to ESPN’s Bill Connelly, the Crimson Tide rank 50th in returning production. They return 12 starters, with five on offense and seven on defense. That makes the offensive side of the ball interesting, where transfers like Jahmyr Gibbs at running back and Jermaine Burton and Tyler Harrell at wide receivers are expected to have high-impact roles.

The receiving room vacates over 3,100 yards from its top three options, while the offensive line must replace both tackles.

Otherwise, this is a solid amount of returning production for a program that sends so many players to the NFL every year. It’s easy to see why Saban’s squad has such high expectations heading into 2022.