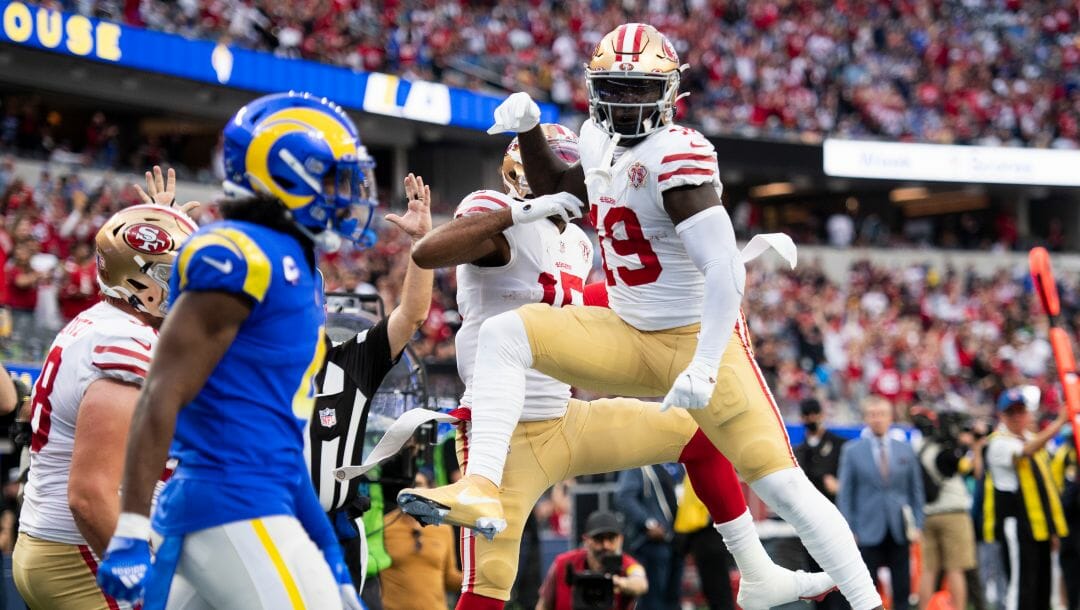 Under pressure from one of the formidable pass rushers of his generation, Deebo Samuel was unfazed.

The San Francisco 49ers, whose Super Bowl odds are +450, were seeking to tie the game up late in the third quarter against the Los Angeles Rams in their regular-season finale. Samuel took a handoff from Jimmy Garoppolo in the shotgun, darted right and looked downfield.

Immediately, the Rams’ Von Miller was barreling toward Samuel. The 49ers wide receiver jumped and threw before being clobbered by Miller. The pass, a perfect spiral that landed in the hands of a wide-open Jauan Jennings, was an equalizer as the 49ers went on to defeat their NFC West foe.

Samuel has presented himself as an equalizer against any defense. His versatile skill set, fittingly utilized by some of the most intelligent coaches in the game, have been pivotal for his team’s postseason run.

The 49ers topped the Rams twice in the regular season and are tasked with doing so again. San Francisco’s NFL playoff odds are +3.5 in Sunday’s NFC Championship in Los Angeles. Samuel’s Super Bowl MVP odds are +2000, and his NFL odds to score a touchdown this weekend are -105.

That’s in part because of his rushing and receiving prowess.

“It’s just the mindset of this team and the physicality we’ve got to play with,” Samuel said.

Samuel is a dynamic threat as a wideout alone. He was named first-team All-Pro, ahead of the likes of Justin Jefferson of the Minnesota Vikings and Ja’Marr Chase of the Cincinnati Bengals.

“I think Deebo right now is playing like one of the best players in the NFL. So just to be able to do what he is doing, he’s obviously talented, but the will that he has, it’s unbelievable,” 49ers head coach Kyle Shanahan said. “He’s aggressive in everything he does, but yet he’s not out of control in anything, because that’s who he is.

But as the season progressed, especially as the 49ers dealt with myriad injuries at running back, Samuel took on more rushing work. He didn’t receive more than two carries until Week 10 in San Francisco’s first win against the Rams. Now, among players who have received at least 20% of the most carries in the league, Samuel is rated seventh by PFF for rushing.

“How could we go the course of a game and just not get him the ball?” 49ers offensive coordinator Mike McDaniel said. “But really out of necessity, we found different ways to get him the ball. And to his credit, he’s really owning a lot of positions right now.”

Against the Rams in Week 18, the 49ers didn’t score a touchdown until the third quarter. On third and 2 on the Rams’ 16, Samuel lined up in the backfield and received a handoff. His team opened up a lane for him to earn the first down, but three defenders were in his vicinity at that point.

It didn’t matter. Samuel outran all of them and dove for the pylon.

Samuel is one of the most elusive players in the NFL. His first two years after being drafted in 2019 out of South Carolina, he was first among wide receivers with 36 forced missed tackles.

He has 26 on rushes and 24 on receptions alone this season. He’s first in the league with 10.4 yards after catch per reception among NFL players with at least 20% of the most targets.

Concocting ways to give Samuel the ball in space, McDaniel said, required a more abstract mindset.

“The game moves slow for him, and he’s fearless and he’s fast and he is big and he is hard to tackle,” McDaniel said. “The evolution of how we use him, that’s a product of two things. Him being a really good football player and I think Kyle does an outstanding job of really pushing his staff to open their mind and see what’s there maybe that we haven’t done or really think through the whys of everything that we do.”

Though he’s a receiver, Samuel is a physical runner. Midway through the third quarter in his latest outing against the Rams, the 6-foot, 215-pounder bounced off of multiple tackles en route to a tough 8-yard gain.

Shanahan said the more he’s hit, the more of a sacrifice his role is. But that doesn’t eliminate his desire to give Samuel the ball on almost every play.

“The more handoffs we give him, the more passes he catches, he’s going to take some hits, but Deebo’s handled it well,” Shanahan said. “He’s one of the main reasons we’re here, and I think it’s one of the things that’s given him the opportunity to be one of the best players in the NFL. So the more you do that, the more risks there is, but I think our team and Deebo are very happy with how far he’s taken us.”