DeMar DeRozan Producing at Historic Pace for the Bulls 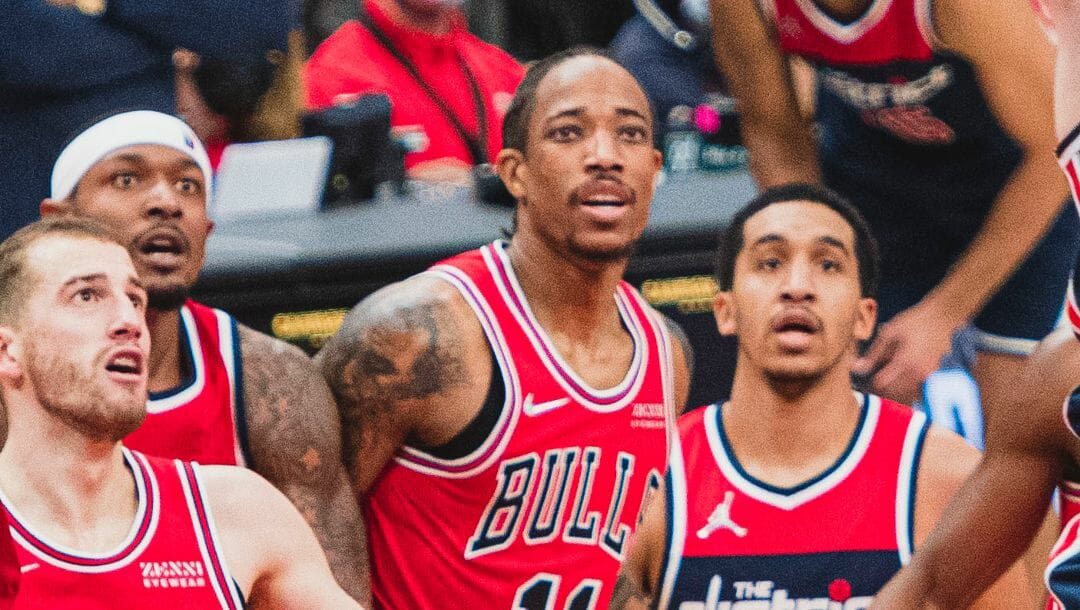 The Bulls forward, who has NBA odds of +2200 to win MVP, dribbled at the top of the key. With a three-point lead against Sacramento and less than four minutes to play, DeRozan was looking to capitalize on the moment before the All-Star break last week.

He moved forward slowly, then rapidly. He barreled down to the block, faked to his left, then spun and faded away as he took a baseline shot with Kings forward Harrison Barnes in his face.

The turnaround jumper fell. A foul was called. Chicago’s lead was extended, and eventually, led to a win.

Tallying 38 points on a 59.3% shooting clip, DeRozan became the first NBA player to tally 35 or more points while hitting at least 50% of his shots in seven straight outings. That broke a record set by Wilt Chamberlain, who had two such streaks that lasted six games.

DeRozan is thriving at an exceptional rate, helping the Bulls win their last five games. They have the ninth-best NBA championship odds at +2500 and sixth-best NBA betting odds to win their conference at +1400.

The 32-year-old was asked to describe the tear he’s on following the victory over the Kings. He said he couldn’t.

“Just to be in the record books, along with staples in basketball history, speechless,” he told media after the game. “Being in the league as long as I’ve been in the league continues to make me more humble in being an NBA player and being able to have this privilege this long and to have these opportunities, it’s something I never take for granted.”

DeRozan arrived in Chicago this offseason via a sign-and-trade with the Spurs. That was following three seasons in San Antonio and nine with the Toronto Raptors.

The decision by the Bulls has proven to be critical. In their last seven games, they were without guards Alex Caruso and Lonzo Ball due to injuries. And in four of those contests, they were also missing All-Star Zach LaVine.

Yet Chicago was 5-2 during that stretch with DeRozan leading the way. The Bulls are tied with the Miami Heat for first place in the East at 38-21.

LaVine and Ball are among the top fast-break scorers in the league. Their absence forced the Bulls to operate differently.

DeRozan has manufactured his points by other means. While he’s 12th among NBA players who log at least 10 minutes a game in usage percentage, he’s scored 33.5% of his points on mid-range shots. That’s second in the league among those who have played at least five games.

DeRozan is averaging 28.1 points per game with a 114.2 offensive rating and a 15.6 player impact estimate, all career highs, with a true shooting percentage of 60.1, just 0.2 away from his best.

“It’s one of those things I’m just completely locked in as soon as I come to work, understanding I want to be able to leave work with a win by any means necessary,” he said.

Late against Sacramento, the Kings dedicated more defensive attention to DeRozan. When he could score, he still did. But he routinely made sound decisions no matter what the Kings’ strategy was.

Donovan noted DeRozan was “really, really incredible” considering he’s succeeding at this rate without some of Chicago’s most talented players.

“I can’t speak enough of what he does for the group, and people see the numbers at the end of games, but it’s in the huddles, it’s at halftime, it’s in practice, it’s keeping his composure, talking to the guys,” Donovan said. “There’s just so many things he does from a leadership perspective that really impact winning.

“And you can see why for most of his career he’s been on a lot of really good teams and a lot of winning teams. He’s learned a lot from it, but I also think it’s really important to him. Winning is important to him.

“And when you’re consumed with winning, you understand there’s a lot that goes into that besides what takes place in between the lines, what takes place with your personal stat line. You impact a game, and I’ve always felt like great players make people around them better. And I think the best compliment I can give him is he’s a great player because he makes every one of our guys better around him. It speaks to his greatness that he can lift up a group of guys like that.”

Following the win over the Kings, DeRozan — somehow — felt he should’ve sunk more shots than he did. He believed it wasn’t up to his standard.

But, he added, if the Bulls are to be among the best teams in the NBA, they need to constantly take on daunting challenges. For DeRozan, that’s meant performing at a historic rate and still expecting more.

DeMar DeRozan earns Eastern Conference Player of the Week for Week 17 by leading the @chicagobulls to a 3-1 record while putting up 36.8 PPG, 5.5 RPG and 4.8 APG! pic.twitter.com/DNagJoC4Fg

Before the trade deadline, the Bulls didn’t make drastic moves. Executive vice president of basketball operations Artūras Karnišovas said that was because the team is capable of winning as is.

“This group has shown we can compete in the Eastern Conference,” Karnišovas said.

DeRozan has made sure of it.