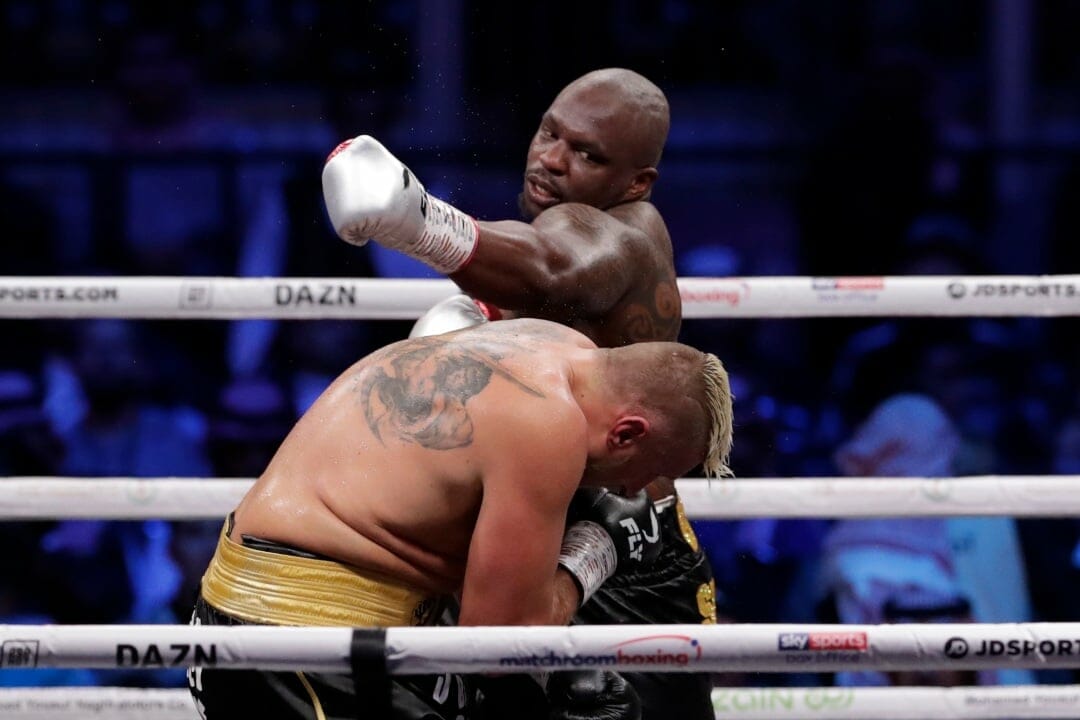 The biggest fight in Dillian Whyte’s professional boxing career will go down this Saturday. He’ll try to defy the boxing odds by challenging the reigning WBC World Heavyweight Champion, Tyson Fury, in front of the sold-out Wembley Stadium. He earned this opportunity by avenging his loss to Alexander Povetkin, and TKO’ed him in the fourth round of their March 2021 showdown.

Although Whyte is the underdog (+400 as of April 21) in the boxing betting odds this weekend, there is no denying that his boxing record is quite impressive.

Dillian Whyte’s next fight is against against Tyson Fury on Saturday, April 23 at Wembley Stadium in Wembley, London.

Before being a local of Brixton, London, Dillian Whyte was born in Jamaica. He was a former professional kickboxer who had a record of 20 wins and one defeat, thus becoming a national kickboxing champion in England.

Shortly after giving up his promising kickboxing career, Whyte competed in one professional MMA fight, which he won via a 12-second, first-round knockout.

His MMA stint only lasted for that spectacular win before formally jumping into the boxing scene in 2009, where he notably beat Anthony Joshua in his first amateur match. Whyte officially turned pro in 2011.

Dillian Whyte’s pro boxing debut occurred in May 2011 when he fought Tayar Mehmed in a four-round match and won via points. Since that impressive maiden win, Whyte went on to collect 14 consecutive wins with 12 finishes in four years to rightfully claim his title shot against Brian Minto.

The ”Body Snatcher” proved that he should be part of boxing’s heavyweight top class after stopping Minto in the third round to become the WBC International Silver Heavyweight Champion. This championship run by Whyte was short-lived because three months later, Anthony Joshua got to avenge his amateur loss from him.

Six years after their first meeting in the amateur ranks, Joshua and Whyte crossed paths once more in December 2015, but now in the professional setting, where Joshua gifted his former tormentor with a 7th round TKO loss, thus snatching the WBC International Silver Heavyweight Title, Commonwealth Heavyweight Title and the vacant British Heavyweight Title from Whyte.

That loss to Anthony Joshua didn’t deter Whyte from making another run at the top of the weight class. He plunged himself into 11 consecutive wins, making him an undefeated fighter for over three years while winning back the titles he once held before.

The British heavyweight star ran into another loss in August 2020 when he was pitted against Russian knockout artist Alexander Povetkin in their high-profile fight. In the fifth round of their encounter, Povetkin knocked Whyte out cold to grab the vacant WBC Diamond Heavyweight Title and WBC Interim World Heavyweight Title.

But seven months later, Whyte was handed an immediate rematch. He avenged his loss with a spectacular stoppage of Povetkin in the fifth round to get one back from him and reclaim the WBC Interim World Title, which made him the mandatory challenger to Tyson Fury.

Speaking of the fight with Tyson Fury, it will be the biggest match in Dillian Whyte’s fighting career, a chance to beat the top boxer in today’s era. However, several fans dismissing his chances of winning because of his five-inch height and a seven-inch reach disadvantage and how unpredictable Fury fights.

However, don’t disregard the boxing skills and arsenal of Whyte, as he can counter-punch and put anyone to sleep with his powerful left hook, which was an essential recipe for his 63% career finishing rate.

If Whyte can find a home with the patented left hook, then it will be a massive upset and another win across his name. This will be a perfect way to throw his name at the top of boxing’s elite champions if and only if he connects with that deadly shot.