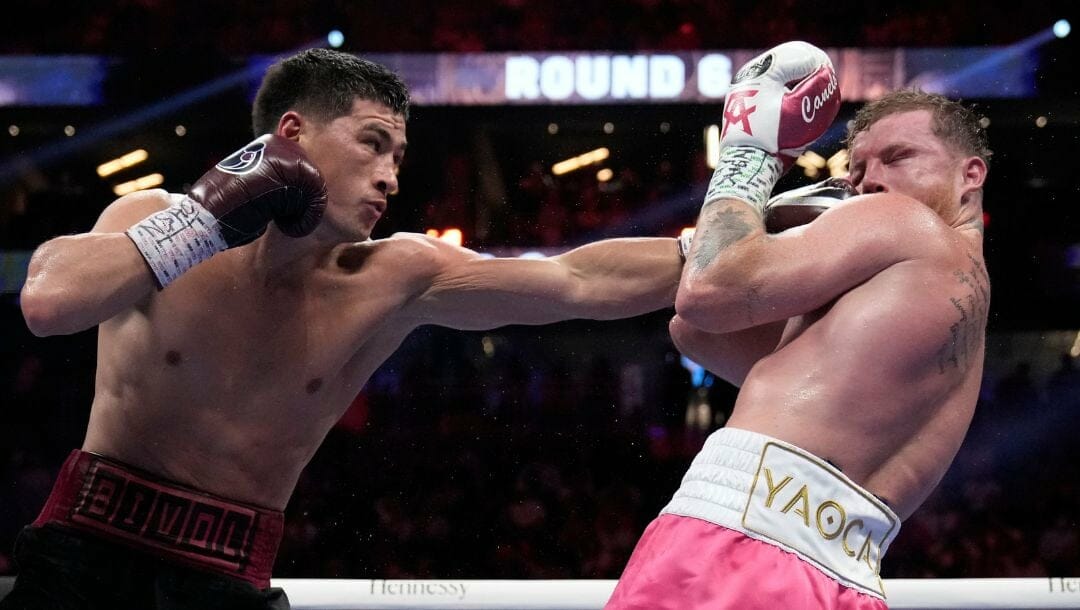 The ninth title defense of reigning WBA Super World Light Heavyweight Champion Dmitry Bivol (20-0) will happen this November 5, inside the Etihad Arena in Abu Dhabi, as he will try and fend off the challenge from Gilberto Ramirez (44-0). Bivol is the favorite in the boxing odds at -400 against the betting underdog Ramirez who is at +300.

This huge difference in the odds is mainly thanks to Bivol’s massive upset win over Canelo Alvarez in May 2022, where he scored a unanimous decision victory to stain Canelo Alvarez’s record and give him his second career defeat. The win also boosted Bivol’s name to stardom.

After a successful amateur career where he won over 250 fights, only lost 15, and multiple medals from various tournaments, Dmitry Bivol officially turned professional in October 2014 and beat Jorge Rodriguez Olivera via sixth-round TKO. Two fights later, he won his first minor title after knocking out Felipe Romero in the eighth round of their WBC Silver Light Heavyweight showdown in August 2015.

Before Bivol could defend his title, the WBA upgraded his status as the regular champion. From then on, he became an unstoppable title holder, beginning with his title defenses against Trent Broadhurst (first-round knockout in November 2017) and Sullivan Barrera (12th-round TKO in March 2018). The now-California native also scored victories over Isaac Chilemba (unanimous decision in August 2018) and Jean Pascal (unanimous decision in November 2018).

This streak has allowed Bivol to set up a high-profile bout against Joe Smith Jr. in March 2019, where he outpointed him en route to another decision victory. Three more successive defenses against Gilbert Castillo (in October 2019), Craig Richards (in May 2021), and Umar Salamov (in December 2021) secured a gigantic showdown with Canelo Alvarez in May 2022. Bivol maximized this career-defining fight with the Mexican superstar.

Coming in as the big underdog against one of the top pound-for-pound fighters in the world, Dmitry Bivol employed his fight plan to orchestrate the massive decision upset victory over Alvarez not only to retain his WBA Super World Light Heavyweight Championship but also burst into boxing superstardom.

Gilberto Ramirez began his professional boxing career in 2013 when he knocked out Juan De Angel in his debut. Three fights later, he captured two minor titles, the NABF Super Middleweight Title and the WBO NABO Super Middleweight Titles, at the expense of Giovanni Lorenzo, whom he defeated via fifth-round knockout. The Mexican was able to defend these two titles three times.

He fended off the challenges from Fulgencio Zuniga (in November 2014), Derek Edwards (in June 2015) and Gevorg Khatchikian (in November 2015). These wins became Ramirez’s jumping board to challenge the WBO World Super Middleweight Champion Arthur Abraham in April 2016. He outpointed Abraham via a unanimous decision to collect his first major title. The 31-year-old scored five successive wins to keep his championship belt.

The Mexican star started his 175-pound campaign with a fourth-round corner stoppage over Tommy Karpency in April 2019. He followed it up with a tenth-round TKO victory against Alfonso Lopez in December 2020 to win the NABF Light Heavyweight Title. Rodriguez scored three more stoppages against Sullivan Barrera (fourth-round knockout in July 2021), Yunieski Gonzalez (tenth-round TKO in December 2021) and Dominic Boesel (fourth-round knockout in May 2022).

This unbeaten run in the light heavyweight division opened a golden opportunity for Gilberto Ramirez to win his second title in another division against Dmitry Bivol and to score a big rout against the WBA champion. He aims to add the Kyrgyz superstar to his victim list and notch his 45th career win at his expense.

Dmitry Bivol vs. Gilberto Ramirez: Tale of the Tape and Fight Analysis

Coming into the match, the challenger will have the advantage size-wise because Ramirez is two-inch taller (6-foot-2 compared to Bivol, who stands at 6-foot-0) and has a three-and-a-half reach advantage over the champion Bivol. Additionally, Ramirez loves to bulk up on fight night which makes him weigh more than 200 pounds. Though both fighters are 31 years old, the Mexican has more professional bouts with 44 fights, while Bivol only has 20.

Stylistically, this should be a perfect fight for Dmitry Bivol because he can fully utilize his jabs, combinations and speed against Gilberto Ramirez, a flat-footed and slow boxer. Additionally, the pressure and volume of punches he will throw over the challenger will overcome him, much like what he did to Canelo Alvarez when they fought in May. Bivol is also fighting at his natural weight, where he competed throughout his professional career.

Despite having more victories under his name, Ramirez didn’t have any significant or big-time opponents to boast with. This will be the first time he will face top-tier opposition in his career. The only key for the “Zurdo” to win this title showdown is if he can push and pressure the champion on the ropes and make this an ugly match on the pocket, thus landing his unorthodox but powerful punches.

Oddsmakers have put Dmitry Bivol as the heavy favorite in this match against Gilberto Ramirez, and deservingly so because I think the defending champion will cruise past the challenger and outpoint him on the judges’ scorecards on the way to a decision win. This victory over Ramirez could also set Bivol in a potential rematch with Canelo Alvarez in 2023.