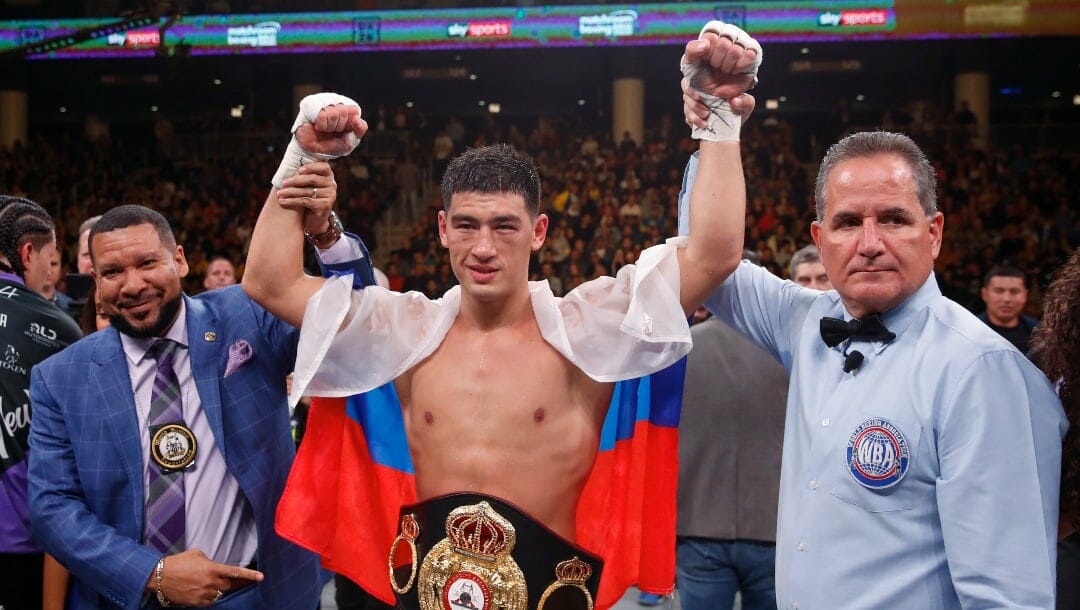 Undefeated super light heavyweight champion Dmitry Bivol will be defending his WBA title for the eighth time in his reign against Canelo Alvarez this Saturday, May 7, at the T-Mobile Arena in Las Vegas, Nevada.

Alvarez’s popularity and credentials might be the huge factor in Bivol playing the underdog in the eyes of the online boxing betting community, but don’t look past his fairly formidable achievements. Here’s an overview of them.

Dmitry Bivol’s next fight is against Canelo Alvarez on Saturday, May 7, inside the T-Mobile Arena in Las Vegas, Nevada.

Born in Tokmak, Kyrgyzstan, Dmitry Bivol began practicing boxing at six years old. At 11 years old, he started to carve his name in the amateur circuit. Bivol competed in various tournaments, including the World Cadet Championships and European Championships.

He amassed a total amateur record of 268 wins against 15 losses, becoming a two-time World Cadet gold medalist and a World Youth Champion.

After a successful stint in the amateur class, he made the jump to the paid ranks in November 2014 and fully committed to being a professional fighter.

Bivol could not ask for a better pro start as he dismantled Jorge Rodriguez Olivera in his first career test via a sixth-round stoppage in November 2014. Two more impressive victories over Konstantin Piternov (third-round TKO) and Joey Vegas (fourth-round KO) set him up for his first crack at a title.

Felipe Romero was his opponent when he picked up the vacant WBC United States USNBC Silver Light Heavyweight Title in August 2018 after he TKO’ed Romero in the very last round of the bout.

The title-clinching win opened more opportunities for Bivol as he fought Jackson Dos Santos in his next match to claim the WBA Inter-Continental Light Heavyweight Title via a fourth-round TKO win over the Brazilian.

The Kyrgyz champion, who is of Moldovan and Korean descent, scored another win over Cleiton Conceicao in February 2016 before setting up the WBA Interim World Light Heavyweight Title showdown with Felix Valera three months later. Bivol masterfully beat Valera on points to secure the dominant win.

The champion defended the interim title twice in 2017 over Samuel Clarkson and Cedric Agnew, both of which were fourth-round TKO finishes.

That interim status for the WBA title was eventually upgraded to a regular championship during the same year, just before he fought Trent Broadhurst in November. Bivol delivered his best result against Broadhurst as he knocked him out in one round to make his first formal defense of the belt.

Bivol will look to secure his eighth title defense when he steps in the ring this Saturday against Canelo Alvarez for the biggest fight of his career. The defending champion will be using his two-inch reach advantage and his slight height advantage of four inches to fend off the challenge from his opponent.

He is looking forward to throwing his favorite combination of a one-two, which earned him a 58 percent stoppage victories while avoiding the counterpunches from the also hard-hitting Alvarez, who has a 65% finishing rate.

Also, Bivol is expected to come forward and put on the pressure on his smaller opponent, something that Sergey Kovalev, Canelo’s first foe in the 175-pound division, failed to do in their 2019 meeting as he was knocked out in the 11th round.

Where to Watch Dmitry Bivol’s fight

You can watch Dmitry Bivol’s fight when you subscribe to DAZN and sign up here. DAZN subscribers can stream the fight on multiple devices, including mobile devices, TVs, and gaming consoles.