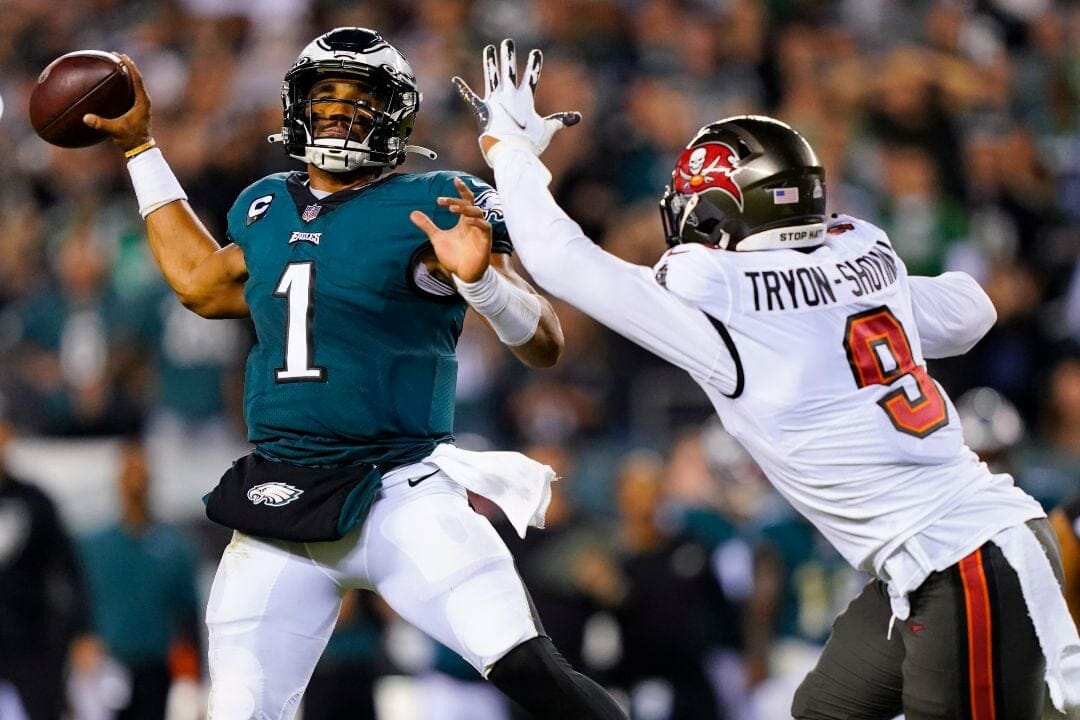 The NFL playoffs are here, and one of the wild card games for fans and bettors to enjoy is between the Philadelphia Eagles and the Tampa Bay Buccaneers.

Will they cover the spread? What are the best bets in this Eagles at Buccaneers game?

Here are some of my predictions.

Before we dive into specific predictions, here is some basic game information that you should know.

I don’t believe the Eagles will win this game outright, but I expect this team to keep the game close. The last time these two met up on Thursday Night Football back in Week 6, the Eagles only lost by six points on the road.

Philadelphia only gives up about two more points (22.6) per game than Tampa Bay and scores only four fewer points per game (26.1).

Turnovers will play a significant role in this game. The Bucs are much better than the Eagles in turnover margin with +10 vs. 0.

The Eagles are 6-3 when they win the turnover battle. I like their chances to cover this spread if they can take care of the football and control the clock with their running game.

I think Philadelphia will try to establish their running game more this time and eat up the clock. The Eagles are second in the league in rushing attempts per game (32.4). If they successfully do this, Tampa QB Tom Brady will have less time to operate.

Despite giving up 51 points to the Dallas Cowboys in Week 18, the Eagles’ defense played well before this, only allowing 15.25 in their four previous games.

Tampa Bay has a pretty respectable defense in their own right, allowing the fifth-fewest points per game in the NFL (20.8).

On top of this, the Bucs’ offense is a little short-staffed with RB Giovani Bernard and WR Chris Godwin on IR. The Bucs also cut star WR Antonio Brown.

Though RB Leonard Fournette will play, he hasn’t seen game action in over a month due to injuring his hamstring in Week 15.

Both teams have a strong defense, and if Philly can keep the ball away from the Tampa Bay offense, this game has a good chance of going under the total.

These are some of my predictions for the spread and total of the Eagles at Buccaneers game. Do you agree with these picks, or would you go in another direction?

Create an account on BetMGM today and receive a risk-free initial bet worth up to $1,000. Eagles fans in Pennsylvania can use our Pennsylvania sports betting site to get started.