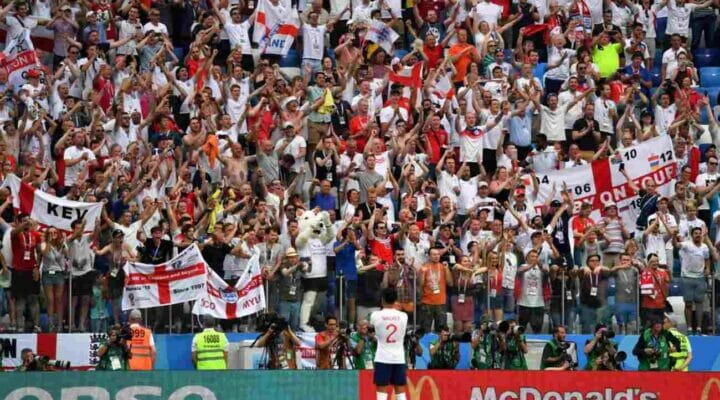 One of the host nations, England, their bitter rivals Scotland, 2018 World Cup finalists Croatia, and Czech Republic are the teams that make up Group D in the UEFA EURO 2020. Which two teams are the most likely to progress into the UEFA EURO 2020 knockout phase, and is there a chance that any will make it to the EURO 2020 final?

Read on to inform your predictions with BetMGM’s EURO 2020 odds: 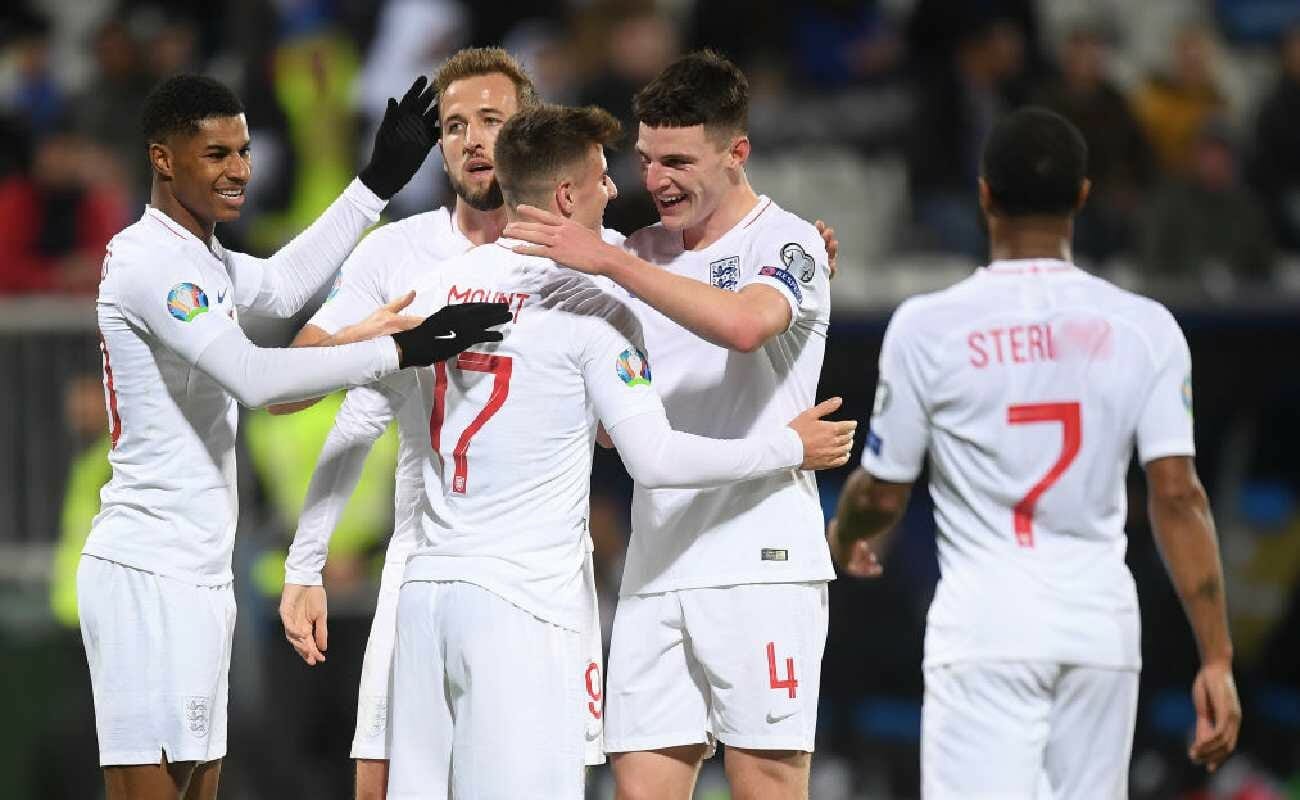 Could this be the year that The Three Lions finally break their cup curse and win silverware for the first time since 1996? The 2018 World Cup run gave us a glimpse of the talent that England have in their squad, although they stumbled shy of the mark when Croatia knocked them out in the semi-finals.

Much has changed since then and Gareth Southgate has unearthed a burgeoning number of young, talented players that could take England all the way this year. In fact, talent is the least of Southgate’s problems – it’s finding the best system to fit them into that seems to baffle the England manager the most.

He’s played around with a 3-4-3 and 4-3-3 formations, most recently in the Nations League and World Cup qualifiers, with a mixed bag of success. The 3-4-3 system was picked apart with far too much ease in The Three Lions’ defeats against Belgium and Denmark. These potential system issues aren’t the only difficulties that this side has, however, and they’ve often struggled to get the ball through the midfield.

Henderson has always been solid at the base of midfield, but creativity and dynamism often fall short when trying to get the ball up to the strikers. Hopefully, the recent call-up of Jack Grealish, and the incredible form of Mason Mount will help put these issues to bed.

Luckily for Southgate, all of England’s three group games will be played at Wembley and the semi-finals and finals should be too – if all goes according to plan – and this could help the team with the motivation that they sometimes seem to lack.

On paper, England should top this group, but they’ve struggled in big tournaments in the past. It’s not an easy group, either, and it’s not going to be a comfortable route to the top by any stretch, but if this young team really clicks there should be no stopping them.

So much is the depth of talent within this squad that picking just a few players is incredibly hard. The likes of Jadon Sancho, Jack Grealish, Mason Mount, Marcus Rashfor, Phil Foden, and Raheem Sterling are going to be tantamount to England’s success, however, it’s going to be two more experienced players that will make the biggest difference.

Jordan Henderson brings a winning mentality to this squad. He is tenacious, he leads by example, and his experience and leadership qualities are going to be integral in steering this young team in the right direction.

Of course, England’s biggest goal threat comes in the form of Harry Kane, who has just won the Golden Boot in the Premier League. If he manages to focus despite the transfer talk that surrounds him at the moment, there’s a good chance he could be up for the same award in Euro 2020. 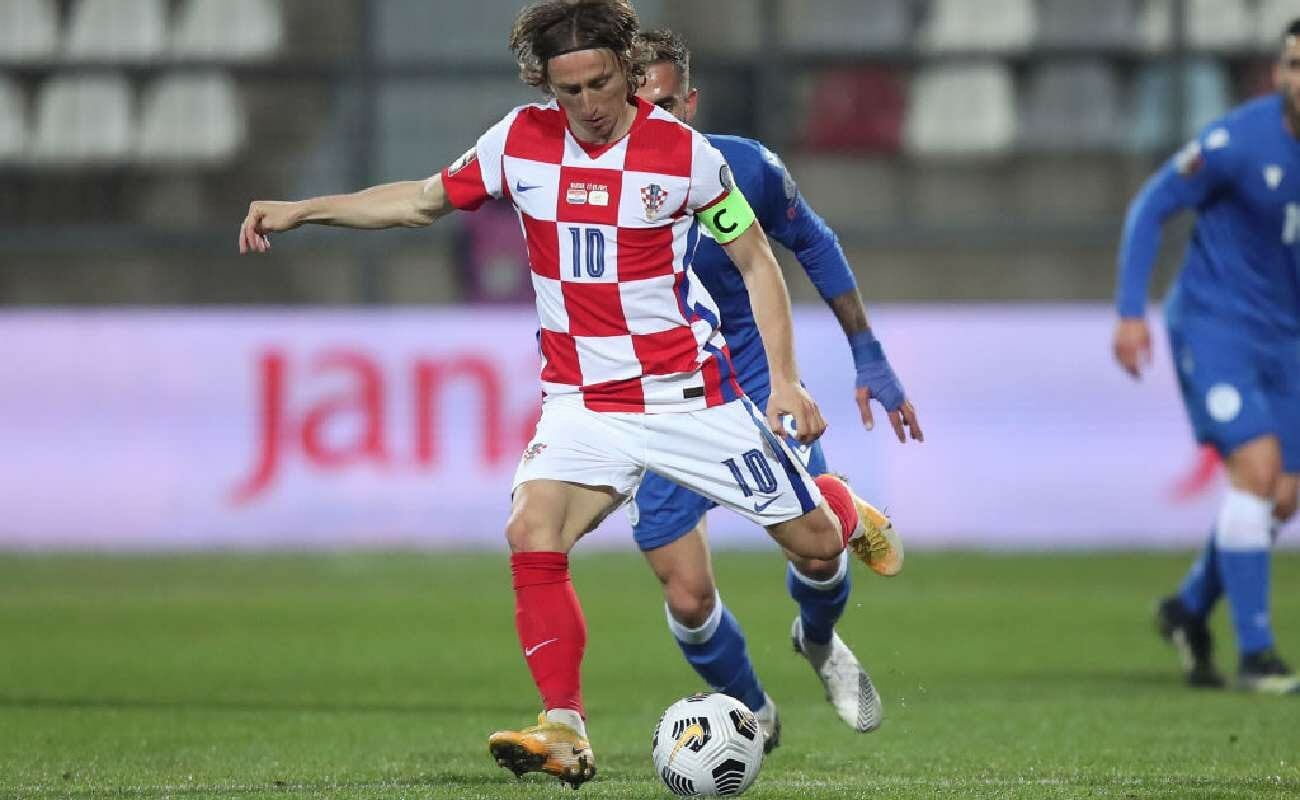 It was Croatia that crushed English dreams in the 2018 World Cup on the way to the final. However, it’s clear that this team doesn’t possess the same drive and talent that it did during that tournament. It was a golden generation of players for the Croatia national team, but four of their starters from that run have since retired.

The absence of Ivan Rakitic, Subasic, and Croatia’s second-highest all-time goalscorer, Mario Mandzukic, are undoubtedly going to be felt by this team. Nikola Vlasic and Josip Brekalo are two young players that could add some spark and creativity to the team, but they are not quite at the same level as those they are filling in for.

Despite having a relatively small pool of high-quality players to choose from, Croatia have the experience to do well in this group and with England’s inconsistency, they’re going to make the race for top spot an uneasy one for The Three Lions.

Luka Modric is definitely the main man in Croatia’s squad. Despite turning 35 this year, Modric is still one of the world’s best midfielders. His superb performance in the 2018 World Cup showed just how talented he is and after a bit of a downturn in form — he is once again back to his blistering best.

Up top, Ivan Perisic has big boots to fill with Mario Mandzukic’s retirement. Although he’s been playing wing-back for Inter Milan, he’s still Croatia’s most prolific forward player and they will rely on him to score the majority of the side’s goals. 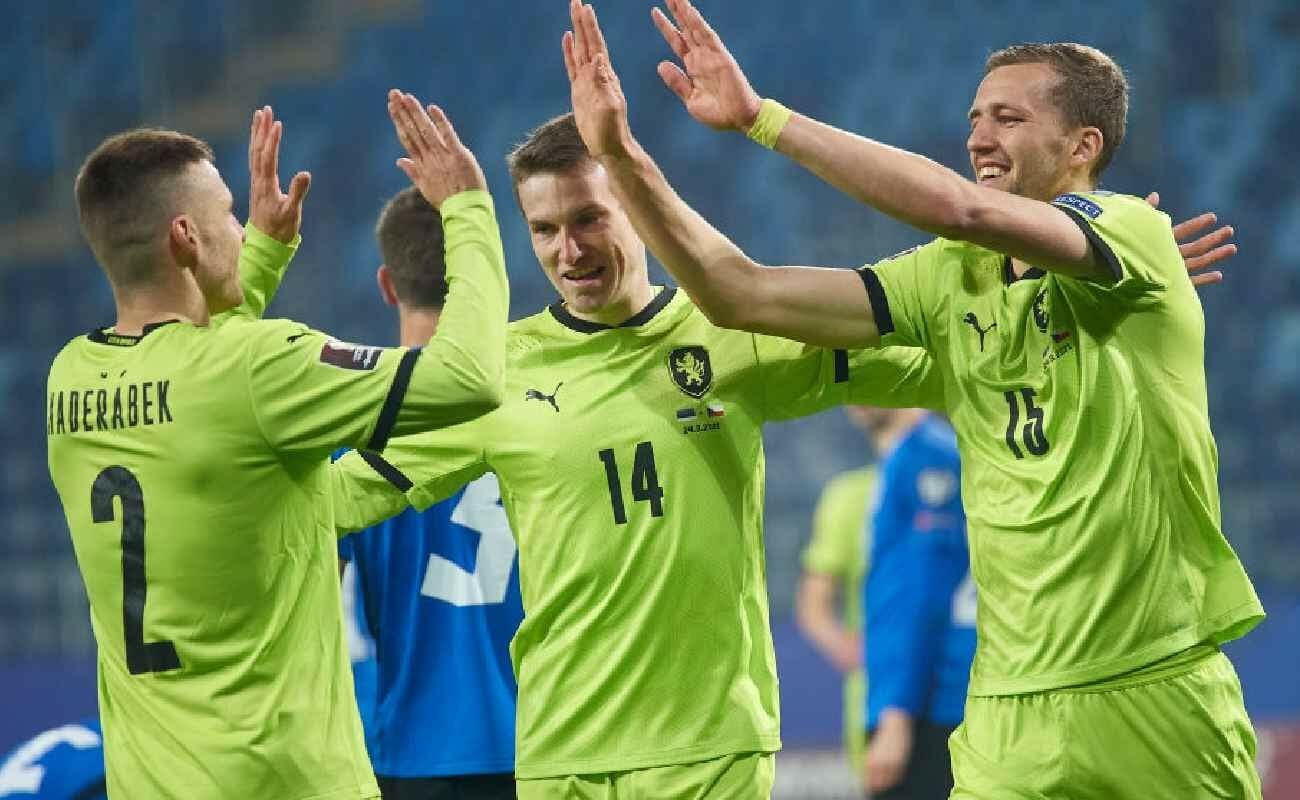 The Czech Republic are known for causing more problems in tournaments than they are given credit for. This year though, the perennial dark horses are not expected to have quite the same impact.

However, they have produced some good results against supposedly superior opposition in the run-up to Euro 2020. They beat group favorites England in their Euro qualifying campaign and held a seemingly unstoppable Belgium side to a draw during a World Cup qualifier in March this year.

Tomáš Souček provides a particularly effective aerial threat from set pieces and the team has got pace for counter attacks from midfield. If they are able to keep a solid defensive line, then they could cause some upsets.

There are only two players that really stand out in this Czech Republic team. The first is Tomáš Souček, who has had a prolific season for West Ham. The 6.4ft midfielder puts in a solid defensive display, but his aerial prowess is of particular importance and he is going to be the target man for all of this team’s set pieces.

Patrik Schick is another player to keep an eye on. He hasn’t played for Czech Republic since 2019 through a combination of injury and Covid, but he is a top-scoring striker for this team. Schick is a tall forward, but he’s incredibly mobile and has plenty of skill; he’ll be the most consistent goal-scoring threat during the tournament. 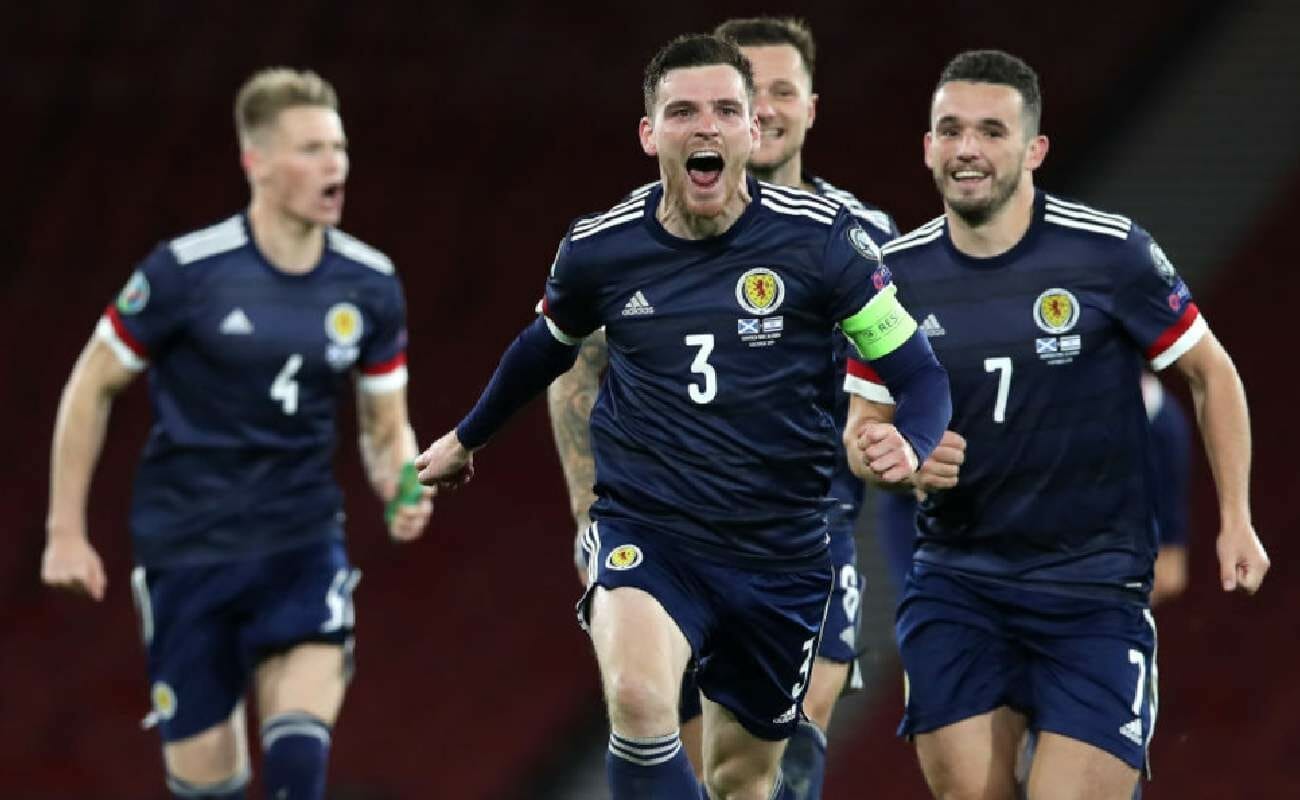 he 2020 UEFA Euros will be Scotland’s first major tournament since they took part in the FIFA World Cup in 1998. Despite the fact that they’ve been out of the limelight for some time, there are some telling signs that this team might do better than many expect.

The biggest concern for Scotland is their lack of world-class attacking players; however, they have plenty of depth in their squad with a range of players that have top-level Premier League experience.

Another issue that Steve Clarke has to contend with is that two of his strongest players both play in the same position. Andy Robertson is one of the best left-backs in the world, while Kieran Tierney is growing steadily for Arsenal. It seems that Clarke might have cracked this persistent problem by putting Tierney in as a center-back. While many criticized this decision, Scotland’s draw with the Netherlands in the lead up to the tournament put that scorn to bed. Tierney played tactically, tenaciously, and confidently. It looks like this could finally be the solution for the Scotland boss.

Scotland undoubtedly have a solid base in their team, but they do lack that creative player with the knack to break down defenses. Players like Scott McTominay, John McGinn, and Ryan Fraser are strong, capable players, but are not exactly going to sparkle. It’s Ryan Gauld and Che Adams’ inclusion in the team that looks most likely to take this predictable side that one step further in front of goal.

Scotland are a naturally defensive team and if they get a good result in their first game, then things will probably be a little more in their favor for this group. This will allow them to sit back, defend tight, and hit more talented teams on the counter attack if necessary.

“Indispensable” is probably the most accurate description of Andrew Roberston’s role for Clarke. He energizes the play from the left flank, provides astounding attacking passes, and crunches into tackles whenever his team lose possession. Robertson is captain for a reason and his passion and experience are key for Scotland’s hopes of progressing to the knockout rounds.

The midfield trio of Scott McTominay, John McGinn, and Billy Gilmour is a tantalizing one for the future of Scottish soccer. It’s McTominay that’s going to be the most important out of the trio for Clarke’s team this tournament though. McTominay will bring the same athleticism, resilience, defensive work rate, and attacking runs that he provides for Manchester United. His versatility will be key in unlocking Scotland’s attacking play.

Teams most likely to qualify from Group D

It’s no surprise that England have the best odds for topping Group D, given the sheer talent that they have in their squad. However, they can be inconsistent at times and will have to be at the top of their abilities in every single game during this group stage. It will be a shock if they don’t qualify for the knockout round in first spot.

Croatia is the other team most likely to make it through to the knockout phase. Their experience will likely see them through into second spot behind England. This is a tough group, however, and the odds could be a little unfair on Scotland and Czech Republic. Keep an eye on Group D for an upset.

The Euro 2020 tournament is expected to be the most exciting that we’ve seen in some time. Register with BetMGM for a range of up-to-the-minute bets on the 2020 Euros, from individual awards to outrights, futures, and much more. Get involved and place your bets with BetMGM today.