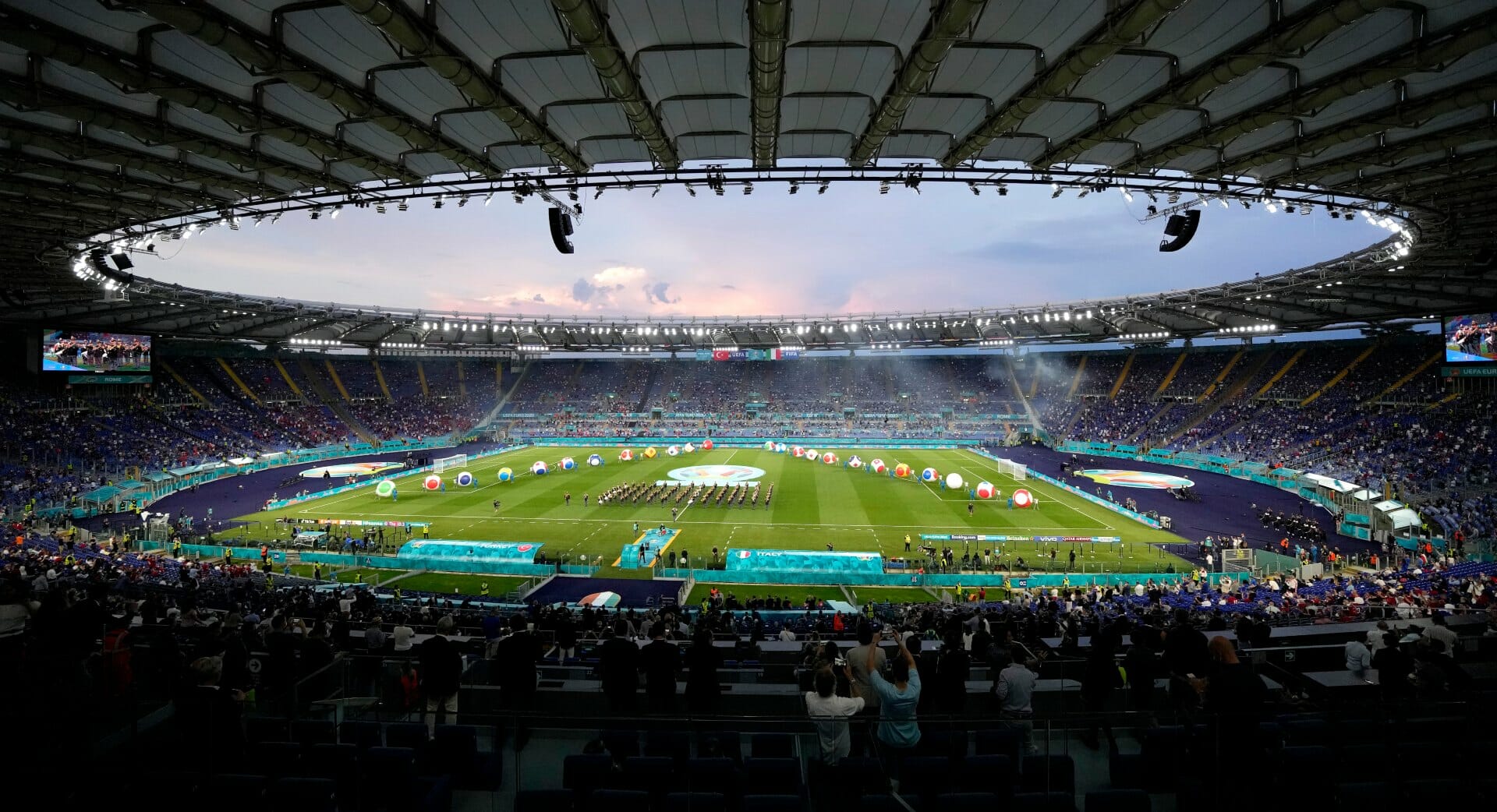 Italy, Spain, Denmark, and England booked their places in the Euro 2020 semi-finals over the weekend.

The first match will see the unstoppable Italians up against what has been a bit of an inconsistent Spanish side. The match will be played on July 6 at 20:00 BST at Wembley Stadium in London.

On Wednesday, July 7, the Three Lions will host Denmark in front of approximately 60,000 fans, as England hope to make it through to their first-ever Euro tournament finals.

Let’s take a look at the Euro 2020 betting odds, team news, predictions, and much more for the two Euro 2020 semi-finals.

Whenever there has been sublime soccer on show during the Euro 2020 tournament, it’s undoubtedly been during the matches that involved Italy. The Azurri were simply too good for Belgium and knocked out one of the tournament favorite’s in emphatic style.

The return of Giorgio Chiellini showed exactly why he is a crucial player for Roberto Mancini, and he helped to ensure a rock-solid defensive display. Of course, having the giant Gianluigi Donnarumma between the goals will benefit any team too.

However, it’s the Italian’s attacking style that has left many fans breathless. Lorenzo Insigne and Frederico Chiesa combine time and time again to produce magical moments high up the pitch. These are the men that the Spanish players are going to have to be incredibly wary of.

La Roja, on the other hand, have had a relatively inconsistent Euro 2020 tournament, and they only made it through to the semi-finals on the back of some paltry Swiss penalties that got them out of hot water.

Italy is probably the last team that Luis Enrique’s men want to face after two games of extra time and penalties. They will have to be at their defensive best if they hope to keep the silky attacking qualities of the Italians at bay.

Leonardo Spinazzola suffered a devastating Achilles injury in the game against Belgium. The Italian was stretchered off the field in tears, and it’s expected that his recovery will take months. Allesandro Florenzi is a slight doubt for the semi-final game, as he’s been carrying a knock and is likely to be replaced again by Giovanni Di Lorenzo.

Pablo Sarabia is the only injury concern for Luis Enrique after he suffered a muscle strain against Switzerland. If he isn’t fit for the semi-finals, you can expect Dani Olmo to come in again. Of course, fatigue could be the biggest issue for the Spanish, given that they have come off the back of two games that went to extra time and penalties.

Luis Enrique’s men will have to pull something incredible off if they want to beat Italy and make it to the finals. The Italians are unbeaten in 32 games, and it’s most likely that they will extend it to 33 after this match.

This is a very good Spanish side, but they seem to have regular lapses in concentration in defense that allows other teams to get back into the game. Any defensive errors will not go unpunished by a talented Italian team out to prove a point. The injury to Spinazzola is the only thing that could help Spain’s forwards have a little bit more freedom, but ultimately, it’s the Italians that are going to make it through to the final.

Denmark quickly became a fan-favorite after the collapse and cardiac arrest of talismanic Christian Eriksen. Although they lost that first match against Finland and then against Belgium, the Danes have shown determination and grit to get into the Euro 2020 semi-finals.

Of course, they owe much of their success to the seemingly unstoppable Kasper Dolberg. Dolberg had a poor season at Nice, netting only six goals, but he’s found his feet at this tournament and already has three goals to his name. The Danish defense is marshaled by Simon Kjaer, who has been incredible in his conduct and leadership throughout the tournament. However, they will have to be even more switched on if they want to contain an in-form England side in front of their fans.

England have never won at the Euros, and this could very well be the year that they do. Raheem Sterling has been simply magnificent, Harry Kane has started to find the back of the net, and Luke Shaw can’t seem to stop racking up assists.

Gareth Southgate’s biggest headache is a great one to have: Who to pick to start the semi-finals from a squad of hugely talented players. Will Jack Grealish get a look in? Or will Southgate stick to a more conservative team and bring on players like Grealish and Phil Foden when they need to make an impact?

One thing that’s for sure is that the Danish strikers have got some work to do if they want to get through the best defense in the tournament, who are yet to concede a goal.

England went back to a four-man defense for the win over Ukraine, and it’s unlikely that Southgate will tamper with this too much. Jadon Sancho got his first start of the tournament and impressed hugely; however, Bukayo Saka is expected to be fit for the semi-final and is likely to take his place.

Denmark have no fresh injury concerns to deal with and welcomed Yussuf Poulsen off of the bench against the Czechs, even though he is unlikely to replace Dolberg. Stryger Larsen is likely to retain his spot after assisting Delaney’s opener, despite Daniel Wass’s return to full fitness.

This is a match between two teams driven by determination, and that is going to show on the field. Although Denmark have enjoyed an incredible run at the Euros, you can’t help but feel that this is going to be the last game of the tournament for them.

They are up against a side that is yet to concede a goal and seem to have finally found their goal-scoring boots. Raheem Sterling is having the tournament of his career, Harry Kane has started scoring goals again, and they have a huge squad of talented players to choose from.

All of this, coupled with playing at home in front of around 60,000 fans all desperate for glory, it’s hard to believe that the Danes will get anything out of this match.

It will be a tight game with close margins, but ultimately The Three Lions should bring the house down at the full-time whistle at Wembley.

Go all the way to the final with BetMGM

The Euro 2020 tournament has been one of the best in recent memory – with upsets, surprises, and sublime soccer on show. We’re down to the most exciting matches, and we’re with you all of the way. With BetMGM, you get up-to-the-minute soccer betting odds for Euro 2020 and other major soccer events from around the world.

Register and place your bets with BetMGM sportsbook casino today!