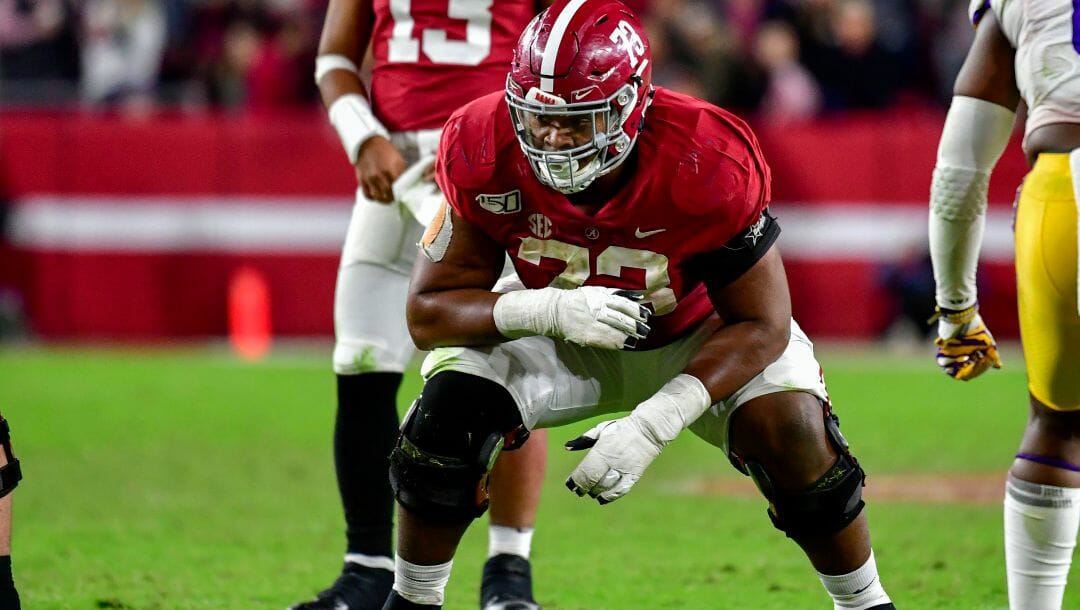 Alabama was 2 yards away from paydirt, and Evan Neal refused to allow his team to be denied a score.

Neal, an offensive lineman who has the best NFL Draft odds to be selected first overall, lined up along with seven other teammates at the line of scrimmage. In an obvious run situation, rival LSU stacked 10 near the line.

At the snap, Neal had taken a step before anyone else moved. He collided with defensive tackle Jaquelin Roy, seemingly putting him on skates, and shoved him out of the way. This cleared the way for Crimson Tide running back Brian Robinson Jr. to fall into the end zone.

Neal consistently exhibited this type of strength and skill, making him worthy of consideration for the No. 1 overall pick in the NFL Draft beginning April 28.

The Jacksonville Jaguars have the first pick and have needs at nearly every position except quarterback after selecting Trevor Lawrence No. 1 overall a year ago.

Neal is regarded as one of the best prospects in the draft, and for very good reason. He’s shown a remarkable aptitude for the position due to his intelligence, athleticism, technique and size. The Jaguars could need someone like Neal.

An offensive tackle may not be the most exciting pick, but Jacksonville fans should be ecstatic to pair Lawrence with a talent like Neal.

Neal, who protected quarterbacks including first-round pick Mac Jones and Heisman Trophy winner Bryce Young, was a consensus first-team All-American as a junior, his final year of college. He helped the Crimson Tide win their national championship during the 2020 season.

Neal displayed versatility in his three years of college. He started 40 games at three different positions, with 13 at left guard as a true freshman in 2019, 12 at right tackle in 2020 and 15 at left tackle in 2021.

Neal totaled a team-high 34 pancake blocks as a junior. He cleared the way for Alabama to become the nation’s sixth-best scoring offense (39.9 points per game) and No. 7 passing offense (338.2 yards per game). Alabama averaged 4.1 yards per carry in 2021 and gave up 2.8 sacks per contest.

In 810 snaps as a sophomore, Neal was credited with just six missed assignments, four quarterback hurries, three penalties and 1.5 sacks.

Evan Neal is -135 to be the first overall pick partially because he can do things like this pic.twitter.com/PvtI797FsG

Neal possesses an uncanny blend of sound fundamentals, quickness and acumen. This is all while standing at 6-foot-7. He also said during an NFL Combine press conference that he weighed in at 337 pounds, which is impressive considering how lean he is.

Neal’s height may mean he occasionally gives up leverage, but his pad level is often low. His footwork is consistent, and he makes sure to keep moving at the point of attack.

In Alabama’s win over Miami this past season, the Crimson Tide were backed up near their end zone. Neal began blocking defensive end Jahfari Harvey, who pushed toward Neal’s inside shoulder. Miami attempted to run a stunt and brought defensive tackle Jonathan Ford over from the opposite side.

But Neal passed Harvey off to another O-lineman and picked up Ford seamlessly. Both were sound blocks.

Neal has the speed to reach the next level and stay in front of linebackers.

Against LSU in 2020, defensive end Ali Gaye tried to rush the passer on the outside and use a swim move back inside, but Neal kept his hands on him. Gaye spun back out, but Neal was too quick. He shuffled over and pushed his opponent to the ground.

#Alabama OT Evan Neal says that he weighed in at 337 pounds prior to the Combine and that his versatility at both guard and tackle taught him a lot. Mentioned that Larry Allen is his favorite player of all-time. pic.twitter.com/7DdV5R6aXJ

Because he started at so many positions, he can line up with either hand in the dirt at the professional level. Neal occasionally whiffed on some blocks, but this was rare — and certainly not often enough for Jacksonville to disconsider him for the first pick.