The game has changed in the NFL. An elite running back is no longer necessary to find success as offenses evolve to a more spread style for mobile quarterbacks.

The value of running backs has gone down, as evident by online betting sites like BetMGM having one running back and nine quarterbacks in the top-ten favorites to win the 2020 MVP Award. Online sports betting and tracking NFL football odds and lines at BetMGM can make watching games more fun, just like a more entertaining brand of offensive football.

While some teams still have an old-school, run-the-football mindset, most NFL franchises aren’t running a back 30 times a game anymore. This means dominant rushing performances are uncommon.

There have been more than 55 four-rushing touchdown games. A player has rushed for five touchdowns in a game five times.

BetMGM is the best online sportsbook for up-to-the-minute NFL betting odds, lines, and tips to ensure the best NFL betting experience. Don’t miss an opportunity to bet on in-game lines, futures, and more at BetMGM.

Sam Herder is a writer for BetMGM and HERO Sports. A North Dakota State journalism grad, he spent several years in the print media industry before writing for online outlets. Sam has covered sports at all levels — high school, college, and professional — since 2011. 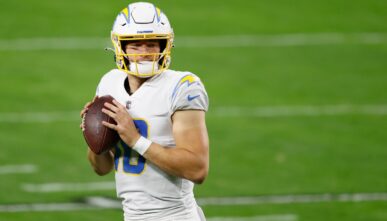