Skip to content
Home » Indy 500 Betting: Dixon Nabbed the Pole, But Will He Win It All?

Scott Dixon is sitting in a nice position for the Indy 500, both in the starting grid and the IndyCar odds. He possesses the coveted pole position for the 105th version of the event, and he’s an accomplished winner on the IndyCar circuit. If he does come home with the win, it’d be his second victory in the sport’s biggest race — 13 years apart.

Dixon has won four poles at the Indy 500, but only one race (2008), so that’s something to keep in mind. But the experience of the New Zealander, having won 50 races in the series and reaching more than 120 podiums in more than 300 career starts — it can’t be ignored. There’s a reason he tops the charts this weekend, in more ways than one.

Let’s take a look at what could happen this weekend:

Would you like a glass of milk? Dixon would.

With the Indy 500 champion and his crew being rewarded with a glass of champagne of the early-afternoon bovine variety, Dixon would savor that glass more than most. He leads the weekend’s odds, but he has plenty of competition.

He’s hard to ignore, isn’t he? He’s won in Formula 1, IndyCar, NASCAR, etc. He went 15 years in between his Indy 500 wins, the first coming in 2000 and the second coming in 2015. Montoya is always a motorsports racing threat, and has five IndyCar career victories to show it, along with 13 podiums — and he hasn’t been with this circuit all of his career.

Montoya, who is now 45 years old, is shooting for his third race win here and hasn’t been in the Indy 500 since 2017. Before this month, it had been 63 races since he’d been in the series at all. He’s won it twice in just five career starts at the race, and he holds the longest span of time in between wins (15 years, as mentioned above). He also took two other top-10 finishes here (2014 and 2017).

At BetMGM, we have up-to-the-moment motorsports racing odds, lines, and tips to ensure the best race betting experience. Don’t miss an opportunity to check out our online odds, futures, and more when you visit BetMGM.

Brian McLaughlin is a writer for BetMGM and co-host of BMac and Herd’s FCS Podcast. He has written for The Sporting News, headed up the PARADE Magazine High School All America teams, covered FCS college football for HERO Sports … and is a veteran reporter of five spring Daytona racing speed weeks (1997, 2006, 2007, 2008, and 2009). Follow BMac on Twitter @BrianMacWriter. 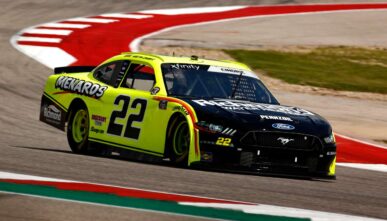