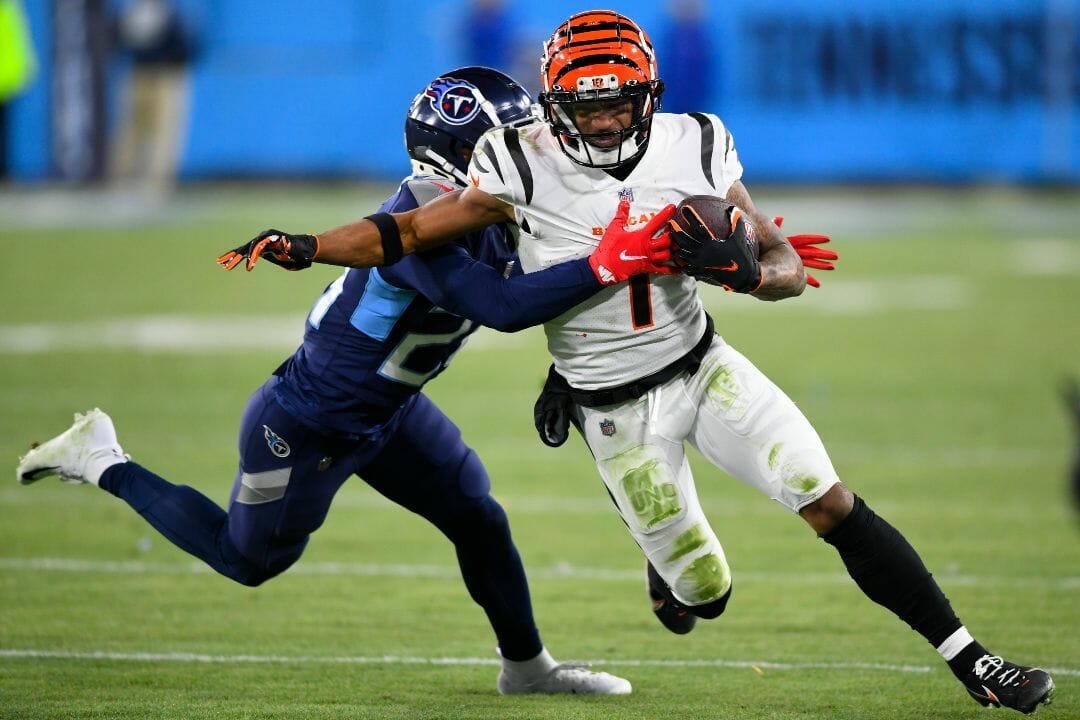 With a pre-snap signal, Joe Burrow knew exactly where he wanted to throw.

Cincinnati, which has Super Bowl odds of +800, had only 20 seconds to reach field goal range. At the commencement of the play, Bengals wide receiver Ja’Marr Chase drew Titans defensive back Jackrabbit Jenkins to the inside, then with outside leverage ran along the sideline.

Burrow recognized Chase, with Jenkins left behind, would be open on the bench route. Cincinnati head coach Zac Taylor said it’s a play “we’ve hit a million times.” The two Bengals played together at LSU, and their chemistry was evident.

“That was all on Joe on that play,” Chase said, though it wasn’t entirely true.

Chase created the separation needed, as he has all season. While Burrow is receiving a bright spotlight in recent weeks, he’s in his position in large part because of Chase and the other weapons around him.

The Bengals have NFL odds of +7.5 against the Kansas City Chiefs in the AFC Championship on Sunday. Chase has the 11th-best Super Bowl MVP odds at +4,000.

“Ja’Marr,” Burrow said of Chase’s late catch which set up Evan McPherson’s game-winning kick, “made a great catch and ran a great route.”

Chase finished the AFC Divisional game with 109 receiving yards on five catches. Most of his damage was done early.

Less than 10 minutes into the game, Burrow darted a pass over to Chase in the flat. The ball hardly crossed the line of scrimmage. Yet Burrow piled on 57 yards to his total for the day.

Chase eluded a defender and bolted to put the Bengals at Tennessee’s 30.

“It was spectacular to watch Ja’Marr make the DB miss in space and then really turn on the jets,” Taylor said. “He’s got tremendous speed and almost finished the play off.”

Chase, an All-Pro as a rookie, is sixth in the league according to Football Outsiders’ DYAR metric, which accounts for variables like opponent and situation. He’s behind the likes of Cooper Kupp of the Los Angeles Rams and Davante Adams of the Green Bay Packers. He’s also a spot behind teammate Tee Higgins, and Tyler Boyd is in the top 50.

As seen in their playoff win over the top-seeded Titans, the Bengals needed more than just Chase. That was especially crucial with Joe Mixon averaging 3.9 yards per carry on the ground and Cincinnati giving up nine sacks, a postseason single-game record.

With nine sacks, the Titans are tied for the single-game #NFL postseason record. #CINvTEN https://t.co/d1W6KZ46Cf

They turned to their receivers, who have been dependable for a great portion of the season. And they have someone suited for different schemes.

Against man coverage, Chase is Pro Football Focus’ sixth-best receiver among those in the top 50% in targets while Higgins is 19th. Against zone, Higgins is 11th and Chase is 12th.

Chase is rated third by PFF on deep routes. On intermediate routes, Higgins is 11th. And on short routes, Boyd leads the Bengals as he’s 16th while Higgins and Chase are tied for 17th.

That last skill was particularly vital when Burrow had less time to operate.

“As receivers,” Chase said when asked about the importance of explosive plays despite the pressure on Burrow, “we’ve just got to speed our routes up, run shorter routes and try to make plays after the catch.”

Four Bengals finished with more than 50 yards through the air last weekend, including Higgins with 96. Mixon added 51 yards receiving, still managing to account for 105 total.

The Bengals, Taylor said, can manufacture Mixon’s production through checkdowns. And the Pro Bowler capitalized.

“The effect that he has on the defense over the course of the game, whether it’s a run or pass, is significant,” Taylor said. “And I thought he had a great performance for us.”

Burrow was the one successfully delivering the ball, but the Bengals’ receivers have boosted their team beyond that. Chase and Higgins, for example, are in the NFL’s top 25 in yards after catch per reception with Chase second at 8.1.

Chase has been motivated. After last week’s contest, he expressed little excitement. Only a championship, he said, would bring that out.

“People have tried to put the underdog card on us. We don’t subscribe to that,” Taylor said. “We believe that we’re as good as any team in the NFL.”

That, in no small part, is due to the talent of his team’s skill players.