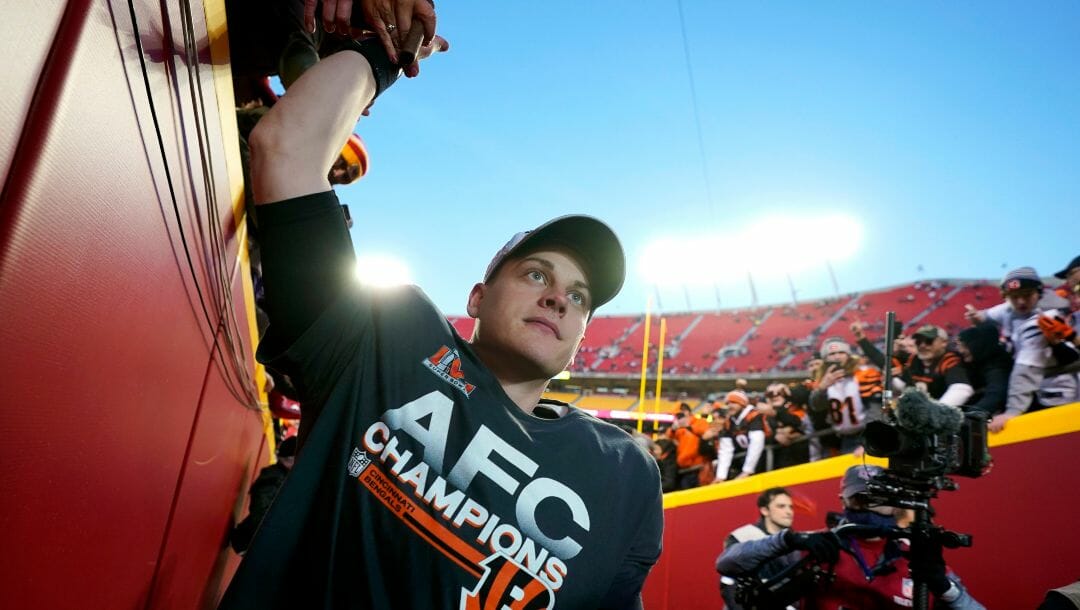 LeBron James was tweeting at him. Kid Cudi was reaching out to him. None of it felt real to Joe Burrow.

The Cincinnati Bengals quarterback, who has the second-best Super Bowl MVP odds at +210, was selected first in the NFL Draft less than two years ago. This was following a meteoric rise at LSU that consisted of a national championship and a Heisman Trophy.

And following a 2020 season ended by a knee injury and his team finishing last in its division, Burrow and the Bengals have reached the Super Bowl.

Wearing a chain covered in jewels — he said he made too much money for them to be unauthentic — Burrow claimed the attention from celebrities was uncanny. He was “just the same old guy.”

“That part is surreal,” Burrow said. “The football part, not so much.”

That’s because he believed this point was, in fact, realistic. The swagger of the second-year signal-caller is striking.

It’s a significant reason he’s garnered so much attention. His performance, his poise under literal and figurative pressure, is another.

That confidence has been a staple for the Bengals in their quest to win a championship. Their opponent, the Los Angeles Rams, is favored with the Super Bowl betting line of 4.5 points. The Bengals’ odds to win Super Bowl 56 are +165.

But the Bengals have been carrying a profound certainty, considering the franchise had suffered the NFL’s longest postseason victory drought before this year. That begins with Burrow.

“I think if you would’ve told me coming into the league when I got drafted that we would be here this year, it would be a shock,” Burrow said. “Now I’m not surprised. I’ve been playing this whole year, and I knew we’d have a chance to be here.”

Joe Burrow has a chance to make history 👏

Burrow has completed 70.1% of his passes for 5,453 yards, 38 touchdowns and 16 interceptions. He’s rated No. 1 by Pro Football Focus among passers who have taken at least 20% of the most dropbacks in the league. This is despite his offensive line being graded 25th in the NFL in pass blocking.

Bengals head coach Zac Taylor acknowledged during the AFC Championship that he called a play that didn’t work as he hoped. The Chiefs were blitzing and had receivers covered. Nothing, Taylor said, appeared to be a favorable option.

Yet Burrow scrambled and found receiver Ja’Marr Chase across the middle of the field. Taylor called that sort of play “his bread and butter.”

“He just finds a way to make plays when there isn’t a play to be made,” Taylor said. “It makes my life much easier. It doesn’t have to be the perfect play call. He is going to figure it out.”

Burrow threw for 250 yards on 23-of-38 passing for two touchdowns and one pick. After the Bengals trailed 21-3 in the second quarter against Kansas City’s juggernaut offense, they came back to win in overtime. Even at that point, Burrow claimed he trusted his team would triumph.

Bengals defensive end Sam Hubbard recalled telling Burrow before he was drafted, “We need you. You’re the guy to turn this around. I know it.”

And he was. When the Bengals intercepted a pass by Patrick Mahomes in overtime, Hubbard said, “it was in Joe’s hands, and we’re good.”

“You can’t even write stories like this,” Hubbard said. “It’s amazing.”

In critical moments, Taylor takes solace in knowing the Bengals could turn to Burrow. On Cincinnati’s first offensive play in overtime, he completed a 9-yard pass to Tee Higgins. On second-and-8 on Kansas City’s 40, Burrow found Higgins again for 8 yards.

At that point, Burrow and the Bengals were well within field goal range and reach of a Super Bowl berth.

“When the game is on the line,” Taylor said, “he is going to figure it out.”

Burrow didn’t feel “surreal” was an appropriate word to describe the accomplishment. Maybe because he was adamant of his team’s potential to do so.

He didn’t exactly think of the season as a turnaround after 2020, a past that’s in contrast to the present. In the wake of the Bengals’ 4-11-1 record, he simply began toiling for opportunities to win. And a Super Bowl, he said, “is what you work so hard for.”

“If you would’ve told me before the season started that we’d be going to the Super Bowl, I probably would’ve called you crazy,” Burrow said. “But then we played a whole season and nothing surprises me now. I know the kind of guys that we have and the team that we have. There’s still one left and we’re excited about this one.”

Joe Burrow says Kid Cudi, originally from Ohio, was one of his idols growing up and still listens to his music before every game.

The rapper reached out to Burrow before yesterday's win 🙌 pic.twitter.com/V7uHgHGcn7

Burrow was asked after the AFC Championship what his favorite Kid Cudi track was. He replied that he listens to “New York City Rage Fest” every game day soon before taking the field.

The song has no lyrics, and it’s fitting. Words can only go so far to illustrate what Burrow provides the Bengals. The feeling of fiery conviction that’s seeped into the franchise is indescribable, and it begins with its quarterback.