Joe Burrow’s 9-yard completion to Tyler Boyd in the final two minutes of Super Bowl LVI ultimately proved meaningless as the Cincinnati Bengals failed to gain 1 yard on the ensuing three plays. For one BetMGM customer, however, the completion was worth $50,000.

Prior to kickoff at SoFi Stadium, the customer placed a $100 wager on a nine-leg One Game Parlay with odds of +5000: 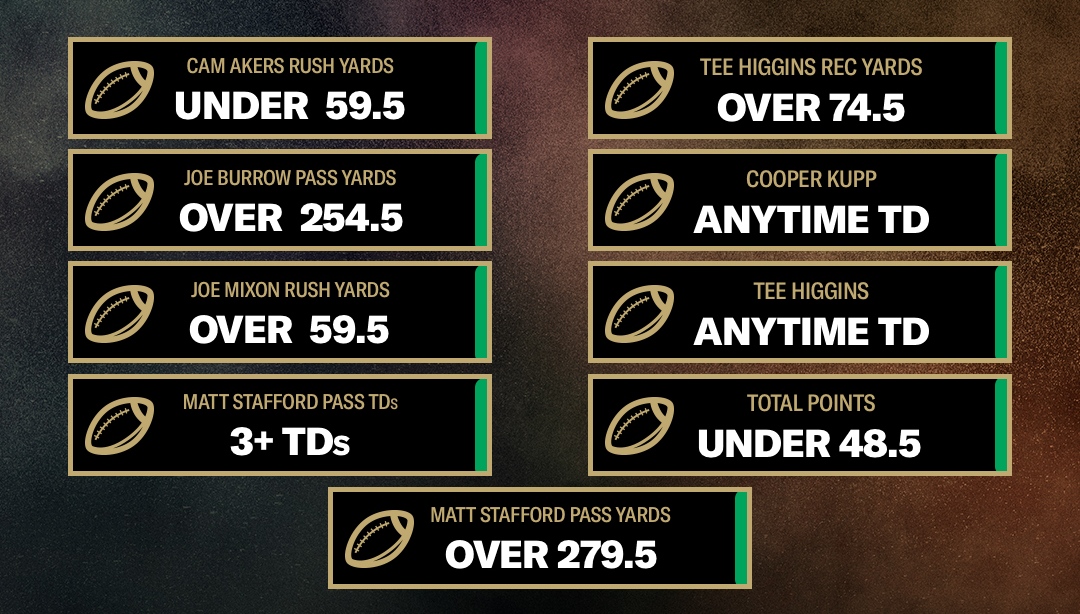 Entering the Bengals’ final drive, five legs officially hit and one more – Akers under 59.5 rushing yards – was all but guaranteed to hit. In order for the final two to hit – Burrow over 254.5 passing yards and total points under 48.5 – the customer needed a non-scoring drive in which Burrow had at least 18 passing yards.

If the Bengals tied or won the game in the regulation, the game total would’ve gone over unless there was a game-winning safety in regulation or overtime.

After a 17-yard completion to Ja’Marr Chase on the first play, Burrow hit the over on 254.5 yards with the 9-yard completion to Boyd on the second play. And when the Bengals were stopped on fourth down two plays later, the One Game Parlay cashed, earning the customer a $50,000 payday on a $100 wager.

What is a One Game Parlay?

Parlays have been a staple of sports betting for decades. At the online sportsbook, you can take parlays to the next level with One Game Parlays, a unique opportunity to add more excitement to a game regardless of the score or stakes.

Available for thousands of events each year, One Game Parlays allow customers to combine their favorite bets from one game into a single parlay. And instead of waiting several hours or days for a traditional multi-game parlay to cash, a One Game Parlay cashes within, for example, the two- or three-hour window of a single game.

One Game Parlays are a unique and exciting way to add more entertainment to your online sports betting experience.

A popular option for those seeking to leverage their sports and betting knowledge into bigger (and quicker) payouts, BetMGM’s One Game Parlays are available for thousands of events each year. Check out NFL parlays, college football parlays, and more.