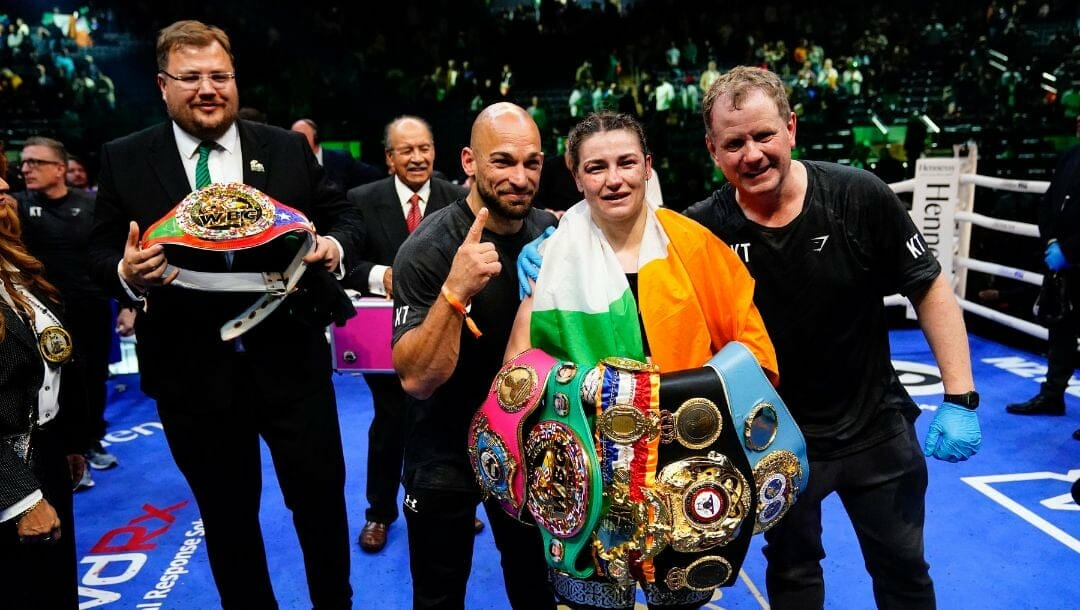 The reigning undisputed lightweight champion and the world’s number one women’s pound-for-pound boxer Katie Taylor (21-0) is back inside the ring to face the challenge from undefeated contender Karen Elizabeth Carabajal (19-0) inside Wembley Stadium in London, England this Saturday, October 29. This fight between Taylor and Carabajal will be part of a stacked boxing betting lines this weekend.

Taylor will come in as the heavy favorite to win in the boxing odds at -2500 against the Argentinian boxing star Carabajal who will be making her debut outside Argentina. Although the two are undefeated fighters, the Irish superstar’s credentials and level of competition make her the favorable winner of this bout against Carabajal, who is the overwhelming underdog at +1000.

Katie Taylor is coming off her famous split decision victory over Amanda Serrano in April 2022, where she retained her IBF, WBA, WBC and WBO World Lightweight Titles and solidified her place as the number one pound-for-pound female fighter in the world. After an illustrious amateur career from 2005 to 2016, where she won multiple tournaments, Taylor made her professional debut in 2016.

She faced Karina Szmalenberg and stopped her in the third round of their fight in November 2016. Three more victories over Viviane Obenauf, Monica Gentili and Milena Koleva have earned her first crack at a title. Taylor was pitted against Nina Meinke in April 2017 for the vacant WBA International Lightweight Title. The Bray, Ireland native breezed past Meinke with a seventh-round TKO finish.

After that triumph, Taylor defeated Jasmine Clarkson before competing in her first major title fight in October 2017 versus Anahi Ester Sanchez, whom she unanimously beat to capture the WBA World Lightweight Title. Since then, she has been able to win all four championship belts. The 36-year-old scored a one-sided decision win over Victoria Noelia Bustos in April 2018 to pick up the IBF World Lightweight Title.

Four fights later, Taylor went on to win the WBO Lightweight Title with a ninth-round TKO stoppage victory against Rose Volante in March 2019 before finally unifying all the titles in the 135-pound division with a majority decision win over Delfine Persoon and bagging the WBC Lightweight Title. The Irish boxing superstar briefly moved up to the super lightweight division to challenge Christina Linardatou in November 2019.

She was successful in her quest to win another title in a different weight class after unanimously beating Linardatou. Taylor returned to her natural division and strung six successive title defenses with triumphs over Miriam Gutierrez, Natasha Jonas, Jennifer Han, Firuza Sharipova and Amanda Serrano.

On the other hand, Karen Elizabeth Carabagal has been dominating the boxing competition in Argentina by going undefeated in 19 fights, including two TKO/KO finishes. She made her professional debut in August 2013 versus Vanesa del Valle Calderon and unanimously beat her. The Buenos Aires native needed 12 straight victories to earn her first boxing title.

The Argentine’s latest win came at the expense of Lorena Edith Agoutborde in April 2022, where she picked up her 19th professional win and secured the biggest boxing match of her life against the reigning undisputed lightweight champion Katie Taylor.

Katie Taylor vs. Karen Elizabeth Carabajal: Tale of the Tape and Fight Analysis

The significant difference in the odds between Katie Taylor and Karen Elizabeth Carabagal is not an accident, which can be pointed out for different reasons. Currently, Taylor is the undisputed number one women’s pound-for-pound boxer in ESPN’s rankings, while Carabajal is nowhere to be found in the top ten list.

First, Taylor is the defending champion and is fresh off a successful title defense against Amanda Serrano, who is also considered one of the best fighters today. Second, Taylor has fought more challenging opponents and oppositions than Carabajal, who only competed in her home country throughout her professional career.

Another factor is the discrepancy in experience, as the Irish sensation has more fights under her belt dating back to her amateur days. Meanwhile, Carabajal doesn’t have a solid history of her early career in boxing other than her professional record. I personally believe that the Argentinian to be a tune-up fight for Taylor, who is expected to face Amanda Serrano in a rematch.

Stylistically, Carabajal might be the perfect matchup for Taylor as the former uses her jab to pressure her opponents and throw combinations when they obliged to the pressure that she will apply. But the 36-year-old veteran has the tools to neutralize this by using her footwork and speed to counter these jabs that “Burbuja” will throw at her. Additionally, Carabajal also has the tendency to get caught by counters when she throws power punches.

This will be a quick night at the office for Katie Taylor as she adds another victory to her record and adds Karen Elizabeth Carabajal to her growing list of victims.