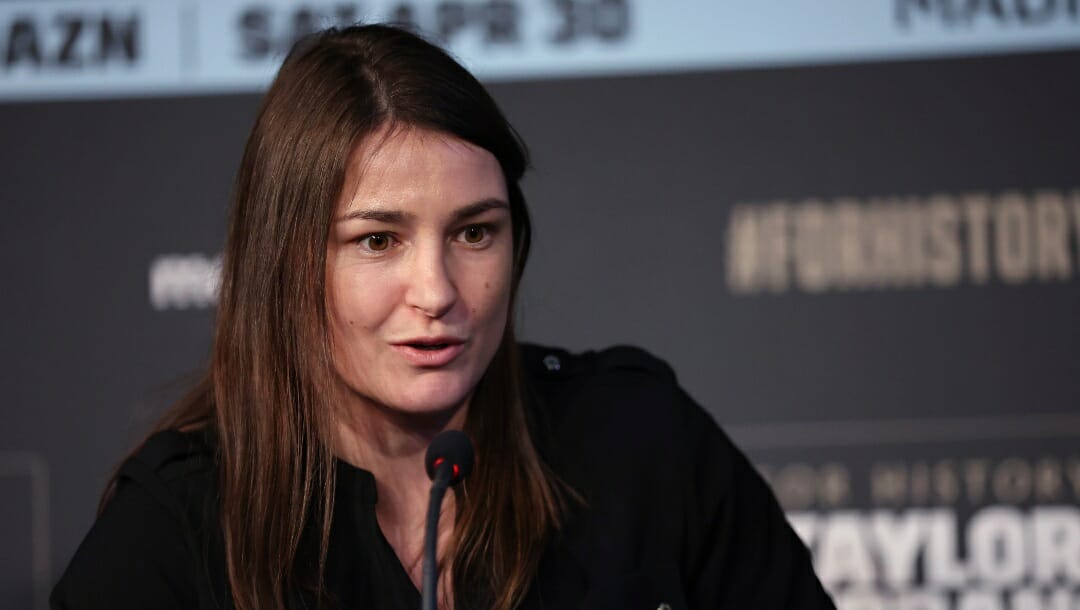 Undefeated boxing star Katie Taylor will headline the biggest women’s fight of all time this Saturday, April 30, as she defends her undisputed lightweight champion status against Amanda Serrano inside Madison Square Garden. The Irish sports icon is the slight underdog in the boxing odds at +110 as of April 25.

Despite not having a loss on her professional record, Taylor is still the online boxing betting underdog.

Here’s a look at her professional career record so far.

Katie Taylor was born in Bray, Ireland, where she picked up boxing at the age of 11 as her father, a former national senior light heavyweight champion, and her brothers were trained by him.

Four years after learning the sport, Taylor appeared in her first amateur fight and defeated her opponent masterfully on points. From that point on, she collected an enormous amount of accolades.

She represented Ireland in various international championships, and in the process, Taylor became a multiple-time European champion, a five-time world amateur champion and an Olympic gold medal at the 2012 London Olympics.

These achievements helped her seamlessly jump onto the professional stage in 2016.

Katie Taylor officially became a pro when she fought Karina Szmalenberg Kopinska in November 2016 for a dream debut and finished her via a third-round TKO. She then picked up four more wins over Viviane Obenauf, Monica Gentili, Milena Koleva and Nina Meinke before making her U.S. debut against Jasmine Clarkson in July 2017 by way of a third-round corner stoppage.

The ‘’Bray Bomber’’ first tasted a championship in October 2017 after dominating Anahi Ester Sanchez unanimously to claim the vacant WBA World Female Lightweight Title. She defended her title against Jessica McCaskill and claimed the IBF World Female Title over Victoria Noelia Bustos in her next two contests, both of which were unanimous decision wins.

In 2019, the Irish sports icon unified all the lightweight titles by stopping Rose Volante in the ninth round of their showdown in March before scoring a majority decision victory over Delfine Persoon three months later to obtain the WBO World Female Lightweight Title and WBC World Female Lightweight Title, thus becoming the seventh boxer in the history of the sport to simultaneously hold all four major titles (WBC, WBO, WBO and IBF) at once.

After becoming the undisputed queen of the 135-pound division, Taylor embraced another big challenge by moving up a weight class and faced Christina Linardatou in November 2019 to claim her second weight title. The former Olympic gold medalist showcased her skills against the Greek fighter in the 10-round clash of champions to snatch the WBO Junior Welterweight Title.

Many thought that Taylor would permanently stay in the 140-pound division after that clinical victory over Linardatou. Still, she returned to the lightweight division to face Delfine Persoon in a rematch to prove that her first win was not a fluke. This time, she ended the controversy by unanimously winning in the second match.

Taylor extended her dominant reign in the lightweight division as she defended her titles over Miriam Gutierrez in November 2020, Natasha Jones in May 2021, and Jennifer Han in September 2021. Her latest casualty is Firuza Sharipova, whom she lopsidedly beat via unanimous decision in their showdown last December 2021.

The decorated Irish superstar will face her biggest test on Saturday night when she meets Amanda Serrano in the ring to certify her place as the division’s long-tenured title-holder. The betting underdog coming into the match, Taylor will utilize her three-inch reach advantage over the younger Serrano.

Her first-class footwork should be on display during the bout, especially since the Puerto Rican challenger has a high finishing rate of 68 percent, compared to Taylor’s 30 percent, making Serrano a dangerous foe with heavy knockout power.

This aforementioned elite footwork is paired with her left hook, and expect the defending champion to use this as the primary weapon to potentially counter the power punches that Serrano will be throwing.

Where to Watch Katie Taylor’s fight

You can watch Katie Taylor’s fight when you subscribe to DAZN and sign up here. DAZN subscribers can stream the fight on multiple devices, including mobile devices, TVs, and gaming consoles.