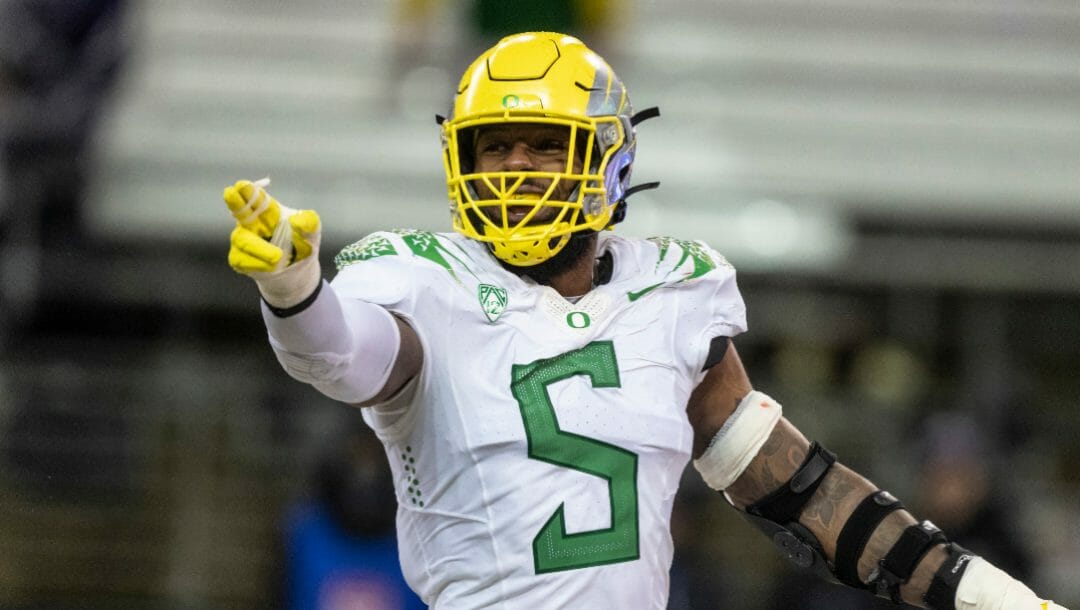 Kayvon Thibodeaux was met by two blockers, and he needed as many seconds to take down the quarterback anyway.

This past season, Fresno State’s tackle and guard both tried to stop the Oregon edge rusher. But Thibodeaux, who’s in contention to be selected first overall in the NFL Draft, was too fast. He set up on the outside and drew the tackle that way, darted between his opponents, then forced a fumble that set the Ducks up within Fresno State’s 5-yard line.

“Game-wrecker” has been a term associated with Thibodeaux, and his tape backs it up.

Kayvon Thibodeaux on the Giants giving him a "hard time" in his interview last night. 👇

Thibodeaux has the fourth-best NFL Draft odds to be selected first overall at +1500.

The Jacksonville Jaguars have the No. 1 overall pick, and they have needs essentially everywhere except quarterback after selecting Trevor Lawrence a year ago.

The Jaguars could use Thibodeaux’s skills, but they may be better suited drafting Neal. The Detroit Lions would then have a tough time passing up Hutchinson, a Heisman Trophy runner-up.

So the Houston Texans, at No. 3 overall, would be a solid landing spot for Thibodeaux. Houston ranked 23rd in defensive DVOA, 23rd in adjusted sack rate, and 25th in adjusted line yards on the ground last season, according to Football Outsiders.

Who does Kayvon Thibodeaux model his game after? 👀 pic.twitter.com/IlmguTKY5B

After promoting Lovie Smith from defensive coordinator to head coach this offseason, the Texans may be looking to bolster that side of the ball. With this being such a strong draft in terms of the offensive and defensive lines, Thibodeaux and his skill set would make sense here.

Thibodeaux is tied for seventh all-time at Oregon with 19 career sacks in 31 games. His 34.5 tackles for loss were fifth among Power Five players since the beginning of 2019.

Thibodeaux also shined on the biggest stages of his college career. He amassed 21 quarterback pressures, 13 tackles, 5.5 tackles for loss, and 4.5 sacks in three Pac-12 Championship games.

Thibodeaux was ranked 12th among FBS pass rushers by PFF as a sophomore in 2021. He racked up seven sacks and 12 TFLs, both team highs, with 48 quarterback pressures and 28 hurries. That was despite missing three games.

In 2019, Thibodeaux broke the freshman record with a team-high nine sacks, leading the country with seven in the fourth quarter. He also led the team with 14 TFLs. Additionally, he set a conference championship game record with 2.5 sacks.

A year later, he started all seven of Oregon’s games and led the team in sacks (three) and TFLs (9.5) for a second straight season. According to PFF, he led the Pac-12 in QB pressures (34) and hurries (27), with 23 of those pressures being in the last three games and 12 being in the Pac-12 Championship.

Thibodeaux’s most remarkable trait is his first step. Even in the NFL, few will easily keep up with him at the snap of the ball.

Against Cal in his final year of college, offensive lineman Will Craig needed to catch up to Thibodeaux even before the quarterback caught the ball. Thibodeaux ripped underneath, and even though Craig was called for holding, the Oregon star sacked the passer almost immediately anyway.

At 6-foot-5, 258 pounds, Thibodeaux has the length, speed, and an expansive arsenal of moves to put offensive lineman out of position in a hurry. Either they step out too wide in pass protection and Thibodeaux can cut inside, or he’s too fast and uses a Von Miller-esque bend to win around the edge.

#Oregon DL Kayvon Thibodeaux, who loves to play chess, talking about the similarities of chess and football.

In a game with Washington State, Thibodeaux stutter-stepped and forced offensive lineman Liam Ryan to the outside, in part because he’s so fast and demands that precaution. But this opened up a lane to the quarterback on the inside, and Thibodeaux took advantage.

Thibodeaux can also be explosive while defending the run. He can blow up trap blocks and long-arm offensive linemen in order to hold an edge. However, he can occasionally be too eager at the snap and be drawn offsides.

He also has the discipline to contain the edge, which led to him halting wide receiver perimeter runs his way. His speed allows him to keep up with skill players in confined spaces.

This past season in Oregon’s contest with Stanford, Thibodeaux was to be blocked by a guard and tackle. But he kept his arms extended and drove them back, showing his strength. He finished the play with a tackle near the line of scrimmage.

Thibodeaux’s range of comprehensive abilities would do well for a rebuilding Texans defense.