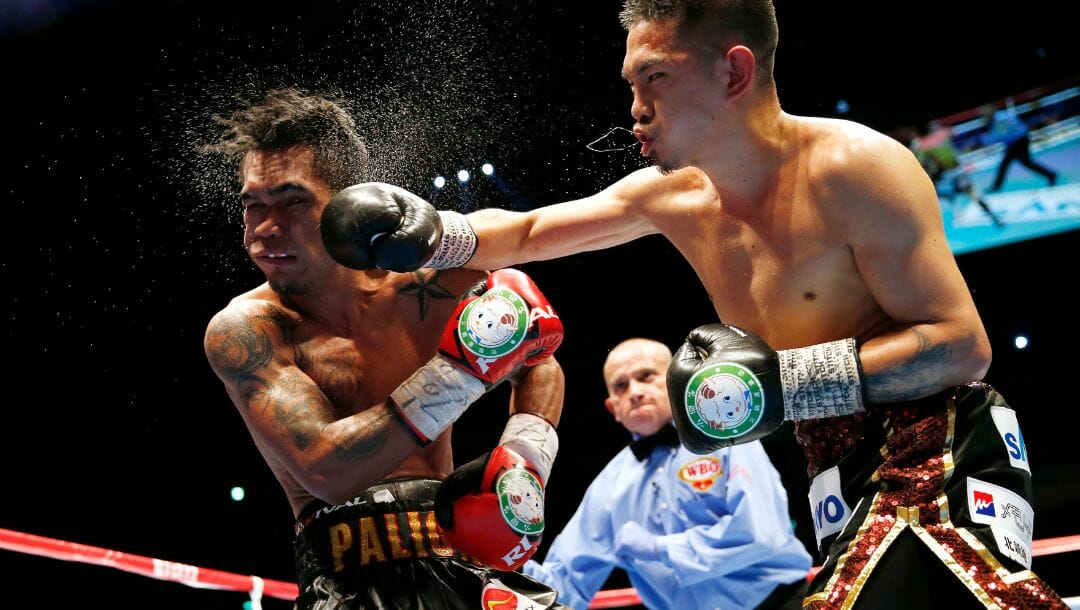 Before the year ends, a super flyweight unification bout goes down on December 31 as WBO World Super Flyweight Champion Kazuto Ioka (29-2) collides with WBA World Super Flyweight Champion Joshua Franco (18-1-2) inside the Ota-City General Gymnasium in Tokyo to close 2022. The Japanese champion comes in as the favorite in boxing odds at -160, while the American WBA title holder will be the underdog in online sports betting at +140.

Kazuto Ioka and Joshua Franco have agreed to terms for a 115-pound title unification on Dec. 31 in Japan, a source told ESPN. Another big-time fight on New Year’s Eve in Japan, where Ioka hails from. Winner will be in position to fight winner of Chocolatito-Estrada 3 on Dec. 3.

Ioka will come in as the slightly-favored boxer to win the fight due to his substantial experience against Franco. The former also had more formidable opponents compared to the latter. The winner of this WBO and WBA title match will likely face Juan Franciso Estrada in another unification bout with the WBC Super Flyweight Title on the line as he recently edged out his rival Roman Gonzales in their trilogy fight.

Before turning professional in 2009, Kazuto Ioka was an accomplished amateur boxer who amassed an incredible 95-10 win-loss record and became a Bronze medalist during the 2008 King’s Cup in Bangkok, Thailand. After this impressive run, he jumped into the paid ranks and scored a third-round TKO win over Jadsada Polyiam in his April 2009 debut. He followed it up with four more victories against Hiroshi Matsumoto (second-round TKO), Takashi Kunishige (unanimous decision), Heri Amol (unanimous decision) and Albert Alcoy (ninth-round TKO).

This five-fight winning streak earned Ioka his maiden boxing title shot for the vacant Japan Boxing Commission Light Flyweight in October 2010, where he TKO’ed Masayoshi Segawa in the tenth round of the match. Following this minor title triumph, the boxer from Osaka defeated Kittipong Jaigrajang in February 2011 to capture the WBC World Minimum Title via fifth-round TKO. He was able to defend it twice against Juan Hernandez Navarrete (unanimous decision in August 2011) and Veerawut Yuthimitr (first-round TKO in December 2011).

Before his move in weight, Ioka was able to add the WBA World Minimum Title after unanimously beating Akira Yaegeshi in June 2012. After this successful run in the 105-pound division, the 33-year-old competed in the light flyweight division and was welcomed by Jose Alfredo Rodriguez in December 2012, where they fought for the vacant WBA World Light Flyweight Title. Ioka stopped Rodriguez in the sixth round to become a two-division world champion.

The now Tokyo resident immediately defended his crown three times with wins over Phissanu Chimsunthom (ninth-round knockout in May 2013), Ekkawit Songnui (seventh-round knockout in September 2013) and Felix Alvarado (unanimous decision in December 2013). Because of this phenomenal run in his new weight class, Ioka once again moved up in weight to challenge Amnat Ruenroeng in May 2014, but instead of winning his third title in his third division, he received his first career loss as Ruenroeng eked out a split decision victory over him.

Despite the loss to Ruenroeng, Ioka continued to compete in the flyweight division as he bounced back instantly with wins against Pablo Carrillo (unanimous decision in September 2014) and Jean Piero Perez (fifth-round TKO in December 2014). The back-to-back victories became his jumping board to challenge for another title, this time against Juan Carlos Reveco for the WBA World Flyweight Title. It was another close decision result, but Ioka got the nod from the judges via a majority decision to obtain another world title in another division.

Ioka wasted no time during his WBA World Flyweight reign as he fended off challenges from Roberto Domingo Sosa (unanimous decision in September 2015), Juan Carlos Reveco in their rematch (11th-round TKO in December 2015), Keyvin Lara (11th-round knockout in July 2016), Yutthana Kaensa (seventh-round TKO in December 2016) and Narast Ajenleng (unanimous decision in April 2017). These achievements were not enough for Ioka because he embarked on another journey to compete in a higher weight class.

In September 2018, Ioka jumped to the super flyweight division to face the WBC Silver Super Flyweight Champion McWilliams Arroyo, and he masterfully beat him via unanimous decision. However, the Japanese’s dream of calling himself a four-division world champion was delayed by Donnie Nietes as he yielded a split decision loss to the Filipino in their December 2018 showdown for the vacant WBO World Super Flyweight Title. This was only a minor bump in the road because Ioka was able to win the coveted belt six months later.

Ioka’s latest victory was a revenge victory against former tormentor Donnie Nietes in July 2022, where he dominated the Filipino boxer and scored a masterful unanimous decision win to retain his WBO World Super Flyweight Title.

Unlike Kazuto Ioka, who started his professional career in the lower weight class, Joshua Franco began his career as a bantamweight and had been jumping up and down from two different divisions. He made his pro debut in August 2015 and beat Temoatzin Landeros Castillo through a close split decision. After this dream start in his career, he went down to the super flyweight division and scored stoppage wins against Saul Eduardo Hernandez (third-round TKO in October 2015) and Leonardo Reyes Leon (first-round knockout in December 2015).

Unfortunately, this immaculate run by Franco was snapped when he fought Lucas Fernandez in March 2018 and suffered a ninth-round TKO in their super flyweight bout. “El Professor” instantly returned to the winner’s circle after an outstanding fifth-round knockout of Isao Gonzalo Carranza in June 2018 to receive his first-ever title shot against Oscar Negrete for the North American Boxing Federation Bantamweight Title.

Franco and Negrete’s first meeting occurred in October 2018, and the two fought into a split draw; then, six months later, they had their rematch, this time with the vacant WBA International Bantamweight Title on the line as well. It was yet another close fight, but Franco swayed the judges to give him the split decision victory, thus capturing his inaugural boxing titles. But the rivalry wasn’t over because they clashed one more in August 2019 in a trilogy fight which ended in another split draw.

The result prompted Franco to go down in weight again and fight in the super flyweight division. His comeback fight in the 114-pound weight class was against Jose Alejandro Burgos, where Franco stopped him in the ninth round via TKO. Following this victory was a WBO World Super Flyweight title shot for the San Antonio, Texas, native against Andrew Moloney. Little that “El Professor” know that it would be another rivalry in his career.

They first crossed paths in June 2020, and Franco handily beat Moloney by a unanimous decision to capture the WBA World Super Flyweight Title. Still, five months later, they fought again in a title rematch in November 2020. It resulted in a no-contest due to the accidental headbutt that happened early in the match, which made Moloney unable to continue.

Their last encounter went down in August 2021, and Franco officially closed this chapter by lopsidedly beating Moloney for the second time in three bouts to retain his WBA World Flyweight Title, thus setting up a unification fight with Kazuto Ioka. The American looks to continue his streak and earn bigger fights in 2023 if he successfully wins over his upcoming Japanese opponent.

Kazuto Ioka vs. Joshua Franco: Tale of the Tape and Fight Analysis

The tale of tape presents almost identical numbers with Kazuto Ioka and Joshua Franco standing at 5-foot-5 frame; the latter, however, will enjoy a slight reach advantage with a half-an-inch edge at 67 inches against the former’s 66.5 inches. Ioka comes in as the older fighter at 33 years old and brings a substantially significant amount of experience, while Franco has youth on his side at only 27 years.

Both champions are fighting in their orthodox stance, which is responsible for their impressive record of 29-2 for the Japanese with 51% TKO/KO percentage and 18-1-2 for the American, including a 44% stoppage rate. Despite this similarity in fighting stance, Ioka packs a more complete and well-rounded style that will give Franco trouble during the fight. Additionally, Ioka carries the momentum of a six-fight winning streak.

Among the two, Ioka is the more cerebral boxer who can adjust his strategy in-fight as he is the more well-rounded champion. He has a stiff jab that sends back opponents and helps him set up his combinations. The WBO title-holder can fight on the pocket, on the mid-range, and even on the outside, which puzzles his opposition.

Meanwhile, Franco is more of a pressure fighter known as a volume puncher. He uses this style to make his opponent engage in him through exchanges, and through these exchanges, he finds his angle to land his power shots. The American found success in this approach in his previous fights, but this can also be the primary reason for a defeat at the hands of Ioka.

If Franco brings this style in the WBO/WBA Super Flyweight Unification Title, he’ill be greeted with counterpunches by Ioka that may even make him touch the canvas. The timing and speed of Ioka should be enough to keep him at bay throughout the bout, which will keep him ahead in the judges’ scorecards. Although I did mention that Franco might suffer knockdowns, his durability, heart and grit are sufficient to make it to the final decision.