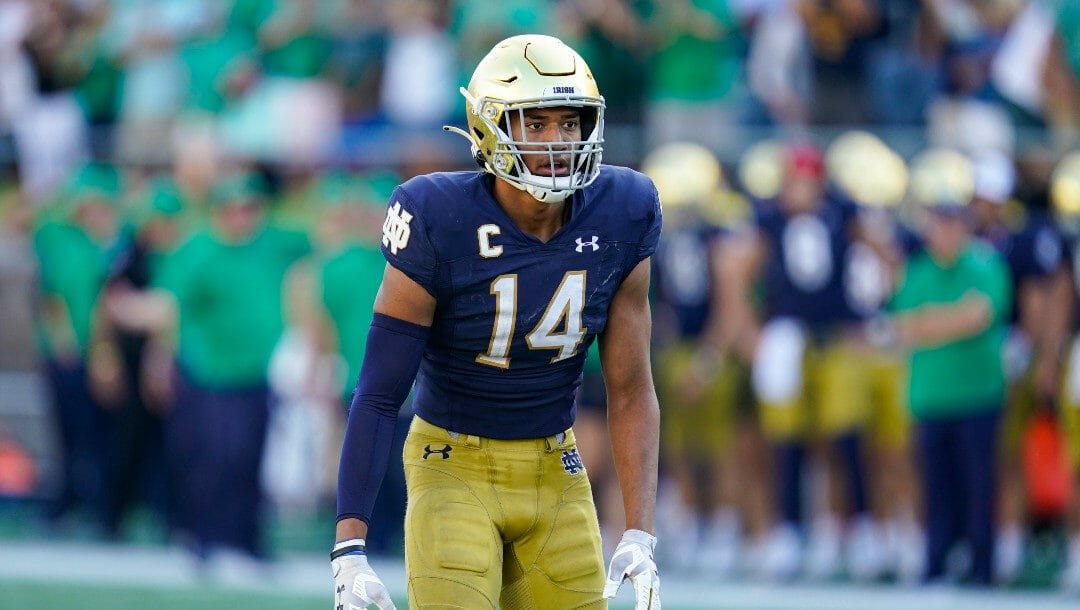 Playing safety, Kyle Hamilton was the furthest defender away from the line of scrimmage. Yet he ended up making the most important impact.

Only a freshman, Hamilton was on the field for a fourth-and-1 play against Navy. The Midshipmen lined up with a full house formation, then sent slotback Tazh Maloy in motion to the right. This was away from Hamilton, who has one of the top odds to be taken first overall in the NFL Draft.

Maloy was a lead blocker for quarterback Malcolm Perry, who kept the ball himself. He seemed to have enough space on the perimeter for a first down. But Hamilton came screaming in and wrapped Perry up well behind the line of scrimmage.

This sort of intuition and range is exactly why Hamilton is being considered a top prospect, despite playing a position that’s been devalued in recent years.

Hamilton is tied for the ninth-best NFL Draft odds to be selected first overall at +10000. Michigan defensive end Aidan Hutchinson has the leading NFL Draft betting odds to be picked first at -200 as of March 9.

The New York Jets seem to be the right place for Hamilton to land, whether that’s at No. 4 or No. 10 (the Jets have both of those picks).

The Jets need help in a lot of areas. That’s especially true on defense, where they were last in DVOA a year ago according to Football Outsiders. Pass defense was the biggest issue, as they were 32nd as well.

There’s a consensus that Notre Dame’s Kyle Hamilton is the best safety in the draft. But I also think he’s the best player, period. pic.twitter.com/KbLBRormnf

The question becomes how the Jets would value the safety position.

They have the 10th pick this year because in July of 2020 they traded All-Pro Jamal Adams to the Seattle Seahawks after he was reportedly frustrated with the progress of a long-term deal.

The Jets should target Hutchinson or Thibodeaux if they fall to No. 4 overall. Pass rushers are increasingly becoming more vital to the success of a team.

But in a scenario where they’re already taken by the Lions and Texans, respectively, Hamilton may provide good value to the team.

He possesses a generational-level skill set that would help the Jets mask their weaknesses in the secondary.

In 2020 as a sophomore, he racked up 63 tackles, 4.5 for loss, with a pick and seven passes defended. He helped his team reach the College Football Playoff semifinals. In that game, he recorded seven tackles, one for loss, and a pass breakup.

In the ACC Championship that year, he accumulated a career-high 10 tackles, with eight in the first half alone, to go with an interception and another pass breakup.

He also was a Freshman All-American after playing in all 13 games and tallying four picks, one returned for a touchdown, and 10 passes defended in 2019.

Hamilton’s instincts are his greatest asset. He also possesses quick reflexes and outstanding acceleration. This allows him to capitalize and make pivotal plays, like picking off tipped passes.

Hamilton is also a disciplined tackler in the open field. He doesn’t often go for eye-popping hits. Instead, he plays sound and focuses on a sure takedown.

This past season, Purdue called an end-around on fourth-and-1. Hamilton saw the tight ends blocking toward the perimeter on the far side and barreled that way. He wrapped up the ball carrier’s feet and brought him down.

At 6-foot-4, 220 pounds, his length, quickness, and savvy allow him to cover a wide area in a small amount of time. He can play in a single-high defense, in the box, or can cover receivers out wide.

He also appeared smooth during field workouts at the NFL Combine. While a mishap led to him running a 4.59-second 40-yard dash, he was second among safeties in the broad jump (10 feet, 11 inches) and third in the vertical (38 inches).

Against Florida State this past season, Hamilton was covering running back Jashaun Corbin deep downfield. Hamilton kept his eyes in the backfield, and when he saw the quarterback scramble to his right, the safety knew to move that way and stayed between the passer and Corbin. He was in position for an interception along the sideline, while managing to keep his feet inbounds.

Hamilton can occasionally be tricked this way. Clever quarterbacks may look another direction and bait Hamilton out of position while actually hoping to throw to another part of the field.

However, Hamilton’s talents are rare, so the Jets may not want to pass up on him.