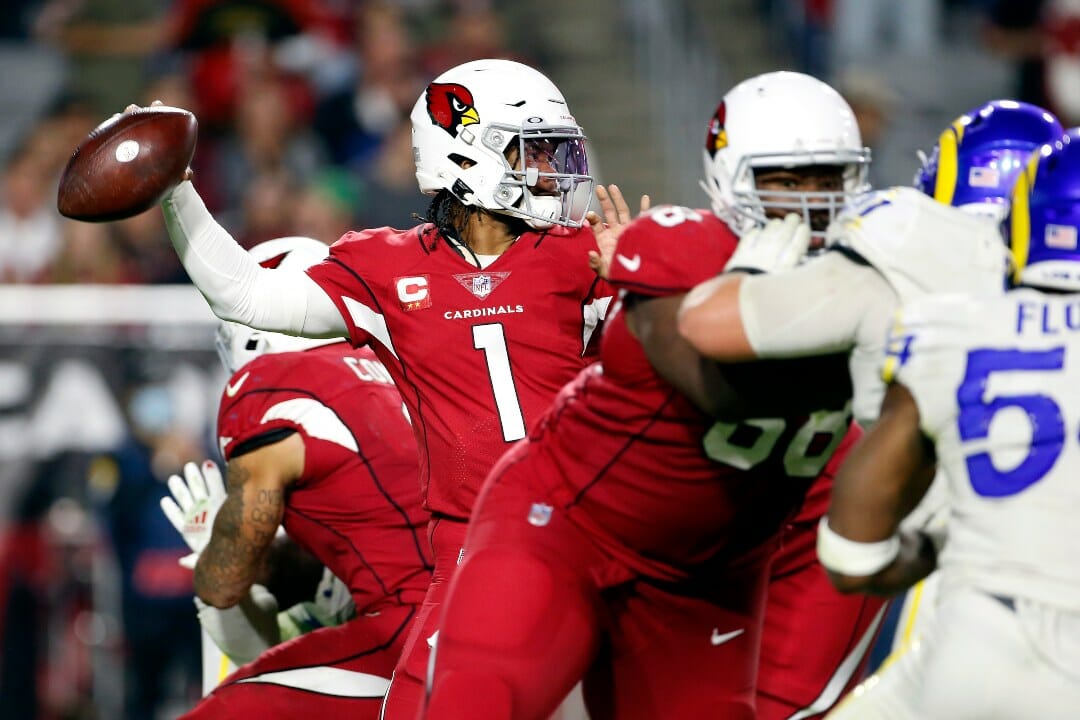 After starting the season on a seven-game win streak, Kyler Murray and the Arizona Cardinals have struggled late in the season, losing four out of their last five games. Can the Cardinals recover to win their first-round playoff game on Monday against the Los Angeles Rams?

Let’s look at the NFL playoff odds and dive deeper into this NFC Wild Card matchup.

This game will be the third time these teams have met this year. In their Week 4 matchup, the Cardinals walked away with a 37-20 win at SoFi Stadium. We saw Murray throw for 268 yards and two touchdowns in that game. He also added 39 yards on the ground.

In the Week 14 contest, the Rams edged out a nail-biter and survived 30-23 in Arizona. Matthew Stafford picked apart the Arizona defense, throwing for three touchdowns. Murray threw for 383 yards and ran for 61 more but threw two interceptions and couldn’t find the endzone through the air or on the ground.

Recently, Murray hasn’t looked like himself. The Cardinals have lost four out of their previous five games, and Murray’s only topped a QBR rating above 47 once. In his nine games before that stretch, he averaged a QBR of 64.9.

To beat Los Angeles, Murry will have to limit mistakes. He recorded a passing touchdown to interception ratio of 17:4 in his first six games. In his last seven games, that ratio was only 7:5.

Getting free of the pocket and using his feet to get into the endzone will also be a key for Murray. In his previous matchups with the Rams this year, Murray ran for a combined 100 yards but could not tally a touchdown.

Keeping the Rams’ defense on their toes and wary of the possibility of a quarterback breakaway run will also open up the passing lanes, allowing Murray to air the ball out safely. If Murray can run effectively, the Rams may need to have a linebacker spy Murray, opening up more medium routes. He threw two picks in his last game versus the Rams, so those cleaner passing lanes should help prevent that from happening again.

Lastly, Murray should focus on getting his playmakers involved. With DeAndre Hopkins not able to suit up for this one, Christian Kirk is the next best option. With Kirk likely being shadowed by superstar CB Jalen Ramsey, I believe that Zach Ertz will find space in the middle of the field.

Ertz has the third-most receiving yards on the team even though he’s only played half of the season in Arizona. If Murray can key in on getting the ball in Ertz’s hands, Ertz should be able to move the ball downfield.

Can Kyler Murray Get His First Playoff Win?

Do you think Kyler Murray and the Cardinals can beat the Rams? I think if Murray can limit his mistakes, he will have a shot at the upset.

Place all of your NFL playoff bets at the best online sportsbook, BetMGM. Sign up for an account today for a risk-free initial bet of up to $1,000.