LA Rams’ Defense Is Perfect Complement to Their Offense 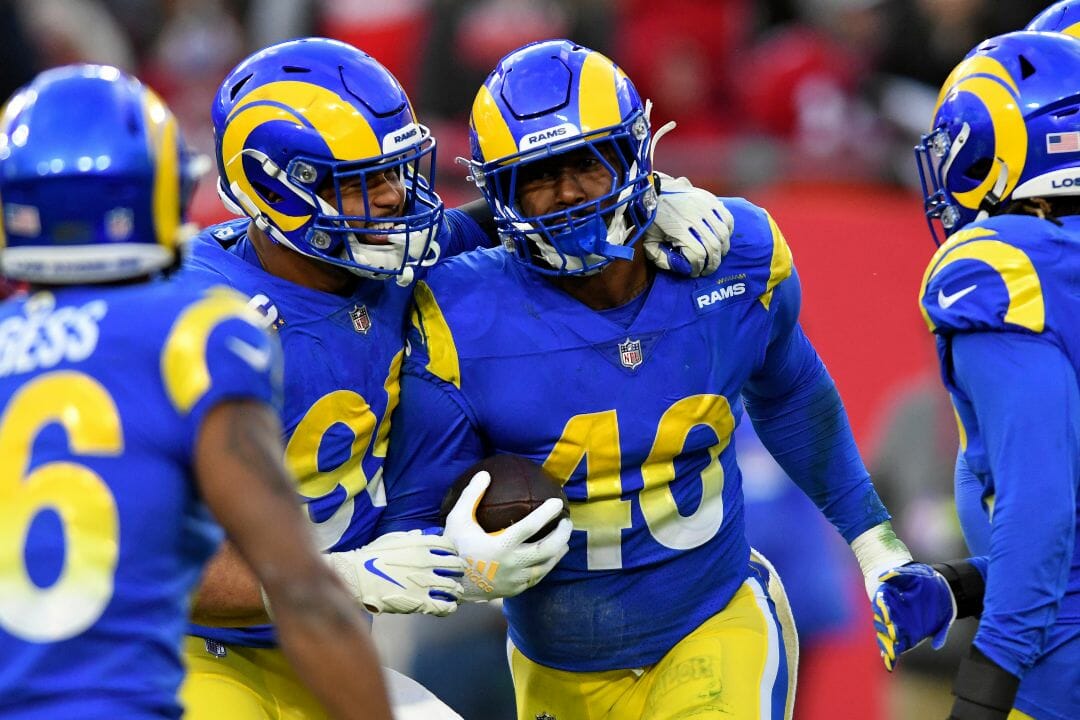 Moving with such force, Aaron Donald plowed ahead as if no one was between him and the quarterback.

The Los Angeles Rams, whose Super Bowl odds are +200, applied pressure on Tom Brady a great deal. Late in the first half last week, Donald did so again.

Tampa Bay offensive linemen Donovan Smith and Ali Marpet put their hands on him. The seven-time All-Pro defensive lineman advanced anyway. Brady succumbed to the pressure, as three Rams were piled on him by the time the whistle blew.

The very next snap, Brady had just as much time to throw. He targeted longtime teammate Rob Gronkowski along the sideline, hoping the tight end would make a play that could keep the Buccaneers on the field.

Instead, defensive back Nick Scott jumped in front and picked it off. In a flash, the Rams were deep in enemy territory. From defensive pressure and takeaways, their offense has benefited.

The Rams’ defense, though Brady had more success in the second half, held the Buccaneers to 27 points. This was below their season average points total of 30. And the Rams could be in line for an even better showing Sunday in the NFC Championship.

While Rams passer Matthew Stafford and wide receiver Cooper Kupp have fueled the offense, the defense has been a dominant force this season. That begins with Donald and their front seven.

“For a guy of his size, his strength and his quickness, that combination is very unique,” Bucs head coach Bruce Arians said. “There have been a lot of great three techniques in different shapes and sizes, and he’s one of the best I’ve seen.”

The Rams are Pro Football Focus’ best-rated defense in the NFL. While they have depth, much of their dominance is derived from their superior talents at every level.

Donald, as ascendant as ever, is rated as PFF’s best defender this season, regardless of position. He’s also the second-rated pass rusher and sixth-ranked run stopper. That’s rare for someone who often lines up as a defensive tackle, as he did on his sack against the Buccaneers.

In that game, he chipped in two tackles for loss, three quarterback hits and a pass defended.

“Keep playing, find a way to get to the quarterback, trying to find ways to affect him in any way we can,” Donald said. “They made their plays, but at the end of the day, we won.”

Nothing to see here. Just a defensive tackle bending the corner around two guys from the opposite hashmark. pic.twitter.com/pIwJAGrm9S

Von Miller, an outside linebacker who was acquired in a midseason trade after a Hall of Fame tenure with the Denver Broncos, has maintained a high level of performance at 32 years old.

He’s tied for ninth according to PFF’s pass-rushing productivity metric. Though he drops into pass coverage on 11% of his snaps, he’s also ranked second in that area. He added a sack and a fumble recovery last week.

“To be in these moments, you can’t blink,” Miller said. “You’ve just got to keep going. My team didn’t blink today.”

Led by All-Pro cornerback Jalen Ramsey, the Rams are also in the top 10 in PFF’s pass coverage grades. Ramsey is seventh individually among the top half of players who drop back.

All of this has melded into a volatile defensive unit that can alter a matchup at any moment. They’ve forced four turnovers in their past two playoff games.

“I thought they put great pressure on (Brady) all day,” Rams head coach Sean McVay said last weekend. “I thought the turnover by Nick Scott was a huge play. You really look at it, we missed some opportunities where the defense did a great job getting the offense short fields.”

This all has given Los Angeles’ offense more opportunities to score. In their two playoff games, the Rams have averaged nearly a 10-minute advantage in possession time.

That’s been critical against quarterbacks like Brady and Kyler Murray of the Arizona Cardinals. And it may be even more so against the 49ers, who heavily rely on a potent rushing attack.

After what could’ve been a heartbreaking loss turned into a triumph, Miller recognized the Rams had to improve in some aspects. The 49ers defeated the Rams twice in NFC West matchups during the regular season, 31-10 in November and 27-24 in overtime to end the regular season.

Donald, though, said his unit is “ready for a dogfight.” And that’s what it may become. But the Rams’ defense will provide a challenging obstacle.

“This is how you would write a book,” Donald said. “You’re at home, playing against a divisional opponent that got the advantage on us the last couple times and now to get to where we want to get to, you’ve got to beat that team. You wouldn’t want it any other way.”