Los Angeles Chargers: How Many Points Can They Score Against the Las Vegas Raiders in Week 18? 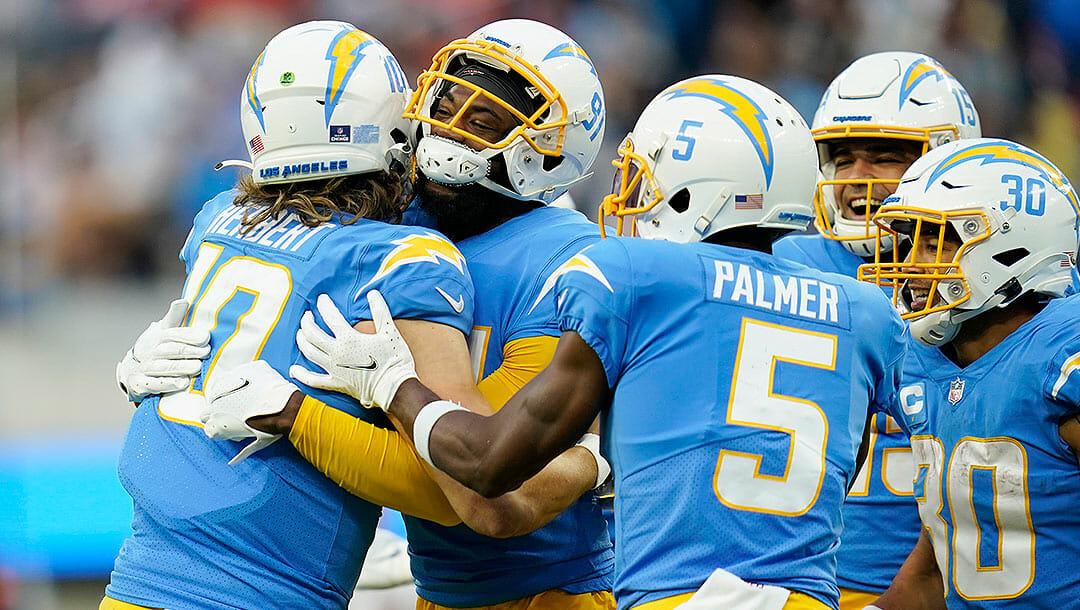 The Los Angeles Chargers will finish their regular season on the road in Week 18 against the Las Vegas Raiders with a chance at the playoffs. Sunday night’s game is like a one-game playoff, as the winner continues while the loser goes home, with a few exceptions. The Raiders can also get in if the Ravens beat Pittsburgh and the Jaguars upset the Colts. Both teams could also get into the postseason if the Jaguars beat Indianapolis and the Chargers and Raiders tie.

NFL odds show the Chargers are a slight favorite. Here’s a closer look at their scoring potential.

The Chargers beat the Raiders 28-14 back in Week 4, which is why they currently sit in the seventh seed, and the Raiders are in eighth.

The Chargers have relied heavily on their passing attack this season, averaging 277.8 yards per game in the air. This season, Herbert’s thrown for 4,631 yards and 35 touchdowns, ranking third in the league for each.

A quarterback can’t do it alone, and the Chargers passing offense is deep at the skill positions. WR Keenan Allen has 100 receptions for 1,086 receiving yards and six touchdowns. TE Jared Cook is another favorite Herbert target, with 44 receptions and four TDs.

RB Austin Ekeler also factors into the Chargers passing game. Aside from his 847 rushing yards, Ekeler’s caught 65 passes for 612 yards and seven TDs.

Given Herbert’s gaudy passing numbers, it’s easy to forget that the Chargers also have an elite running back. Austin Ekeler has 847 yards on the ground and 11 rushing TDs. Those 11 TDs rank him fifth in the league.

Ekeler manages 4.5 yards per rush on the season, but LA’s offense doesn’t play a traditional running style. As stated above, Herbert loves to get Ekeler involved in the passing game, and Ekeler averages 38.25 receiving yards per game. That doesn’t mean he can’t carry the ball when necessary.

The Raiders Defense Is Alive

The Raiders defense ranks tenth in passing yards allowed per game (214.6), and in their previous three games, they’ve averaged below that (142.3). Two of those three games were against the Cleveland Browns and Denver Broncos, two teams that have struggled offensively this year.

Most surprising, however, was their performance against the Indianapolis Colts last week. The Raiders held Colts’ quarterback Carson Wentz to 148 yards and one TD and contained the NFL’s leading rusher, RB Jonathan Taylor, to 108 yards.

While the Raiders defense has shown signs of life in recent weeks, the Chargers scored 34 against a Denver Broncos team allowing 18.2 points per game.

How Will the Los Angeles Chargers’ Offense Fare?

The Los Angeles Chargers need to win this week to maintain their playoff spot. Though the Raiders’ recent defensive play presents challenges, I expect Herbert to connect with his favorite targets, Allen and Ekeler, and put up a decent amount of points.

What do you think? Can the Chargers score enough points to beat the Raiders?

Stop by the BetMGM King of the Weekend promo for your shot at $50,000. You could be eligible if you pick the top six teams with the most points in Week 18. Sign up for an account to make your first deposit.