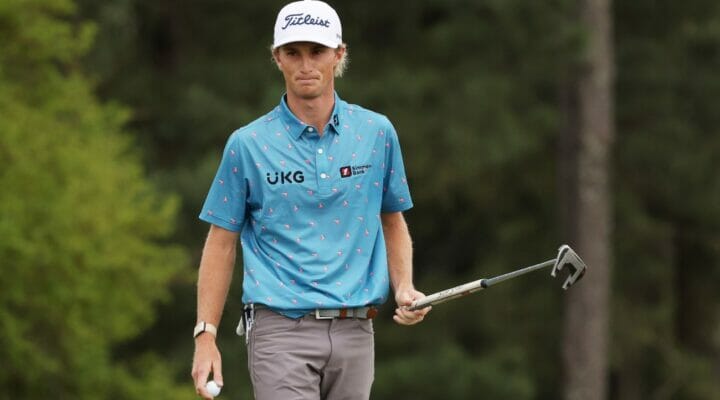 On Thursday night, two hours after Patrick Reed, Daniel Berger, and Paul Casey exited the 18th green to complete the first round of The Masters, Kyle Porter of CBS Sports tweeted, “For 16 straight years, nobody not named Tiger has come from outside the top 10 after Round 1 to win.”

That meant, if the non-Tiger Woods streak reached 17 years, the 2021 Masters champion would be one of the following golfers:

It’s only one piece of selective history. Xander Schauffele almost did it in 2019, as did Rickie Fowler in 2018, and Lee Westwood in 2016. And three days before defeating Westwood in 2016, Danny Willett was tied for ninth (with three other golfers) after the first round.

The subconscious elimination of six golfers was stupid on Thursday night and more stupid on Friday night when four of my six contenders finished the second round well outside the top 10: Lowry (21st), Reed (32nd), Simpson (40), and Kokrak (48).

Will Zalatoris, meanwhile, is one of only two golfers in the field with consecutive rounds of 70 or better (Harman) and enters the weekend one stroke behind Rose. And with the 24-year-old in position to become the first Masters rookie to win a green jacket since Fuzzy Zoeller in 1979, at least my stupidity has company.

The former ACC Player of the Year burst onto the professional scene with a sixth-place finish at Winged Foot last year. Zalatoris entered this weekend with only one professional victory (on the Korn Ferry Tour) and +6600 odds to win The Masters. After an opening-round 70, he was still buried at +4000, double the odds of Webb Simpson (+2000), with whom he was tied in fourth place.

Since 2011, the pre-third-round favorite has won only four times:

“It’s a childhood dream to obviously be in the final group of a major on a weekend, especially here,” Zalatoris said on Friday, 16 years after he attended the 2005 Masters and saw Tiger Woods defeat Chris DiMarco. Woods’ fourth win came three days after an opening-round 74 left him in a tie for 33rd place.

Zalatoris and Rose are scheduled to tee off at 2:20 p.m. ET on Saturday. You can view full Masters odds here.

At BetMGM, you can bet on golf, including the PGA Championship, U.S. Open, and other tournaments. View opportunities for parlays, props, live betting, and more.