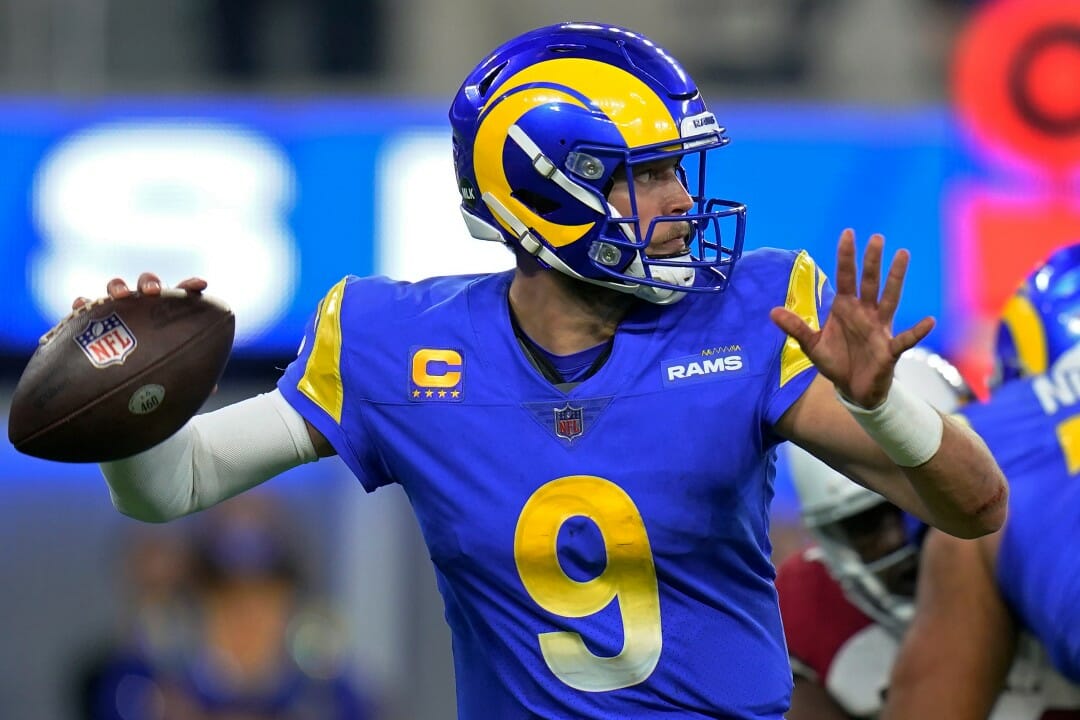 Contemplating all he’s acclimated to, Matthew Stafford smiles. “Just about everything,” he realizes.

Less than a year ago, the Los Angeles Rams quarterback, who has Super Bowl MVP odds of +135, was traded away from Detroit, a place he had played for more than a decade. And while he set franchise records, it was never enough to lift the Lions consistently to success.

So when he discovered he had been traded to the Rams, an organization that’s been the antithesis of the Lions of late, Stafford was eager to join. While appreciative of Detroit, he viewed it as a fresh start with a team that had potential. He didn’t always have that before.

Stafford’s achievements this season equate to validation. Though often injured, he wasn’t the Lions’ issue. Rather, Stafford’s prowess as a pocket passer with a cannon arm was merely lost within the scope of the nation’s attention due his team’s lack of victories.

Time to put some respect on Matthew Stafford pic.twitter.com/NfyfZWZuZy

No more. In his very first season with the Rams, Stafford has fueled them to newfound heights, at least ones in his career. In doing so, he’s solidified his place as one of the best quarterbacks in the NFL.

The Rams have Super Bowl odds of -200 against the Bengals. Their Super Bowl betting line is -4.5.

Stafford hadn’t even won a playoff game before this year. And now he’s favored to lead his team to a championship. That is surely new to him.

“These opportunities are what you play the game for. I’m so lucky to be in this situation and be able to go out and battle one more time with this great group of guys, teammates and coaches,” Stafford said. “As far as pressure goes … pressure is a privilege. That means something is expected out of you. We expect it out of ourselves anyways.”

Stafford being drafted first overall out of Georgia in 2009 signaled a different era for the Lions. He battled to live up to the fanbase’s expectation of him and for his teammates. But it didn’t bear as much team success as hoped.

Stafford and Pro Football Hall of Fame wide receiver Calvin Johnson combined to be one of the most prolific duos in the NFL. Their time together, though, only resulted in two playoff appearances and no postseason victories.

Former teammates like Johnson have expressed their support of Stafford on his run to the Super Bowl. This illustrates the respect he gained, even amongst failed seasons.

“I know I’m a representation of those experiences that I’ve had with those people,” Stafford said. “I feel like every time I step out on the field, I’m playing for not really myself but for everybody that’s helped get me there.”

.@calvinjohnsonjr shares his thoughts on Matthew Stafford and Cooper Kupp as they head into Super Bowl LVI pic.twitter.com/EmooB40TkT

This November, the Rams didn’t win a game. But Stafford had been through stretches like that before. He knew how to respond.

He believes his Lions tenure forced him to learn how to grapple with an array of obstacles. His time there, he added, made him the player he is.

Days away from a Super Bowl, Stafford understands how precious opportunities like these are.

“If we sit here and say we’re not a product of our experiences and we haven’t learned from some of the things that we’ve had go on in the past, we haven’t picked up things from teammates and coaches along the way,” Stafford said, “we would be lying to ourselves.”

Matthew Stafford’s first year in LA has been dominant 🐏 pic.twitter.com/kwRfaSvi4t

Stafford shuffled about 10 yards behind the line of scrimmage, similar to what he may have had to do in Detroit to buy himself time. He unloaded a pass off his back foot out of desperation, another familiar sight for him.

The Rams had compiled a 27-3 lead in the third quarter against the reigning champion Buccaneers in the NFC Divisional Round. But Tom Brady helped his team come back and knot the score, a staple of his legendary career.

So Stafford had another chance to fire back, to definitively prove he was capable of standing up to one of the most clutch players the game had ever seen when his team needed him.

With less than 30 seconds left from the Rams’ 30-yard line, Stafford’s pass landed in Cooper Kupp’s hands at Tampa Bay’s 18. Stafford urgently called for his teammates to rush to the line and stop the clock. He spiked the ball.

Four seconds were left. When the ball bounced back up to his hands, he pounded it into the ground again, this time in exhilaration. The Rams’ made field goal as time expired sent them to the NFC Championship. In the type of moment he had dreamed of since he was a child, Stafford delivered.

“I think Matthew has played his best ball as of late in those biggest moments,” Rams head coach Sean McVay said. “I think guys are playing well around him.”

In a potent offense, Stafford has thrived. He’s sixth in the league by Football Outsiders’ DYAR metric and is fourth in QBR. He’s totaled career highs in yards (5,791) and touchdowns (47). He’s Pro Football Focus’ fourth-highest graded passer in the fourth quarter.

Rams offensive coordinator Kevin O’Connell believes the entire organization has benefited from what Stafford provides. He’s one of them. Los Angeles’ offensive firepower was enough for O’Connell to garner the head job with the Minnesota Vikings.

“He’s done it on a daily basis with the ultra consistency that can come across sometimes as that cool, calm and collected guy. But the best part about it is he’s just being himself and he’s so comfortable in his own skin,” O’Connell said. “He’s so comfortable being Matthew Stafford.

“… He’s also made me a better coach just by being around him so it’s hard for me to really put into words just how he’s impacted our team and myself personally.”

We'd be here all day if we showed every highlight from QB1.

When asked how he remains focused on the moment, Stafford said watching Cincinnati’s defense on tape is enough to demand his attention. Against the Bengals, who have maximized takeaway chances, Stafford said a Rams win would result from limiting those turnovers and mistakes.

Stafford held a virtual press conference earlier this week on his birthday. He wasn’t afforded much time to relish the occasion. He was occupied preparing for a game he will be as excited as ever for.

He feels he’ll have plenty of opportunities to celebrate after the Super Bowl.

“He’s worked so hard,” O’Connell said. “He’s playing really well in the playoffs and has really been our leader throughout the whole season, and we wouldn’t want anyone else leading us out there on Sunday.”