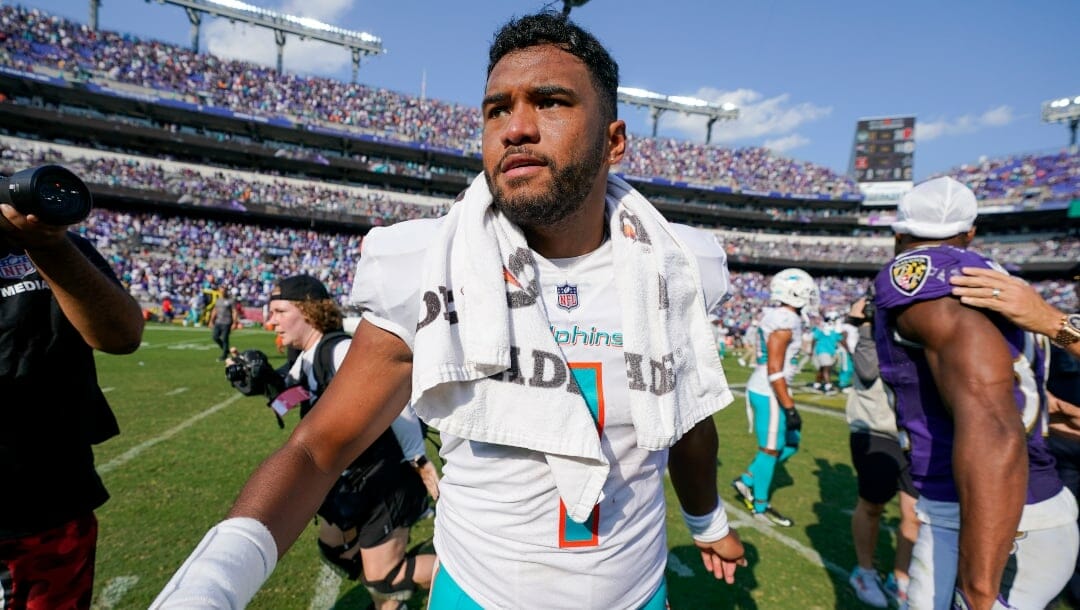 A receiver went in motion as Tua Tagovailoa readied for the snap. Everything was in place.

The Dolphins were football betting favorites against the Patriots, and they were beginning to show why. Miami was up by 10 points and with 24 seconds left in the first half on a fourth and 7 expanded that lead.

After Cedrick Wilson Jr. motioned, he was stacked up next to Jaylen Waddle to Tagovailoa’s right. This forced a Patriots defensive back who was a few yards off the line of scrimmage to cover Waddle.

That was a mistake for New England. It was the space Waddle needed.

The ball was out of Tagovailoa’s hands in about one second. After Waddle had found a soft spot in the defense on a slant and outran every other defender, he was in the end zone about six seconds after the snap.

In the two seasons ensuing Tagovailoa being selected fifth overall in the 2020 NFL Draft, his lackluster performances gave reason to doubt whether he’s a long-term solution for the franchise behind center.

But this year, the Dolphins know who they are. They know Tagovailoa’s strengths. And more than ever, they know how to take advantage to concoct a winning offensive formula.

Week 1 against New England wasn’t even Tagovailoa’s best performance of the season.

When facing a 21-point deficit in the fourth quarter last week against the Ravens, the third-year quarterback out of Alabama threw four touchdown passes in the final frame alone. He finished the contest 36 of 50 (72%) for 469 yards, six touchdowns and two interceptions at Baltimore.

On the season, Tagovailoa’s thrown for 739 yards, seven touchdowns and two picks with a 71.1% completion percentage. At this rate, he would throw for 6,282 yards and 60 touchdowns, which would both shatter the previous NFL single-season records.

Those numbers are highly unlikely to be sustainable. However, these first two games are indicative of a quarterback who has improved in a new offensive system with excellent weapons around him.

Tagovailoa’s success isn’t only because of him. First-year Dolphins head coach Mike McDaniel created an offense where he can succeed.

It starts up front. In Week 1, he was 17th in Football Outsiders’ DYAR metric. He’s third after two weeks.

The difference for Tagovailoa is when he’s not under pressure. He was the second-highest graded quarterback by Pro Football Focus when he was kept clean last week, as 397 of his yards and five of his touchdowns occurred in those situations.

Tagovailoa’s average depth of target, 8.2 yards, was 13th in the league when he had a clean pocket. He was 23rd at 5.9 yards when under pressure.

The Dolphins are ninth in adjusted sack rate after two weeks. They were 19th in 2021.

Of Tagovailoa’s eight dropbacks when he was under pressure, none were his fault. That’s a credit to him. He was elusive in the pocket consistently, even spinning away from defenders, all while keeping his eyes downfield most of the time.

When Tagovailoa has a clean pocket, he attacks downfield much more effectively.

Tagovailoa was the highest-graded quarterback by PFF in Week 2. While he was first for passes behind the line of scrimmage, he was also graded third for passes 20 yards down the field or more. It marked the first game of his career with multiple deep touchdown passes.

McDaniel’s playbook includes a mix of screens, slants and other quick passes as well as deep shots. So far, Tagovailoa’s converted on all different types of play calls.

Tagovailoa was sixth in average completed air yards (7.1) last week. In 2021, he was 29th (5.1). Simply, he is throwing downfield more often and is enjoying more success.

Tagovailoa’s throw chart from last week is a great illustration of how much the Dolphins wanted to go downfield.

McDaniel should be credited for designing an offense that utilizes Tagovailoa’s strengths and for leading the team to a substantial amount of offseason improvement.

Tagovailoa’s weapons are aiding him quite a bit.

Four of Tagovailoa’s touchdowns occurred on dropbacks that lasted 2.5 seconds or more. But he had a higher PFF grade (second) on throws in 2.5 seconds or less.

That means that Tagovailoa was better when the ball was out of his hands quicker. And that makes sense considering the speed the Dolphins have on the outside.

Tyreek Hill and Waddle are two of the fastest receivers in the NFL. So the Dolphins have devised ways in which they can use that speed in the open field.

Hill averages 4 yards of separation from the nearest defender at the time of catch or incompletion, and Waddle averages 3 yards according to Next Gen Stats.

That cushion makes things easier for Tagovailoa. He was first in the league in aggressiveness last season, meaning he was forcing throws into tight windows.

In Week 2, he was 26th in aggressiveness. That’s in part because he has more of a margin for error.

Hill and Waddle have been viable targets for Tagovailoa down the field, not just on rapid throws to the perimeter. Just over 77% of the team’s air yards have gone to those two.

Tagovailoa is playing exceptionally well. But his coaching staff and the elevated play of those around him hasn’t hurt.

Tagovailoa will face perhaps the toughest test he will all season this week against the Super Bowl-favorite Bills. The Dolphins have an NFL betting line of +5.5.

The Bills are first in the league in adjusted sack rate, and that’s while hardly blitzing in their first two games. They’re also first in total defensive DVOA and second in pass DVOA.

Placing a bet online a fantastic way to get closer to NFL action each week.

From futures like NFL MVP odds or win totals to weekly odds like spreads, over/under totals, and moneylines, there are opportunities for everyone to take their football entertainment to the next level.

Visit the sportsbook today to bet on NFL odds!