World Series Dreams: Is This the Best Yankees Team Ever? 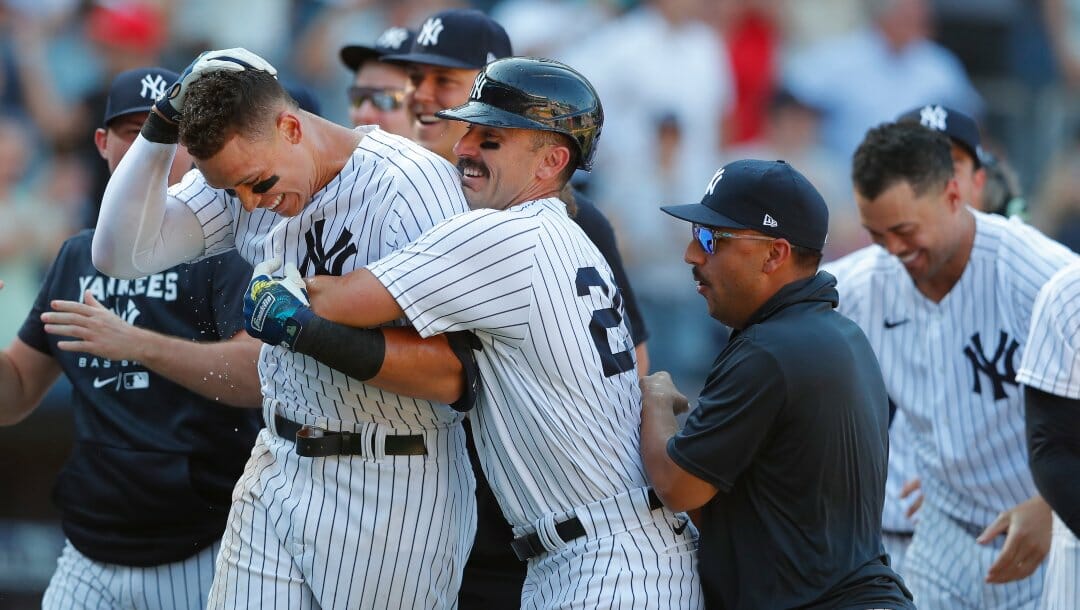 There’s no denying the New York Yankees are having a hell of a season. Going into the All-Star Break, the team leads the AL East baseball standings with an incredible 64-28 record, and are the current favorites to win it all in the postseason with World Series odds of +325.

It was clear we were watching something special after just 76 games when the Yankees already had a run differential of +151, surpassing any team in franchise history. Now, after 92 games, the team’s run differential has climbed to +199 and shows no sign of slowing down.

The impressive stats don’t end there, either — the Yankees currently lead the league with 497 runs, 157 home runs, and 472 RBI. Center fielder Aaron Judge is also leading the league with his own incredible numbers, including having gone yard 33 times before the All-Star Break, tying Roger Maris (1961) for the most of any Yankee.

Not only could the 2022 team be the best in Yankees franchise history, but they are also contenders to be the best in the history of Major League Baseball.

They are currently on pace to tie, if not beat, the storied 1906 Chicago Cubs and 2001 Seattle Mariners with 116 wins in the regular season. In fact, even taking out 124 games to beat the 1906 Cubs’ .763 winning percentage is not out of the question. We may be watching history in the making right now.

A lot can still happen with almost half a season left to play. Despite their incredible run differential, the Yankees’ winning percentage sits at .696 going into the All-Star Break, which is just short of the records of the 1998 (.753) and 1939 (.707) Yankees at the same time of the season.

So are the 2022 Yankees on the verge of cementing a historic season? There are a few teams in franchise history that will take a lot to beat.

They may not have won the most games of all Yankees teams, but they are widely considered to be the greatest team in franchise history, if not the MLB. The 1927 team had a 110-44 record in the regular season with a run differential of +376, and the pitching staff led the league with a 3.20 ERA. The Yankees went on to sweep the Pittsburgh Pirates 4-0 in the postseason to win the World Series. They were one hell of a team.

Currently holding the Yankees record for the most regular-season wins, the 1998 team won an amazing 114 games during their reign, though it should be noted they did play eight more games than in 1927.

With a run differential of +309 and a team ERA of 3.86, the 1998 Yankees stormed into the postseason and eventually swept the San Diego Padres in the World Series. The team’s roster included Derek Jeter, Bernie Williams, Tino Martinez, Paul O’Neill, David Wells, Mariano Rivera, and a seemingly endless array of other celebrated players, so it’s no wonder they were unstoppable.

Following 106 wins in the regular season, the 1939 Yankees swept the Cincinnati Reds 4-0 to win the World Series in a very dramatic fashion. The team had a truly insane run differential of +411, which is still the largest in baseball history.

The 1939 Yankees included future Hall of Famers Joe DiMaggio, Joe Gordon, Bill Dickey, Red Ruffing, and Lefty Gomez, so their impressive stats make a lot of sense. On offense, the team slashed .287/.374/.451 in the regular season, and the pitching staff’s 3.31 ERA kept the defense going as well.

If you’ve got Mickey Mantle, Yogi Berra, Roger Maris, and Whitey Ford all on the same team, you’re going to have a big season. With a record of 109-53 in the regular season, the 1961 Yankees were a force to be reckoned with.

With a run differential of +215 and a team ERA of 3.46, it’s clear the roster was very solid. Roger Maris hit 61 home runs in the season to surpass the previous record of 60 set by Babe Ruth in 1927, adding yet another reason why the 1961 Yankees were a history-making team.

With the @baseballhall Golden Era Committee meeting Sunday, it’s a great time to recognize the career of 2x AL MVP Roger Maris, still the AL’s all-time single-season HR leader w/ 61 in 1961. He played in 5 WS w/NYY, winning two, and his No. 9 was retired by NYY in 1984. pic.twitter.com/7GSAf3A13K

Looking to add more excitement to your MLB betting experience? Live betting is your ticket.

From April through October, you can place live bets on regular-season and postseason games. Perhaps you want to bet on the Chicago White Sox run line as the hold a one-run lead over the New York Yankees in the second inning, the over/under total in the sixth inning of a scoreless game between the Detroit Tigers and Colorado Rockies, or the Chicago Cubs’ moneyline as they trail the Seattle Mariners in the first inning.

Visit the online sportsbook to get started!