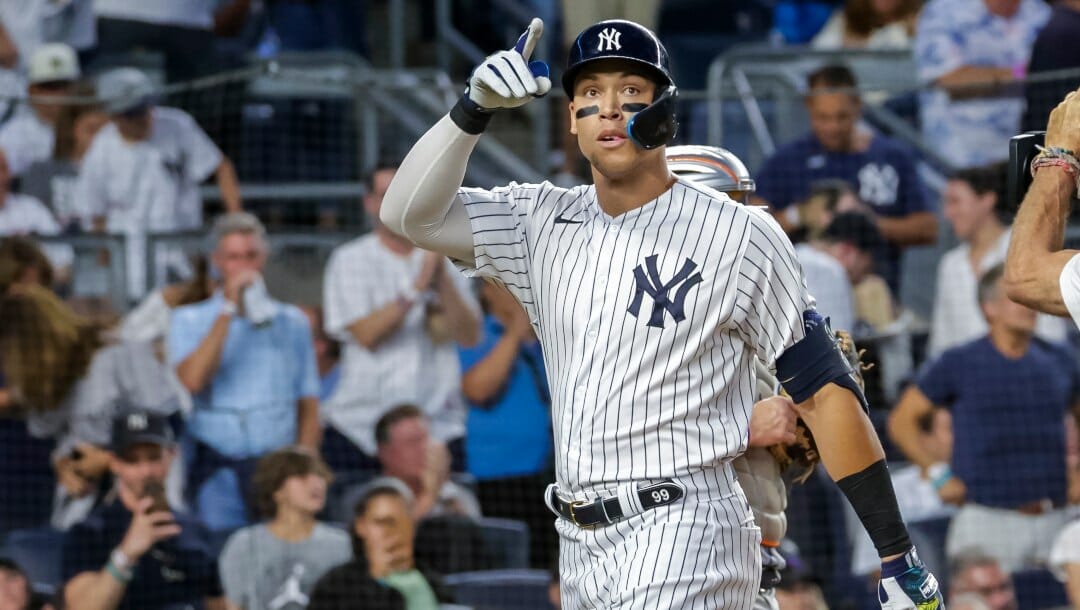 Aaron Judge is having the best year of his career right now and may even be hitting his way into the history books, so it’s difficult to fathom that the New York Yankees wouldn’t do everything they can to keep the star outfielder on their team.

Judge turned down the Yankees’ seven-year, $213.5 million extension during spring training, and now that MLB World Series odds have seemingly stolen the focus of every conversation, we haven’t really heard much about his contract since. Will the team make another offer? Does he even want to stay in New York?

There are a lot of unanswered questions, but if Judge doesn’t sign an extension with the Yankees, he will enter free agency at the end of the 2022 season, and one thing is certain — there will be no shortage of teams who want him.

Judge has AL MVP odds of -500, and somehow that isn’t even the biggest indicator of his incredibly impressive season.

Having gone yard 48 times this season, he’s contending to beat Roger Maris’ 1961 record for the most home runs hit by a Yankee (61) or even Barry Bonds’ 2001 all-time MLB record (73, though rumor has it, he had a little injectable assistance).

So, where could Judge end up after the 2022 season?

The obvious team for Aaron Judge to play for next year is the Yankees, assuming they offer another contract extension more to the star right fielder’s liking.

New York is leading the AL East with a record of 76-48 and World Series odds of +450, the third best odds in the league behind the Los Angeles Dodgers and Houston Astros. A recent losing streak has wrecked what was looking like a very impressive season, but the team is still well ahead of their division and almost certain to play in October.

If the Yankees think Judge wasn’t a massive part of their success this year, and indeed previous years, they’re kidding themselves.

To be blunt, if New York doesn’t want to pay him what he wants or arguably deserves, plenty of other teams will.

"The money, the contract has never been why I play this game. I want to play for the Yankees and be here for a long time. If it works out, it works out – if it doesn't, it doesn't."

Aaron Judge with his feelings on extension talks: pic.twitter.com/66i62eWLPj

The Dodgers like to be on every big player’s radar, and if a high-caliber star like Judge is on the market, they’ll make sure they’re at least in the conversation.

Having said that, the Dodgers already have a star in right field — Mookie Betts. Unless they want to push either Betts or Judge into center or left field, the money on a mega deal could probably be better spent on the pitching staff.

I love a little bit of drama, and Judge moving to the Yankees’ rival team would undoubtedly give us that.

The Red Sox have a range of other player contract concerns to manage this offseason, with Xander Bogaerts and Rafael Devers both deserving long-term deals they haven’t yet been offered, but could Judge be Boston’s next big move?

It’d be entertaining to watch the All-Star go yard over the Green Monster at Fenway every other game.

A controversial move for sure, but perhaps Judge could find himself switching teams but not cities.

Mets owner Steve Cohen is famous for not being particularly concerned about exceeding the luxury tax threshold (the team’s $260 million payroll this season is 75.2% higher than the league average), and he would definitely be interested in acquiring Judge.

After a terrible season resulting in them firing their manager, the Rangers are looking to get back into contention next year. The team acquired Marcus Semien and Corey Seager last offseason, proving they aren’t afraid to spend big on payroll, so could Judge be their next move to bolster the roster?

SEMIEN SENDS IT OUT.

Marcus Semien gets his 18th HR of the year to tie the game up at 1!@Rangers | #StraightUpTX | 📺: BSSW pic.twitter.com/vDCVLHLylo

Lord knows the White Sox need an outfielder — they’ve been playing first basemen out there all season to minimal success, and sooner or later, they’ll simply have to acquire someone who actually knows what they’re doing.

The only thing that makes a Chicago deal unlikely for Judge is how much he’ll cost. The White Sox aren’t known for being aggressive buyers or signing mega-deals; they’re quite famously frugal regarding their payroll and acquisitions. Judge isn’t going to come cheap, and I doubt the White Sox will be prepared to write the checks.

Judge’s hometown team surely holds a place in his heart, but is San Francisco really a franchise he’d want to play for?

The Giants have plenty of money to spend on payroll after only really splurging on pitcher Carlos Rodón during last year’s offseason, but with a lot of rebuilding still to do, it would mean Judge has to resign himself to a rather average team record for at least the next few years.

The Giants tried to get Giancarlo Stanton back in 2017 before he signed with the Yankees and then went after Bryce Harper in 2018 before he went to the Phillies — perhaps Judge is their next big target.

I do have trouble believing Judge would want to go anywhere that isn’t a contender, though.

Only time will tell.