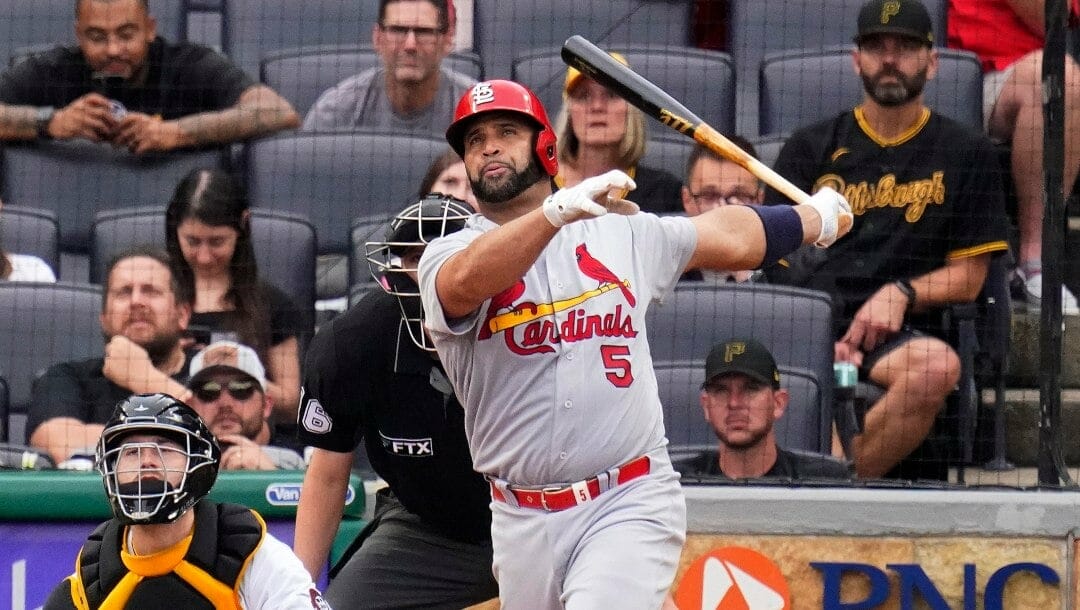 St. Louis Cardinals first baseman Albert Pujols went yard against the Cincinnati Reds on Friday night, bringing his career home run count to an incredible 698 over 22 seasons. With just 14 games left in the regular season, fans are waiting with bated breath to see if the 11-time All-Star can make it to 700 homers before he retires at the end of the year.

Pujols is already ranked fourth on the all-time career home run list, only behind Barry Bonds (762), Hank Aaron (755), and Babe Ruth (714). Even with St. Louis poised for a playoff berth — as of Sept. 20, the Cardinals are leading the NL Central with an 87-61 record and have World Series odds of +1800 — Pujols is unlikely to catch Ruth to take third place.

Still, the 700 mark would be a pretty impressive way to enter retirement.

After 22 years in the big leagues and three seasons as the oldest active player, Pujols announced in March he would retire at the end of 2022. A three-time National League MVP and six-time Silver Slugger, the first baseman is one of only three players in MLB history to have topped 2,200 RBIs in his career and is widely considered by fans and players to be a lock for the Hall of Fame as soon as he becomes eligible.

ALBERT PUJOLS HAS THE 4TH MOST HOME RUNS IN HISTORY! pic.twitter.com/rRB4SNqOZa

So, who are the current leaders for most career home runs?

Although all of Bonds’ records are now shrouded in controversy due to reports he had a little injectable help to achieve them, he is still listed as having the most career home runs in MLB history. Bonds racked up 762 homers in his 22-year career, including 73 in 2001, the most ever hit in a single season.

Despite his long list of enduring MLB records, Bonds didn’t receive the 75% of the vote needed to be elected to the Baseball Hall of Fame during his 10 years of eligibility, with some voters saying they didn’t elect him due to his link to performance-enhancing drugs.

Bonds would go on to finish with 762 for his career 🔥 #BlackHistoryMonth #LetBarryIn pic.twitter.com/VJgkzaTYsd

Before being broken by Aaron, Ruth held the record for most career home runs (714) for 39 years after his retirement in 1935.

Along with an endless list of other accomplishments, Ruth broke the record for most home runs hit in a single season in 1919, going yard 29 times. The power hitter broke his own record numerous times over the years that followed, with his 60 home runs in 1927 still sitting as the eighth-highest single-season record.

In 1936, Ruth was elected into the Baseball Hall of Fame as one of its “first five” inaugural members, alongside Ty Cobb, Honus Wagner, Christy Mathewson, and Walter Johnson.