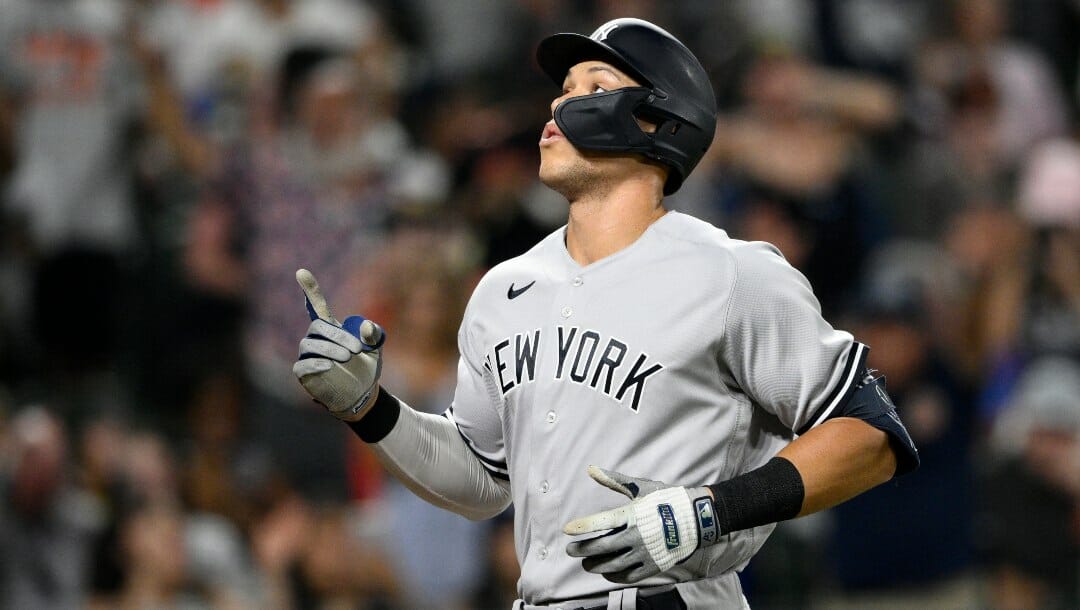 The AL is loaded with talent, as evidenced by the lengthy MVP futures board in updated MLB odds at BetMGM.

Dual-threat Shohei Ohtani is the reigning MVP, and it will take a special season from one of the other contenders to knock him off his perch. Still, there are a number of candidates who continue to put up generational numbers, including favorite Aaron Judge.

We’re running through the top candidates to take home the award.

The New York Yankees slugger swatted three more long balls this week, sending his season-long total to 60 and leaving him two short of a new team record. Consequently, his slugging percentage soared, finishing the week with a 1.167 mark, the highest in the majors.

This week:  The Yankees are locked in AL East matchups this week, hosting the Boston Red Sox for a weekend set before heading north of the border for a set against the Toronto Blue Jays. Clinching the home run record at home against the Red Sox would be a good look, but there’s not much more Judge can do to solidify his grip on the MVP.

Last week:  Shohei Ohtani deserves some credit for the end of the season that he’s having.

The reigning MVP put up a 1.111 on-base plus slugging percentage this week, with three of his eight hits going for extra bases. Still, his season-long OPS is .895, well short of Judge’s 1.125 mark. Ohtani’s pitching metrics leave him in the running for the AL Cy Young award. He threw 7.0 shutout innings of three-hit ball against the Seattle Mariners, dropping his earned run average to 2.43.

This week:  Kudos to Ohtani for the strong finish, but the MVP is Judge’s this season. The dual-threat has an unobstructed path to the end of the season, helping him pad his stats and securing his position as the second-best player in the American League this season. Once he gets through the weekend set against the Minnesota Twins, he and his Los Angeles Angels teammates conclude the season with series against the Oakland Athletics and Texas Rangers.

Last week:  Mike Trout’s reputation is the only thing keeping him on the MVP board this season.

He had another forgettable week, posting a laughable .449 on-base plus slugging percentage with double the amount of strikeouts (6) than hits (3). With the lingering effects of a back injury potentially limiting his effectiveness, baseball enthusiasts are left hoping that Trout has a bounce-back effort in him for next year.

This week:  The Angels are on the road over the weekend before heading home for consecutive series. That’s good news for Trout, who has some pronounced home/road splits this season. Trout has a 1.146 on-base plus slugging percentage in his friendly confines, dropping to .813 on the road. He may have a few fireworks left in him this season, the glimmer of hope the Angels are left clinging to.

Last week:  Toronto Blue Jays first baseman Vladimir Guerrero Jr. is leading the charge, with the Jays on the verge of clinching their second postseason berth in three years. Vladdy ended the week with six hits, including two home runs and one double, for a .619 slugging percentage. He remains a fixture at the top of the Blue Jays lineup and will surely be in the running for future MVP awards.

This week:  The Blue Jays playoff seeding could come down to their weekend set against the Tampa Bay Rays. Currently, Toronto has a 1.0-game lead over their division rivals for the top Wild Card spot. However, with three games against the Rays on the docket, whoever wins this series puts themselves in the driver’s seat for home-field advantage in the first round of the playoffs.

Last week:  The Red Sox’s season mercifully ends in a couple of weeks, concluding another disappointing campaign. Their performance has nothing to do with Rafael Devers’s effort this season, with the third baseman leading the team in most offensive categories. Devers elevated his performance over the past seven days, knocking in five runs and posting a .963 on-base plus slugging percentage.

This week:  Devers will almost single-handedly carry the Red Sox to the finish line, wrapping up their series with the Yankees before traveling home for a date with the Baltimore Orioles. Only a handful of games are left, leaving Devers short on runway to match some of his career-best numbers. Nevertheless, he remains an integral part of the Red Sox lineup.