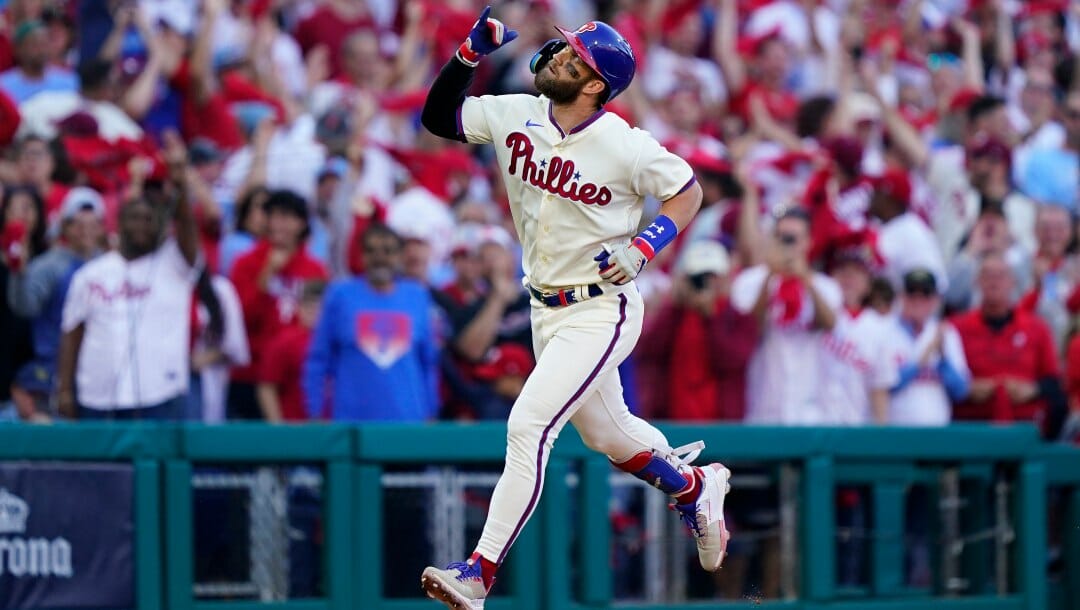 And then there were two.

The first three rounds of the playoffs have been extremely competitive and, at times, controversial as fans and players adapt to the new expanded format, but we’re now down to the final stand — the World Series.

With only the Houston Astros and Philadelphia Phillies remaining in contention to win it all, the most exciting event on the baseball calendar starts Friday, Oct. 28, in Houston.

The World Series will be a best-of-seven matchup split between Minute Maid Park in Houston (Games 1, 2, 6, and 7) and Citizens Bank Park in Philadelphia (Games 3, 4, and 5). The Astros have home-field advantage due to their regular-season record (106-56), which was much better than that of the Phillies (87-75).

When Boosie starts playing, you best not miss. pic.twitter.com/v6R2QPTeao

I predict the Astros will win the World Series against the Phillies in six games.

This is the Astros’ fourth World Series appearance in six years, though they’ve only taken the title once. Considering their 2017 victory is now shrouded in controversy after the team’s cheating scandal rocked Major League Baseball, this is yet another chance for Houston to win it all and prove they don’t need to bang on a trash can to be the best — and they appear to be on the right path.

In the ALCS, the Astros beat the New York Yankees in four games, scoring 4-2, 3-2, 5-0, and 6-5 victories in the first, second, third, and fourth games, respectively. This impressive series rout came immediately after the team swept the Seattle Mariners in the Division Series, meaning the Astros are still undefeated in the 2022 postseason.

First baseman Yuli Gurriel and center fielder Chas McCormick have also each hit two home runs during this season’s playoff berth, so when the Astros get up to the plate, you’re very likely to see a dinger.

As strong as the Astros’ offense has proven to be, their pitching is arguably even stronger.

Justin Verlander, the team’s ace, came back this season after two years away to receive and recover from Tommy John surgery, but you’d never know it from his performance. In 28 regular-season games, Verlander posted an ERA of 1.75 with 185 strikeouts. Although his outing against the Seattle Mariners in the Division Series was less than perfect, he came back strong in the ALCS, recording 11 strikeouts in six innings against the Yankees.

Not far behind Verlander, Framber Valdez recorded an ERA of 2.82 and WHIP of 1.16 with 194 strikeouts through the regular season. The left-hander started Game 2 of the Division Series against the Mariners and Game 2 of the ALCS against the Yankees, recording six and nine strikeouts in the two outings, respectively.

Cristian Javier recorded the same number of strikeouts as Valdez in the regular season (194), though the right-hander had a slightly lower ERA of 2.54. Javier pitched as a reliever in Game 1 of the Division Series against the Mariners, recording two strikeouts and allowing one home run in 1.1 innings pitched. He started Game 3 of the ALCS against the Yankees, recording five strikeouts and allowing no runs in five innings pitched.

The Astros’ starting rotation is rounded out by Lance McCullers Jr. (2.27 ERA), Luis Garcia (3.72 ERA), and Jose Urquidy (3.94 ERA), though Urquidy is yet to make a postseason appearance in 2022. Through the regular season, McCullers Jr. recorded 50 strikeouts in eight games, Garcia recorded 157 in 28 games, and Urquidy recorded 134 in 29 games (28 starts), so the rotation doesn’t have a weak starter among them.

On the other side of the field, and unquestionably the most underestimated team of the postseason, the Phillies have been on one hell of a mission and are showing no signs of slowing down.

You wouldn’t know it from their recent success, but the Phillies had a rather turbulent regular season. The team fired their manager Joe Girardi in June after they started the year with an underwhelming record of 22-29. It was a dramatic change to turn the season around — and it clearly worked.

Bench coach Rob Thomson stepped up as interim manager and immediately led the team to win 14 of their next 16 games. The Phillies finished the regular season 87-75, ranking third in the NL Central behind the Atlanta Braves and New York Mets, both of whom were eliminated before the NLCS.

Philadelphia was the underdog going into all three rounds of the playoffs, but alas, they’re still standing very tall. After sweeping the St. Louis Cardinals in two games in the Wild Card Series, the Phillies beat the heavily-favored Atlanta Braves in the Division Series, recording 7-6, 9-1, and 8-3 victories in the first, third, and fourth games, respectively.

In the NL Championship Series, the Phillies were once again the underdog, but that didn’t stop them from beating the San Diego Padres in five games, scoring 2-0, 4-2, 10-6, and 4-3 wins in the first, third, fourth, and fifth games, respectively.

Moving through the playoff rounds with relative ease, it’s abundantly clear that the Phillies are a force to be reckoned with and can’t be discounted as an easy team to beat in the World Series.

Between designated hitter Bryce Harper, first baseman Rhys Hoskins, and left fielder Kyle Schwarber, the Phillies lineup has not been afraid to hit a homer this postseason.

Harper and Hoskins have each gone yard five times and Schwarber has knocked four out of the park — in fact, Schwarber’s home run in Game 1 of the NLCS flew an incredible 488 feet, making it both the longest home run ever at Petco Park and by a Phillies player.

The Phillies’ defense is equally fierce.

The team’s starting rotation for the World Series will likely be announced on a game-to-game basis, though the Division Series and NLCS rotations can offer a reasonably reliable guide to which pitchers the team will be utilizing.

Against the Padres, the starting rotation was Zack Wheeler, Aaron Nola, Ranger Suárez, and Bailey Falter. However, Kyle Gibson, Noah Syndergaard, and Zach Eflin are all ready and willing to take the mound at the World Series.

Largely considered the Phillies’ ace, Nola had an ERA of 3.25 and WHIP of 0.96, with an incredible 235 strikeouts during the regular season. The right-handed starter struck out six batters in each of his Wild Card Series and Division Series starts, recording a win in both games. His ALCS start against the Padres was less than perfect, as he allowed six earned runs in 4.2 innings pitched, but he still managed to strikeout six batters.

Announced as the NL Pitcher of the Month for May, Wheeler recorded an ERA of 2.82 and WHIP of 1.04 with 163 strikeouts in the regular season. In his Division Series start against the Atlanta Braves, the right-hander struck out five batters in six innings pitched, and against the Padres in the NLCS, he struck out eight in seven innings pitched in his first game, and eight in six innings in his second game.

Suárez hasn’t been as reliable on the mound in 2022 as he was in previous years, but that doesn’t mean he hasn’t been fierce. In the regular season, Suárez had an ERA of 3.65 with a WHIP of 1.33 to go along with 129 strikeouts. He recorded five strikeouts in his Division Series start against the Braves before managing three against the Padres in Game 3 of the NLDS.

The most recent addition to the Phillies’ rotation, Syndergaard, was acquired from the Los Angeles Angels at the MLB Trade Deadline. During the regular season, the right-hander started nine games for the Phillies after 15 for the Angels, accumulating an ERA of 3.94 with 95 strikeouts.

Syndergaard pitched one inning as a reliever against the Braves in Game 2 of the Division Series before starting in Game 4, and recorded three strikeouts in three innings. He also appeared for one inning in Game 4 of the NLCS against the Padres.

"The Phillies just got that dawg in them today."

The Phillies’ starting rotation is rounded out by Falter (3.86 ERA) and Eflin (4.04 ERA), both of whom are undeniably fierce on the mound. Gibson (5.05 ERA) is also available, though he is the weakest of the bunch and is likely to stay in the bullpen for the series, as he did for the NLCS.

Throughout the regular season, the Phillies and Astros met for one three-game series in Houston, and the Astros won two games. The Phillies only managed one win, which is decent considering the Astros had home-field advantage. This also proves it will be a highly contested matchup, and even though I’m putting my weight behind the Astros, I can see this series being close.

At the end of the day, the Astros have proven themselves to be a more reliable, consistent, and fine-tuned team than the Phillies. Their regular-season record ranked them first in the AL and they are undefeated in the postseason. The Phillies have had an undeniably strong run, but I just don’t think they will be able to knock over the Astros.

Both teams are going into the World Series extremely hungry and ready to compete. The Astros want to clinch the title after losing their last two shots at it, and the Phillies haven’t been to the World Series since 2009. Neither team is going to roll over and make this easy. This is a competitive matchup, which will make for a great series.