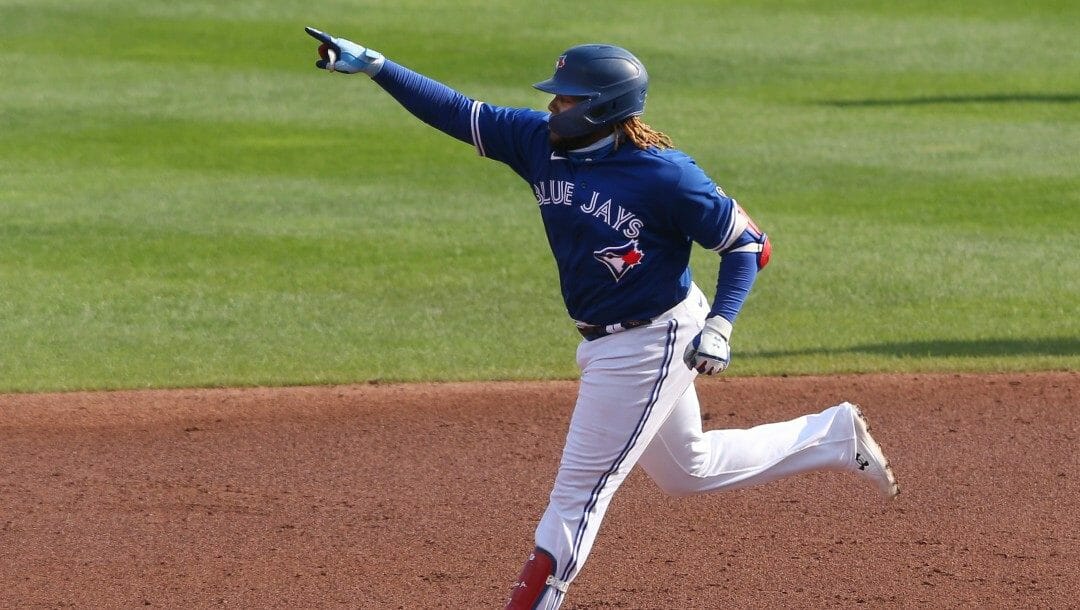 One of the most exciting teams in MLB betting is the Toronto Blue Jays.

They enter the 2022 season with sky-high expectations. Penciled in by many as World Series contenders (MLB odds of +900), which individual players could walk away with some potential individual hardware?

Here are some player props for the coming year that could be appealing.

It might have taken a little longer than some anticipated, but Vladimir Guerrero Jr. truly put it all together in 2021, breaking out to the tune of a .311 batting average to go along with 48 home runs and 111 RBIs, while finishing runner-up to eventual AL MVP Shohei Ohtani of the Los Angeles Angels.

In fact, I could easily be talking about Guerrero’s quest for back-to-back MVPs if not for Ohtani’s two-way brilliance.

For how dominant he was last season, it’s easy to forget that Guerrero is still just 23 years old and seemingly just scratching the surface of his all-world talent – a scary thought for opposing pitchers.

At +500, the Montreal native currently holds the third-best AL MVP odds behind Ohtani (+350) and Mike Trout (+450). I expect Guerrero to have another productive campaign and be right in the thick of the MVP conversation once again at season’s end.

On this clip you will notice Vladimir Guerrero Jr. already balance before he taps back with his front foot. So he doesn’t have to try to get to a balanced hitting position, he’s already there! This is a big deal and if you corrects it look out for another monster season!! pic.twitter.com/2vsEpfYkkm

This one is banking on the brilliance of pitching coach Pete Walker.

Now, Jays fans are excited about the prospects of Walker having a full season to work with last year’s trade deadline acquisition Jose Berrios.

Berrios has always possessed electric stuff and at 27 years old still has room for growth. Expected to serve as the ace of the Blue Jays staff, the former Minnesota Twin could be set for career-best numbers and is a dark horse at his current +2000 odds.

*The Berrios prop selection is based on the assumption that Walker does not face significant time away from the team for a recent DUI charge.

An elite combination of power and a keen eye, Guerrero Jr. finished tied for the Major League lead in home runs last season with 48. Now, with a full 81 games back on tap at the friendly confines of the Rogers Centre, the 23-year-old has a realistic shot at becoming the second-youngest player in MLB history to hit 50 or more home runs in a season – just behind former Milwaukee Brewers great Prince Fielder.

Throw in the fact that the New York Yankees, Boston Red Sox, and Baltimore Orioles all have serious question marks when it comes to their respective pitching staffs, Guerrero could easily hold the home run crown all to himself at season’s end.

Guerrero (+900) could be the pick here as well after leading the majors in this category last year, but I will side with the better value in teammate Bo Bichette.

Bichette’s 121 runs scored were just two shy of Guerrero’s league-leading total of 123, with the former playing in two fewer games.

The 24-year-old will have no trouble getting on base after leading the American League in hits last season with 191 (second choice among hits leaders at +1100) and has the luxury of playing in the Jays’ star-studded lineup. Expect Bichette to touch home plate plenty in 2022.

Holding identical +1500 odds, this one is essentially a toss-up.

Both Gausman and Berrios should receive plenty of run support this season and find themselves well-positioned to rack up wins. If I had to lean towards one, it would be Berrios, given his ace role on the club’s pitching staff, but I would probably protect myself and have some money sprinkled on both.