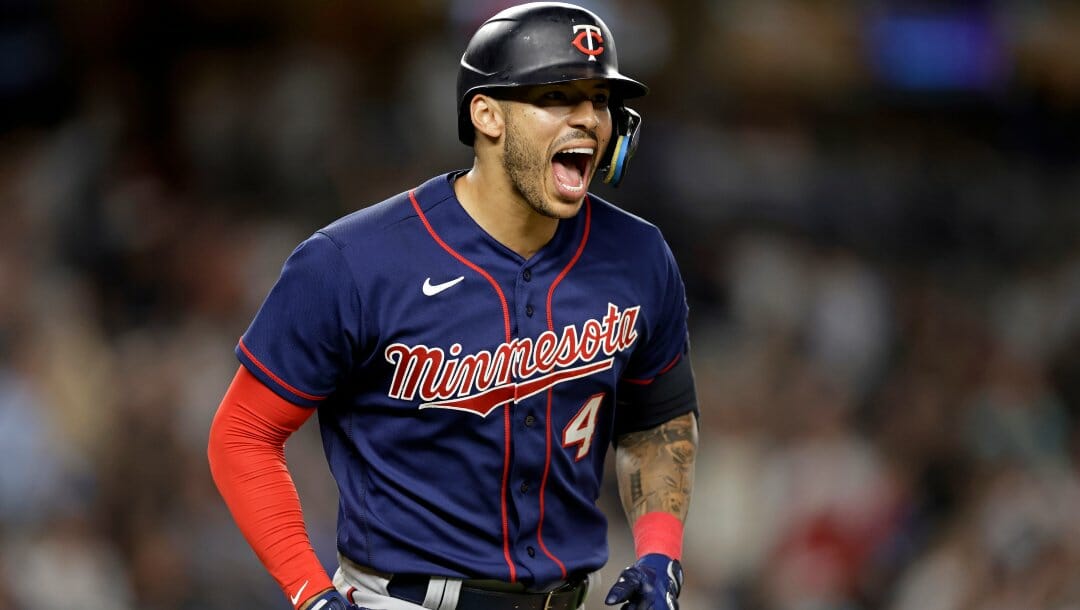 After an exciting few weeks of superstar free agents finding new teams before 2023, the offseason of mega-contracts experienced a giant (pun very much intended) upset.

The drama started Tuesday afternoon when the San Francisco Giants postponed their scheduled press conference where they were expected to announce the acquisition of star shortstop Carlos Correa. The team had agreed to terms on a huge 13-year, $350 million contract with Correa on Dec. 13, but an undisclosed issue with his medical examination meant things apparently needed to be discussed further.

Just hours after the cancellation, Correa agreed to terms with the Mets on a 12-year, $315 million deal, closing the door on the 29-year-old moving to San Francisco and throwing fans across the league into quite the tizzy.

The team also re-signed Brandon Nimmo (eight years, $162 million), Edwin Diaz (five years, $102 million), and Adam Ottavino (two years, $14.5 million), which puts the Mets’ total outlay this winter at $806.1 million. This is the most money ever spent by a team in a single offseason, and New York’s World Series odds after the spending spree sit at +650.

Making the chaotic turn of events surrounding Correa even more interesting is the fact that the Mets already have a star shortstop. The team signed Francisco Lindor to a 10-year, $341 million deal last offseason after trading for him in 2020. Correa is expected to play third base so that Lindor can stay at shortstop.

While player contracts fell through due to medical examination results in the past, this is the first case of this magnitude. Correa has been one of the hottest players on the market this offseason, and his deal with the Giants was groundbreaking.

So what does all this drama mean for Correa, the Mets, and Major League Baseball?

As mentioned, Correa agreed to terms on a 12-year, $315 million contract with the New York Mets. His previous 13-year, $350 million deal with the Giants would’ve been the largest ever signed by a shortstop in MLB history, but I’m sure we can all agree that $315 million is still nothing to scoff at.

Correa played seven seasons with the Houston Astros before declining their qualifying offer at the end of 2021 and signing a three-year, $105.3 million contract with the Minnesota Twins. His contract with the Twins included opt-out provisions after each season, which he exercised after the 2022 season to become a free agent.

Now, Correa’s new deal with the Mets is pending a physical, and considering we don’t know what went wrong with the Giants, there is always the possibility that this contract could fall through as well.

The Giants released a statement from the team’s President of Baseball Operations, Farhan Zaidi: “While we are prohibited from disclosing confidential medical information, as Scott Boras stated publicly, there was a difference of opinion over the results of Carlos’ physical examination. We wish Carlos the best.”

I’m not sure when the Mets’ offseason spending crossed over from politely luxurious to mildly unhinged, but it was probably around the $300 million mark.

With Correa’s signing, the team’s payroll for next season is estimated to be around $384 million, the highest in MLB history. As a result, the Mets are projected to pay luxury tax penalties (just penalties) of over $111.5 million, which is more than the entire payrolls of the Washington Nationals, Minnesota Twins, Arizona Diamondbacks, Tampa Bay Rays, Cleveland Guardians, Miami Marlins, Milwaukee Brewers, Kansas City Royals, Cincinnati Reds, Baltimore Orioles, Pittsburgh Pirates, and Oakland Athletics.

The Mets’ $384 million payroll plus $111.5 million in luxury tax puts the team’s total payroll, as of Dec. 21, at $495.5 million. No team in baseball history has ever topped $350 million, and the Mets are currently closing in on half a billion.

Major League Baseball doesn’t have a fixed salary cap. Instead, the league imposes a Competitive Balance Tax, referred to as the luxury tax, on teams that exceed a certain payroll threshold. This system is the only one in place to restrict big-money teams from spending exorbitant amounts to extend their advantage over smaller-market clubs.

The luxury tax threshold for the 2023 season is $233 million. Clubs that exceed the threshold are subject to an increasing tax rate depending on how many consecutive years they have done so.

Clubs are also subject to a surcharge threshold if they exceed the base threshold by $20 million or more.

This means that the highest threshold is $293 million — well below what the Mets are doling out. It’s clear that Steve Cohen is entirely undeterred by the idea of paying seemingly endless amounts of tax to get the top players he wants, so what comes next?

Until we see much firmer restrictions, money will always heavily influence, if not flatly determine, which teams can acquire star players. Some fans (probably Mets fans) would likely argue that isn’t necessarily a problem — Cohen is trying to win, and he’s worth $18 billion, so why not drop half a billion in payroll?

Still, there comes a point where spending this much over the threshold begins to no longer be in the spirit of the sport. Where does it end? Does it end at all?

But that’s not for Cohen or the Mets to answer — that’s for MLB.