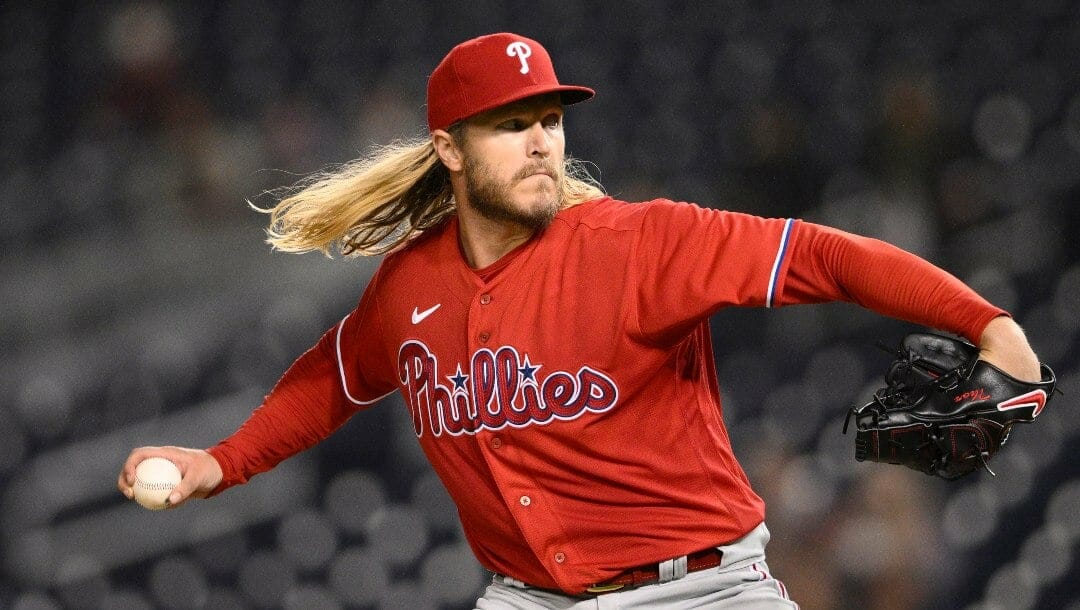 Noah Syndergaard had a busy 2022 season, and now that the 30-year-old pitcher is a free agent, it looks like the offseason isn’t going to be much more relaxing.

After seven seasons with the New York Mets, Syndergaard turned down the team’s qualifying offer at the end of the 2021 season to sign a one-year, $21 million contract with the Los Angeles Angels. Then, on Aug. 2, he was traded to the Philadelphia Phillies as a last-minute move before the trade deadline.

With the 2022 season now behind us, Syndergaard’s contract has expired without an extension offer from the Phillies, and he has entered free agency.

Back to back strikeouts by Syndergaard to end the 1st! pic.twitter.com/vR5qYSPXsy

When Syndergaard first arrived in Philadelphia, he was expected to be the missing piece in the team’s starting rotation, ready to lead the team to a deep playoff run — but that’s not how it turned out. Despite showing strong form with the Angels, Syndergaard struggled with the Phillies, ultimately finishing the season 10-10 with an ERA of 3.94 in 25 games (24 starts) between the two teams.

Having essentially lost his spot in the starting rotation, Syndergaard was decent out of the bullpen, but that wasn’t enough to get him a contract extension.

To be clear, an ERA of 3.94 in 25 regular-season games is still very good. Even just looking at the games he pitched in Philadelphia, Syndergaard recorded an ERA of 4.12, which is still decent. Honestly, the numbers are fine, but Syndergaard was expected to be great. Going into free agency, his value isn’t as high as it once was. In fact, he’s likely to be one of the most competitively-priced big names on the market.

Could a return to New York be on the cards?

Syndergaard was with the Mets from 2015-21, though Tommy John surgery meant he was out for all of 2020 and only pitched two innings in 2021. The team extended a qualifying offer for 2022, but Syndergaard chose to go to the Angels instead.

Assuming the Mets don’t feel too rejected by that decision, the team may just welcome him back onto their roster in 2023.

Prior to his injury, the Mets saw Syndergaard at his best.

He pitched the team’s only winning game in the 2015 World Series, and in 2016, he was named a National League All-Star and became one of only five Mets pitchers to strike out 200 batters in a single season before the age of 25. Even after a less-than-stellar season in 2022, surely his former glory counts for something in New York.

The last time @Noahsyndergaard pitched in the #WorldSeries, he brought the thunder! pic.twitter.com/PyxNwxaMB1

The Mets went into the playoffs in 2022 with extremely high expectations, having spent the entire regular season battling with the Atlanta Braves to finish on top of the NL East. Unfortunately, their postseason berth didn’t go according to plan, getting knocked out in the Wild Card Series by the San Diego Padres.

It was brutal, it was embarrassing, and it’s definitely not something the Mets want to repeat.

Winning 101 games in the regular season is certainly nothing to scoff at, but New York will likely be looking to tighten its roster significantly in free agency after the team’s playoff disaster.

Could bringing back a former star be something they’re interested in doing? Maybe Syndergaard will be returning to his old stomping grounds very soon.

The Rays had a good season in 2022, securing a playoff berth as the third AL Wild Card but ultimately got knocked out by the Cleveland Guardians in the first round. Going into 2023, the Rays are looking to contend again, and securing a somewhat-struggling star on a cheaper contract could be exactly what they’re looking for.

After Syndergaard’s less-than-stellar time in Philadelphia, his value on the market isn’t as high as it once was. If the Rays are prepared to take a shot on him returning to his former glory, this could be a great match. Tampa Bay isn’t known to spend a lot of money, so if the team can get him on a cheaper contract, it’s relatively low risk with potentially very high reward.

The Rays historically aren’t opposed to one-year prove-it deals, and that could be exactly what Syndergaard needs to get back into form.

Much like the Rays, the Orioles are a team looking to bolster their roster after a decent season in 2022, and a mediocre star on a cheaper contract could be a perfect fit.

Baltimore ended the regular season 83-79, barely missing out on a Wild Card spot to advance to the playoffs, so a contending year in 2023 isn’t off the table — if they make the right moves.

If the Orioles are taking contention seriously, they’ll be very active this offseason.

Their pitching staff of DL Hall, Grayson Rodriguez, Dean Kremer, and (hopefully) John Means is decent, but they need an ace pitcher to lead the starting rotation, as well as at least one more solid arm to support. I doubt Syndergaard would be ready to step up as the ace they’re looking for, but he definitely has the potential to be a great No. 2 starter.

On a cheaper contract in free agency, Syndergaard is a chance the Orioles may just be willing to take.