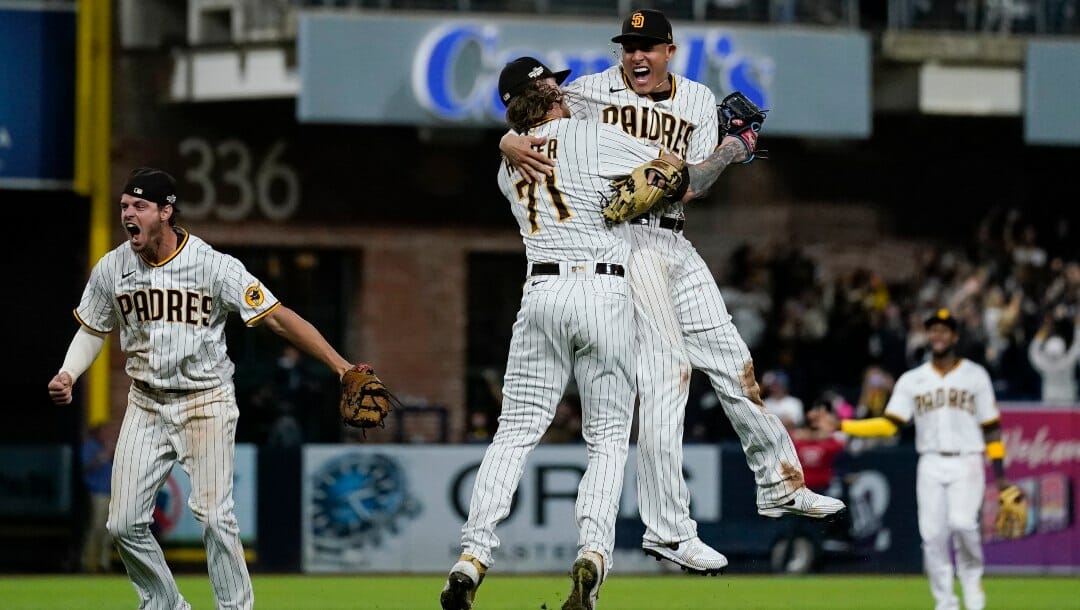 With the National League Wild Card Series and Division Series now decided, the MLB postseason continues on Tuesday, October 18, with the League Championship Series. Just four teams remain in contention — two from each league — and the pressure is on.

The Phillies will take on the Padres for a seven-game series split between Petco Park in San Diego (Games 1, 2, 6, and 7) and Citizens Bank Park in Philadelphia (Games 3, 4, and 5). The winner of this matchup will advance to the World Series to take on the winner of the ALCS.

Odds to Win NL Championship Series (as of Oct. 17):

I predict the Padres will win the NL Championship Series against the Phillies in seven games.

The Padres were arguably the most aggressive team at the MLB Trade Deadline, making big moves to bolster their roster for the second half of the season. All eyes were on San Diego to dominate in the regular season’s final months, but the team’s “win now” approach to player acquisition didn’t immediately appear to pay off as they would have liked.

Star outfielder Juan Soto wasn’t quite the difference-maker they were hoping for, controversial shortstop Fernando Tatís Jr. was suspended for PEDs, and if San Diego managed to get a playoff berth at all, it was generally expected to be rather short-lived.

Well, the Padres have officially silenced even their most judgemental critics, and anything that wasn’t clicking with the newly acquired roster in the second half of the season certainly appears to be working now.

In the Division Series, the Padres beat the Los Angeles Dodgers in four games, scoring 5-3, 2-1, and 5-3 victories in the second, third, and fourth games, respectively. Considering the Dodgers finished the regular season with the best record (111-51) and run differential (+334) in the MLB and were contending to be the best team in franchise history, this was a major upset, especially from a lower-ranking division rival.

Beating the Dodgers in the Division Series immediately after defeating the New York Mets in the Wild Card Series proved the Padres can’t be discounted as a pushover in the playoffs. The roster is stacked with talent — the front office made sure of it in August — and they are coming in very hot.

On the other side of the field, the Phillies have had a tumultuous year, but the drama seems to have only made them stronger — at least enough to win their way into the Championship Series.

And that is why we call him the MV3. pic.twitter.com/oKZjyE0KUE

In June, the team fired manager Joe Girardi. The Phillies started the season 22-29 and making a dramatic change to fix it turned out to be the right call. Bench coach Rob Thomson stepped up as interim manager and immediately led the Phillies to win 14 of their next 16 games.

The Phillies finished the regular season with a record of 87-75, securing the third NL Wild Card spot. They were third in the NL East behind the New York Mets and Atlanta Braves, who have already been eliminated from the playoffs. As they say, slow and steady wins the race.

In the Division Series, the Phillies beat the Atlanta Braves in four games, scoring 7-6, 9-1, and 8-3 victories in the first, third, and fourth games, respectively. The Braves were the clear favorite going into the series, but as the Phillies proved in the Wild Card Series when they beat the St. Louis Cardinals in two games, being the underdog doesn’t bother them at all.

The Phillies have shown over the last two rounds they are a force to be reckoned with. Arguably the most underestimated team of the playoffs, the Phillies came in ready to compete and are showing no signs of slowing down, regardless of what the odds say.

Throughout the regular season, the Phillies and Padres met seven times, and the Phillies won four games. The Padres won three games — two away and one at home — proving this will be a highly contested matchup, and even though I’m putting my weight behind the Padres, I can see this series being close.

Regardless of which team takes the NL Championship Series, it’s clear 2022 is the year of the underdog. The Phillies and Padres both went into the playoffs massively underestimated and have each knocked out top teams in the league. This will be a series to watch.