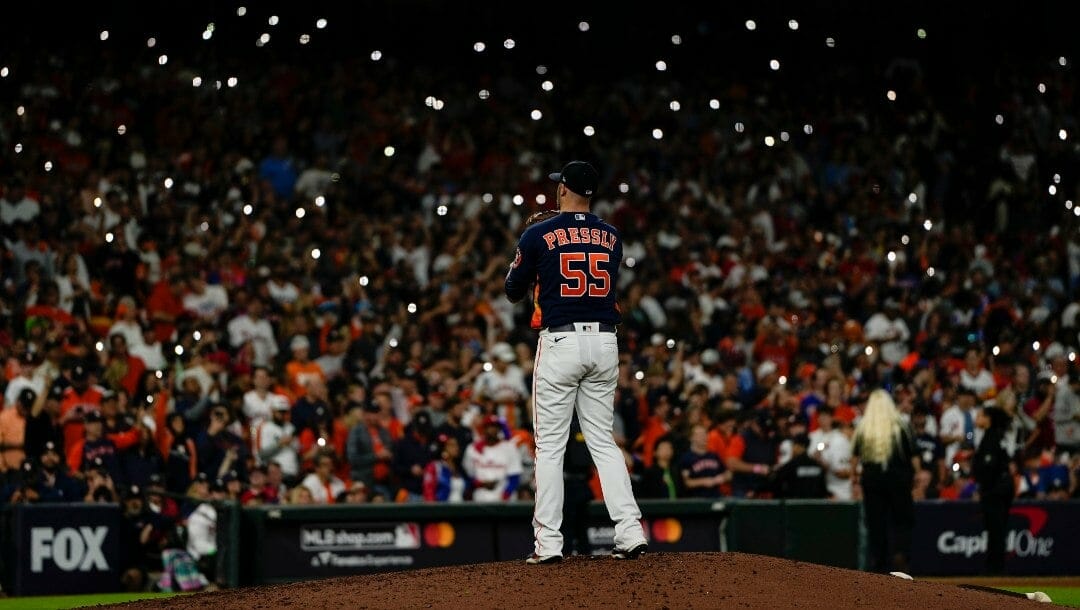 After two games in Houston, the 2022 World Series is still very much up for grabs. The Phillies took Game 1, and the Astros took Game 2, but even when on the losing side, both teams showed exactly why they’re the final two left standing.

The atmosphere in Houston was electric all weekend, with fans piling into Minute Maid Park to watch the home team battle for victory. Now it’s Philadelphia’s turn, and while the Astros have seen four World Series berths in six years, the Phillies haven’t played for a title since 2009.

So what’s happened so far, and who will win it all?

The first three innings of Game 1 were exactly what Houston’s home crowd came to see. Kyle Tucker turned on the Astros’ offense with a solo home run at the bottom of the second inning, immediately followed by singles by Yuli Gurriel, Chas McCormick, and Martín Maldonado to put a second run on the board. Phillies’ starter Aaron Nola was clearly getting rocked, and it didn’t end there — the third inning went even better for the Astros.

A double from Jeremy Peña and a walk from Alex Bregman put two men on base before Tucker went yard again. The three-run homer brought the score to 5-0, and everything seemed to be coming up Houston.

You come for the King, you best not miss. 👑 pic.twitter.com/RfBUTpJYKB

It didn’t last long. The Phillies’ offense needed a moment to heat up against the Astros’ ace Justin Verlander, but by the fourth inning, they were definitely ready to make some noise.

Singles from Rhys Hoskins, Bryce Harper, and Nick Castellanos, plus a double from Alec Bohm, and Philadelphia was on the board with three runs. At the top of the fifth inning, the Phillies continued their comeback with a double from Brandon Marsh, a walk from Kyle Schwarber, and a double from J.T. Realmuto.

By the time the Astros walked up to the plate in the fifth inning, the game was tied 5-5, and Houston never got that lead back. A solo home run from Realmuto in the 10th inning sealed the deal for Philadelphia, who won Game 1 of the 2022 World Series 6-5.

Now, it would be remiss for me to discuss Game 1 without mentioning the controversy that seems to have taken baseball fans by storm — Maldonado and the “illegal bat.” Basically, it was reported on Saturday that Maldonado had used a bat during Friday night’s game that didn’t meet MLB specifications. Naturally, Phillies fans have latched onto this and run with it, just as Astros fans likely would have if the roles had been reversed, but is it really a big deal?

Maldonado was gifted the bat by veteran Albert Pujols, and he used it in the World Series to honor him since 2022 was Pujols’ final season before retirement. The bat has a slightly larger barrel than is allowed under the current MLB regulations and is, therefore, illegal to use in any major league game, including the World Series.

Pujols’ bat was legal until 2010 when MLB changed the specifications due to safety concerns — the model was found to be more susceptible to multi-piece failures on the field than those with smaller barrels. However, players who debuted in the majors before 2010 were not required to abide by the new regulations, so Pujols, who debuted in 2001, used it for the rest of his career. Maldonado debuted in 2011 and therefore was not allowed to use the bat.

To be blunt, this whole thing is a ginormous storm in a teacup. Maldonado didn’t know the bat was illegal until MLB told him on Saturday morning, and MLB confirmed that the bat was made illegal in 2010 due to safety concerns — this is not a competitive issue.

Of course, baseball fans across the board are still furious about the Astros’ 2017 cheating scandal, so when you hear an Astros player’s name and the word “illegal” in the same sentence, we all immediately lose our minds, but this really isn’t Sammy Sosa with a corked bat.

Mistakes happen, and this one was inconsequential.

Imagine being so fierce on the mound that Twitter accuses you of cheating because you changed your shoes mid-start. Well, Houston’s Framber Valdez doesn’t have to imagine.

Game 2 started very similarly to the night before with an early lead by the Astros, but unfortunately for the Phillies, their incredible offensive comeback didn’t repeat itself. Valdez kept Philadelphia very comfortably at bay, allowing just one run and four hits in six innings pitched, but his decision to change his cleats and glove before the fifth inning set social media on fire with conspiracy theories.

Was he hiding something in his cleats? Was he cheating? In my opinion, he probably just changed his shoes, and everybody needs to go outside and touch grass, but whatever floats your boat, I guess.

#Astros starter Framber Valdez was asked about the insinuations online that he was using a substance. "They shouldn't think anything bad about it…I everything out in the open, in plain sight."

The Astros’ lead in Game 2 was quick and decisive. Back-to-back doubles from José Altuve, Peña, and Alvarez, followed by a fielding error on Gurriel’s hit, and Houston left the first inning leading 3-0. A two-run homer by Bregman in the fifth, and the score was 5-0.

A little familiar? Definitely, but unfortunately for the Phillies, a single run in each of the seventh and ninth innings wasn’t enough to fight back this time.

With a final score of 5-2 in Game 2, the Astros tied the series 1-1 to head to Philadelphia.

Before the World Series kicked off, I predicted that the Astros would beat the Phillies in six games, and I stand by that.

Philadelphia was never going to be a pushover. Between Bryce Harper, Kyle Schwarber, Nick Castellanos, and basically any other name you select at random from the lineup, the team’s offense is incredible. Houston’s pitching rotation is fierce, but as Verlander’s start in Game 1 proved, it isn’t impenetrable.

Regardless, I just don’t think you can stop the Astros in 2022. Peña is doing the absolute most to secure rookie of the year and possibly even World Series MVP, and Alvarez, Tucker, and Bregman came to fight for their rings. Even Altuve proved he’s gotten out of his offensive slump. Going into Game 3 with Lance McCullers Jr. on the mound, Houston is ready to prove they aren’t mucking around in Philadelphia.

The Wheels on the train go round and round. pic.twitter.com/VOuGo1wYsN

Having spent the last few days in Houston for the first two games, it’s clear that Astros’ fans are ready to move on from the 2017 World Series controversy and secure another title to laud. The way things are going, this series is likely to go back to Houston for Games 6 and 7, so they may even get to celebrate the win at home.

It has been a fierce competition so far, and I can’t see it slowing down in Philadelphia. Both teams are hungry. It will be a battle to the finish line, and I, for one, can’t wait to watch.

From spring training through the World Series, daily MLB run lines are available at the online sportsbook. Visit the MLB betting page throughout the season to view updated run lines and take your baseball entertainment to the next level!